To Be A Warrior: The Adventurous Life and Mysterious Death of Billy Davidson 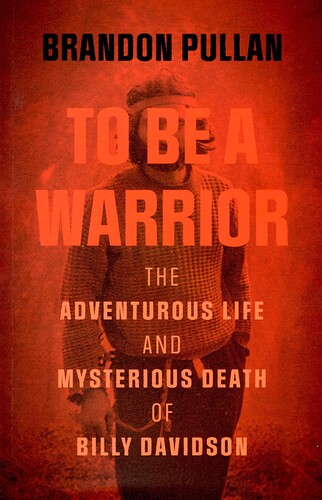 A new book has recently been released by Brandon Pullan chronicling the life and death of Billy Davidson. Billy was one of Canada’s premier climbers but for the last 28 years of his life lived out of his kayak on the coast of British Columbia and was known as “Kayak Bill”. Brandon is the Editor in Chief of Gripped Publishing who is behind Gripped Magazine, the climbing mouthpiece of Canada, and author of several excellent climbing narratives including “The Bold and Cold” and “Northern Stone”.

The first half of “To Be A Warrior” tells of Billy growing up in a Calgary orphanage, discovering climbing and becoming a renown aid climber in the Canadian Rockies and Yosemite Valley. The second half details his life after leaving the climbing world and moving to British Columbia to live out his kayak in a series of camps hidden in the most remote parts of the BC coast.

If you are curious and would like to learn more I would suggest that you start with this article on my blog written by Neil Frazer, author of “Boat Camping in Haida Gwaii” . There you will find several other pieces on Kayak Bill as well as a series of short articles that I have written during my 16 year quest to locate and document all of his camps.

Brandon’s book is destined to be on the bookshelves of many left coast paddlers as well as anyone interested in the hey days of the Calgary Mountaineering Club, its members and/or this enigmatic paddler who lived off of the land and sea. Billy’s climbing exploits were remarkable and make good reading on their own. Most BC paddlers have heard of Kayak Bill and Brandon’s book is the most complete account of what Billy was up to on their coast.

Billy earned some money by selling his paintings. A few of these can be seen here:
https://theeknesscollection.weebly.com/kayak-bill-davidson.html

I got this print through his son, Westerly. 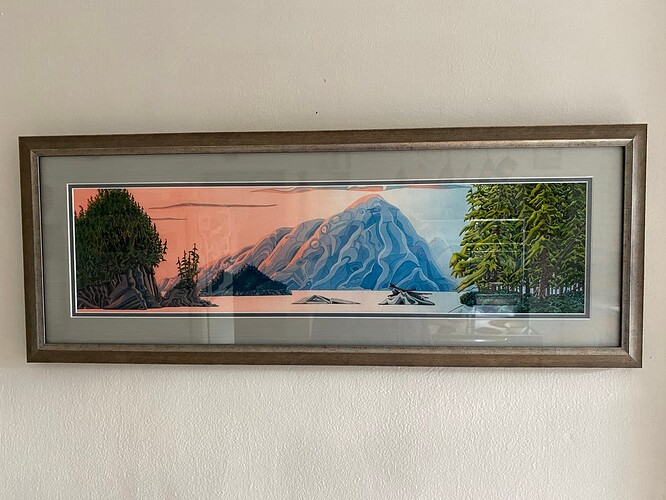 Lots of “faces” are imbedded into his paintings. They are worth a lot now but he didn’t make much off of them while he was alive.

That is a gorgeous piece of Art Jon.

Some person, ambitious (not me) and wealthy (also not me), should gather whatever of Bill Davidson’s paintings are available and house them in a museum at Echo Bay attached to Billy Proctor’s museum.

I’ve heard that Bruce McMorran (Paddlers Inn) has a couple of Bill’s paintings, actually in oil rather than water colour.