I experienced a broken leaf spring on my trailer while on the annual summer drive from Ohio to Maine. I thought I’d post some details on the experience as it might be useful to other trailer users.

My trailer is extremely light-duty. It has single-leaf springs and is only rated for 350 lbs. load. I use a removable box to carry large, bulky items out of view, with a kayak on top if needed. Once at my destination, the box comes apart and I’m left with a simple flatbed with crossbars to haul just the kayak. The trailer was loaded to near the 350 lb. max for this trip but not overloaded. Note that the flatbed and box are lightly built, but still consume about 130 lbs. of the load capacity.

So, leaving our motel in the morning on day two of the drive, I noticed the trailer sagging on one side after we’d driven a half mile or so. Fortunately, we weren’t back on the interstate yet. Also, fortunately, I was right next to the back driveway of a Sam’s Club and could pull right in out of the way. I quickly saw that the tire was pressed up under the plastic fender, and the fender was supporting all of the load. Here’s a photo of the broken side, after removing the fender and jury-rigging an axle support to make it drivable to limp back to the motel. 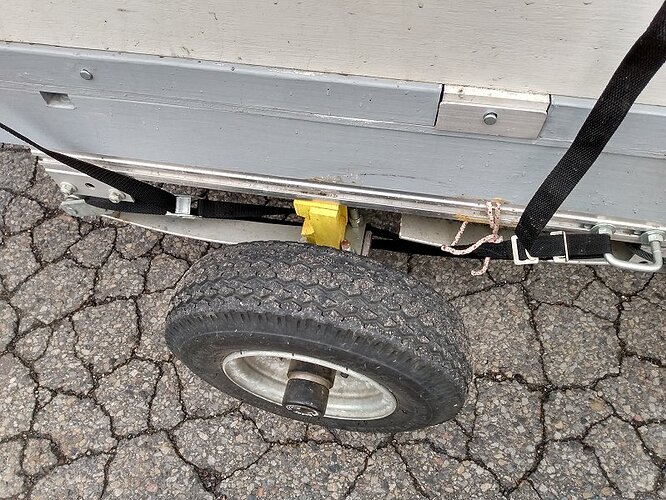 So, some things that went right and a couple of lessons learned: 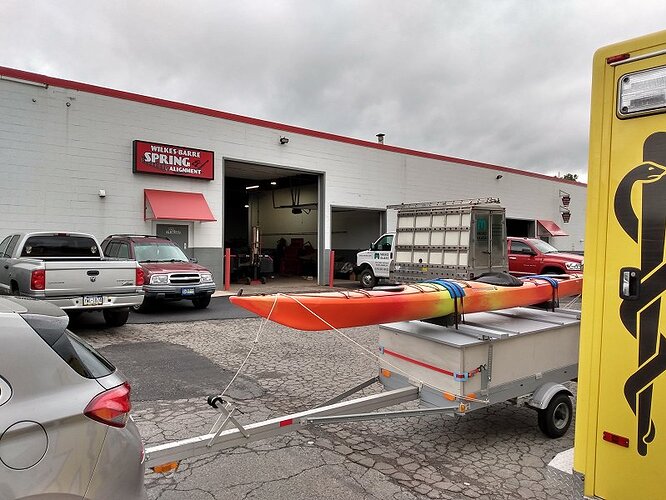 A lesson learned might be not to run my trailer at its rated load capacity. The new springs are a lot stiffer, so they can support more load. But I don’t plan to push it with the long aluminum tongue. And not really a lesson learned, but thanks to any higher powers that this happened in town, not at speed on the highway, not 20 miles from the nearest exit, and with a spring shop a mile away. I was super-lucky.

I’m going to add that emergency axle-support block to my travel kit. I already carry two spare wheels and tires and several straps and ropes. Back when I had a Harbor Freight trailer with “oddball” metric bearings, I also carried spare bearings and seals with me. Common inch-size trailer bearings are readily available at Walmart, Tractor Supply, etc., and I always figured i could buy some on the road if needed. But I think I’m going to buy a set and keep them with me now too.

So, sorry for the long story. It’s a saga of a minor inconvenience that could have been a lot worse.

I would say you were very lucky and got off for a very good price. There are still some good people out there that want to help.

One thing to keep in mind with trailer bearings they are cheap little bearings and need grease regularly. When your car is going 60mph those little trailer wheels are doing 2-3 turns for every one of the car. So they are seeing speeds of 120-180 mph. Worse they don’t get driven daily and take in water and sit and rust. When one burns up it might not be a case of just having a spare and putting it in. they like to weld themselves to the spindle or wear the fits where you need a replacement spindle assembly.

The heavier leafs will carry more load but will ride rougher and subject all the rest of the trailer to more stress.

I like how you are setup with the box and that’s a nice height for loading the boat. High enough to see it also for backing up.

My check for the bearings is to put my hand on the hubs at every stop to see if they’re getting any warmer than usual. Also, a test drive at speed to check temperatures before the big trip. I hope that will catch a failure before it happens.

The hubs are usually comfortable to touch without any distress, like a hot shower so maybe 110 deg F at most. That’s actually running pretty cool in the bearing world.

Oh, and I have 8 inch wheels, the tiniest they use on trailers. So, yes, they are spinning at 2+ times the RPM of car’s 17 inch wheels. The light load on the trailer probably helps a lot.

Its interesting to see the ingenuity and here the recommendations. Fortunate that you found such great people to help service the problem.

[quote=“Wolf”]
My check for the bearings is to put my hand on the hubs at every stop to see if they’re getting any warmer than usual. [/quote]

Did exactly the same thing with a new (to me) trailer last night. Previous owner was unaware that the bearings needed routine maintenance. I’ll inject some grease this week…should have done it before the 70 mile trip, but… 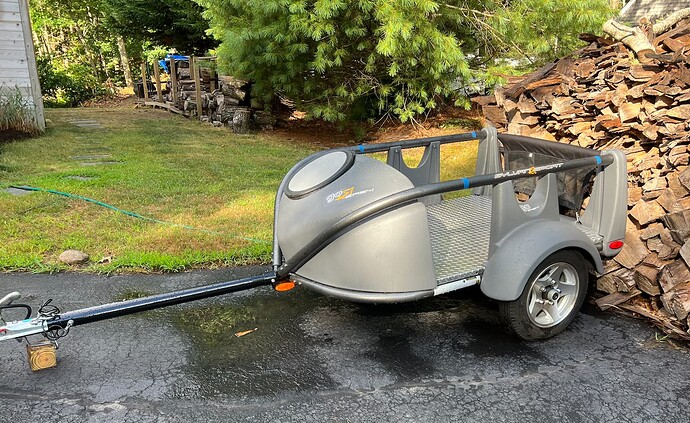 This happened to me on a dirt road 10 miles from the highway on the Rio Chama. Ended up having to drive almost to Albuquerque to find a Tractor Supply that had the replacement spring, then go back and fix it in camp. Good thing everyone in my group is good with tools. We got it changed in a little over an hour (after the 4 hour drive to find the parts). Lesson learned. I always carry a spare as well as an extra set of wheel bearings and tools when I am going to be far from home. Some days a spare tire just ain’t enough.

that’s a cutie… Can you load boats on it?

Yep. The Thule 450 or 450R feet mount on the top side rails and you can then use a standard Thule bar and kayak mount. With the longer version of the tongue (installed on my trailer) there’s clearance for a couple of 17-18’ kayaks. The trailer weights 300 pounds and can carry another 500. The suspension is designed for this weight, so there’s no bouncing or abuse of the boats or bikes on top…