Tripping Gear - Are barrels worth it?

Hey,
I’m planning my first expedition and I’m wondering… are the blue barrels worth it? They seem expensive. So do Portage packs. What is a cheaper alternative or are the worth it enough for me to get them for the full price point. (Aprox. $100)

I have a couple dry bags that I planned on using.

Will there be bears where you camp? Makes all the diff.

From what I’ve seen, there is a small population of Black Bears. However, most of the camp sites along the river are pretty well established and the chance seems small.

For me the major benefits of blue barrels are that they are relatively rodent proof. I have had soft coolers and packs destroyed by raccoons and I have been run off of a nice island campsite in Quetico by starving squirrels. While blue barrels are certainly not bear proof in that a determined bear can crush one easily, they are watertight and virtually airtight and if you keep food odors off the barrel exterior a bear is much less likely to detect food in a blue barrel than in a soft pack or bag of some type. I know experienced northwoods trippers who ceased hanging food packs in the Boundary Waters or Quetico years ago. They keep food in barrels outside the camp perimeter, securing them between closely spaced tree trunks with straps and they report never having had a bear issue.

Having said that, blue barrels have some drawbacks apart from price and weight. They are not very comfortable to portage any distance although a decent harness makes it tolerable. They are very good at protecting your back from hard objects but rectangular items don’t always pack very efficiently in a cylindrical container. The locking rings are relatively easily damaged if you accidentally step on them. And blue barrels don’t always pack into canoes as efficiently as multiple soft packs can. Some canoes are narrow enough between the gunwales and have thwarts placed in such a way that it might be impossible to fit a 60 liter barrel into the boat as the barrels are usually too wide to slip beneath thwarts.

You can sometimes find used blue barrels at a good price on Facebook marketplace or ebay. These barrels are used to transport medications, spices, and other food stuffs and are usually not reused. People buy them at their points of destination and resell them for a small profit. I have acquired several of my barrels this way and they have been in good condition but some have retained a pretty strong food odor for some time.

If you don’t need to carry a lot of food and don’t want to pay for barrels you could go with one or more 5 gallon poly buckets with Gamma lids. You can buy Gamma lids on Amazon and they are not terribly expensive. The buckets are widely available at hardware stores and the like and usually only cost a few dollars. The Gamma lids have screw tops with a vinyl O ring and they are a press fit onto the top of the bucket. In order to insure that they are as watertight and airtight as possible I use silicone caulk around the underside between the Gamma lid ring and the bucket itself.

Good to repel animals and water, but awkward to pack. Hard to get a harness to fit. I like Duluth Packs.

I use a 30 liter barrel for food and cooking gear that I haul inside a big nylon Duluth-style pack. Works well.

Depends on what you mean by expedition. I have had a 60 l barrel and a 30 liter barrel and a harness that fits both by Ostrom . Harnesses are not hard to fit but some are not as comfy.
The harness makes carrying the barrels quite tolerable. Yes it is an investment so I ask how and where are you going and is this going to be a lifestyle? Are we talking two weeks months or days?

Barrels are not bearproof per se but bears are creatures of habit. If they have found good pickings at your campsite in the past ( from what others have left) you can expect them to return. I avoid campsites that are overused or have evidence of fish cleaning. Also don’t camp in berry bushes.

I just stash in the bush away from camp. In some places there are no suitable hanging trees for anything. Ie the Arctic and taiga even boreal forests like Wabakimi has.

Some Gamma bucket lids leak so yes as above you have to caulk. The barrels have a silicone internal ring and a clamp that forces the lid down. Never had a leak. My barrels date from 1995.

The trip looks to be about 2 weeks.
You’ve given me a lot to think about.
Thanks!

Most of us never started out with money to burn. If you can find any pack that holds a contractor garbage bag or two and a bucket you are off to a good start. When you get sucked into canoe trips as a normal part of life then you can splurge. Even an internal frame backpack from old timers will work.

I have a 30 liter open top drum (barrel) with a somewhat squared off shape that I have used in a Duluth Pack camp kitchen pack and it fits quite well. The squared off shape is a bit kinder to your back. I can’t recall where I got the barrel. I thought it was from US Plastics but I can’t find it on their website at present.

Someone posted on another forum that you can order them from Home Depot shipped to the store for about $55 bucks.

I did find this:

Large blue mixing barrels holds up to 15 gallons of material. Use to mix self-leveling material, or other large quantities of construction materials. The barrel is made of high-density polyethylene (HDPE)

However, a number of people asked whether the barrels were air tight or water tight and the answers were contradictory but several said no.

We use our 60l barrel to store our tent, sleeping bags, thermarests, extra clothes, electronics, etc. because it is completely water proof. It is also so easy to pack, so it saves time. I took an old pack and use it as the harness. At night, we put our food into it and put it in the forest away from camp. 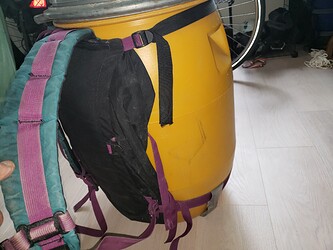 If you leave the lid on and the barrel clamped tight for months you do lose the seal because it becomes permanently compressed. I always store mine lid off clamp hung up and never had a lack of watertightness. I use Recreational Barrel Works barrels. Maybe too costly for some but they have lasted me over 15 years for the little one and 25 for the big one. Pretty cheap per use thus

Yes, I agree. But the question asked was whether these new barrels from Home Depot, which are marketed as “mixing barrels” are either waterproof or airtight and some answered “no” to each question. I would like to hear a review of these from a paddler who actually submitted them to the test as the price is quite decent.

aah your question… Not the OP question. Thread drift aka conversation. I don’t have an opinion on HD as we don’t use that store around here.

For extra security regarding whether a container is leak proof, just put a drybag inside of it. As it will be externally protected, even a heavy duty contactor’s trash bag would probably be sufficient.

I had good luck with olive barrels from ethnic grocery stores and delis. They’re smaller than the “blue barrels” and will actually roll under the thwarts in my canoe, so loading up is easier. I found a Duluth-type pack that would hold two of them . Worked great

You can find the barrels for less on E Bay as used pharmaceutical barrels. I paid like $40 for mine and they look just like the harmony barrel. However I don’t particularly care for them as far as keeping things organized. I end up packing cloth shopping bag with stuff to keep it neat, but you still end up having to pull everything out to find anything. If I was going for a long period of time (like over a week) I would use them for storage. I usually use a large roll top duffel dry bag. They take up the same space in the boat and you can see every thing without having to dump it out. If I am going to bear country, I use a 30 qt Wal Mart Yeti knock off cooler. It has the big rubber latches and you can hoist it up in a tree. I know for sure that bears can’t open it because I watched them try one night (not on purpose).

I’ve had success on trips up to 5 nights with my internal frame backpacking pack. It doesn’t fit in my canoe crossways and so takes up a bit of room laying longways in the canoe, but it’s great for portaging. On some canoes the yoke will sit nicely on the pack, allowing for single portage trips instead of 3 (one for the pack, one for the boat, traveling back to get the boat). Since I often paddle a 15ft canoe solo space in the boat isn’t an issue. I pack critical items in dry bags or doubled contractor trash bags inside the pack. I tripped with a friend who used barrels. It was good for keeping critters out, as other say, but I could barely lift a 60L barrel loaded with food.

I usually trip in areas of the Adirondacks where bears aren’t too much of an issue and hang my food in a stuff sack to deter raccoons and squirrels - so far so good. On river trips with no portages I throw everything in individual dry bags and food in a hard plastic cooler (cheapo) that I strap shut at night to keep the raccoons at bay.

All of this is to say, I don’t feel that I trip enough to justify a Duluth pack or barrel - I try to get by with multi purpose gear I already have.