I’m new to this forum so I hope this hasn’t been brought up before.

Does anyone have any suggestions for tropical/warm water multi day kayaking locations - the caveat being the ability to hire kayaks on location.

Ideally looking for places with wildlife and or snorkelling/hiking opportunities - sea or flat water/river, and unsupported camping. Cost is a factor, hence why organized tours aren’t really possible.

My GF and I have done a couple of such trips (Belize and Coron - Philippines) and have a couple of other locations we’re planning (Baja/Sea of Cortez with our own kayaks and Papua Indonesia) but I’m always on the lookout for others, so fire away if you know of any.

For others interested in this topic we’ve used Tribal Adventures in the Philippines (Coron) and Kayak Belize for our Caye trip. Also Kayak4conservation is on our list for an Indonesian trip (guide required and kind of expensive). The San Blas Islands in Panama is also one area I know of.

Any other locations or links would be appreciated.

Not sure where you are but most years I spend two weeks in the backcountry of Everglades National Park and launch from Everglades City where you can rent kayaks.

It is especially nice in birding season. Dolphins abound.

I suspect you are from the West or South Pacific. Everglades is not tropical though and the Gulf of Mexico is not prime snorkelling territory. The water gets roiled with periodic north cold fronts and is not that warm.

You mention using your own kayaks for the Sea of Cortez – I presume that is because you can drive there from home?

Have you considered investing in folding kayaks for your travels.? Since it’s clear you like the freedom of multi-day trips and exotic locations, that would give you much greater flexibility and save time and money.

I’ve traveled with my own folders since 2002 as well as renting on some trips. I much prefer having my own boat. Renting not only eats up your time in locating, picking up and returning the gear, but it usually limits the locations from which you can launch and even your scheduling. Not to mention that it can be costly and you can’t always find quality boats and gear in the most interesting destinations. Even with the excess baggage charge that you might incur for having an additional rolling duffel with your boat and paddling gear in it, that is generally not much more than a single day’s rental for an outfitted kayak.

The photos below show the 32" by 16" by 14" rolling bag in which I took my 24 pound PakBoat folding kayak and ALL my paddling gear overseas two years ago – total weight was 48 pounds and second shot shows everything that was in there including a 4 piece carbon paddle, all my clothing and safety gear and an inflatable car roof rack system so I could haul it on the rental without damaging the car. (at that time, Icelandair allowed two bags within the “carry on” parameters free so I paid no excess baggage fees at all for this in addition to a smaller rolling duffel with my other clothing and travel kit in it).

Pakboat’s current convertible folder, their seaworthy 15’ Quest 150, which can be used open or with the removable deck (which makes it great for hauling camping gear) weighs 31 lbs. I have the smaller prototype for this model, the Quest 135 (not the one in the photos posted – that is a smaller 12’ Puffin model). I am linking this catalog listing since it has clearer information than PakBoat’s own website (they make great boats but aren’t the best with social media promotion or marketing). You can buy direct from the Pakboat HQ in New Hampshire, and of course, they can ship them by mail. Pakboats' Quest 150 foldable kayak is a compact touring model with a folding skin-on-frame design durable enough for the demanding paddler. It is long enough for effortless cruising, and roomy enough to hold your over-night camping gear,... 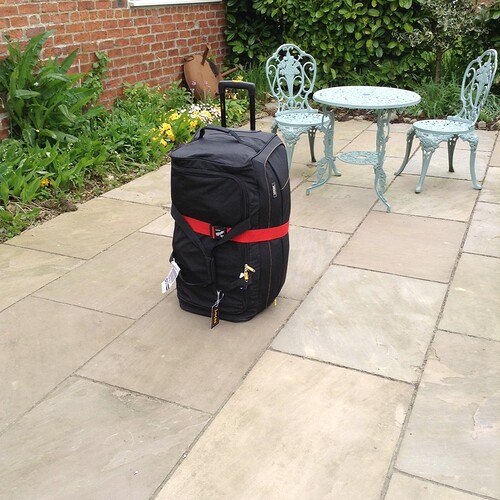 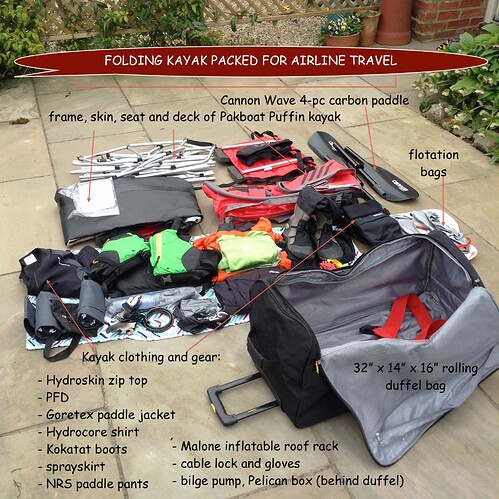 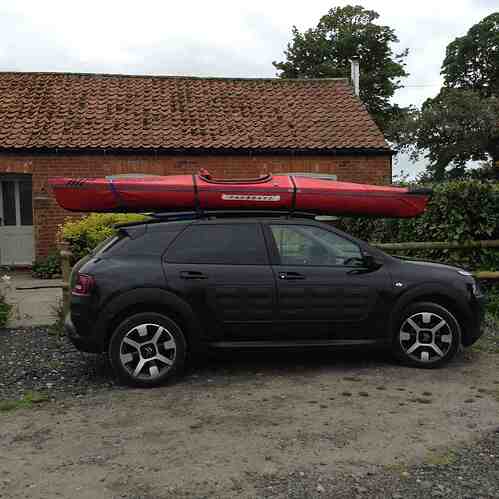 +1 on the folding kayak. Picked up an older K2 Feathercraft for a decent price with the intentions of kayaking unsupported all over. They’ll truly open up the world to you, if you don’t mind the excessive baggage fees of course. Heading to Baja next month for 2 weeks!

I yearn to circumnavigate and kayak surf lots of Puerto Rico. There just were not any sea kayaks available that I could find while working there. And the SOTs were super stable, fleet tour quality boats.

Emilio: Even with excess baggage fees, bringing a folder along ends up being cheaper than rentals especially if you want to kayak every day. The 87 pound K-2 tandem is a problem because just the skin is probably over 50 pounds so you can’t really split it into two bags that are under that maximum limit – same with the 50" packed length. But two solo folders (like a pair of Pakboat Puffins or Quests) could be packed with all the gear you need for paddling in bags that are under the “oversized baggage” parameters.

By the way, somebody who travels with folders recently tipped me off that on some airlines, SUPs can be checked without oversize penalties. So it could be if you could pack a tandem in a couple of SUP carrying bags you might be able to reduce the baggage penalties.

I took an inflatable to Costa Rica (Golfo Dulce, then overland to Drake Bay). Lots of load capacity and very user-friendly, but not very fast and not a lot of space. Then again, compared to colder climates, it is very easy to pack light. We didn’t camp, but stayed in several inexpensive accommodations I found on booking.com (maybe $30usd per night on average). I’m sure camping is possible, but with the extra baggage needed to bring that gear and the uncertainty of where camping is allowed it was much easier to skip camping altogether (also more comfortable and we got to meet lots of nice people). I started planning this trip by looking where commercial outfitters go and modifying the itinerary to make it more affordable.

The Sea of Cortez, the Barrier Islands on the Gulf Coast of Fla or the Keys would be my first choices.