New kayak (and truck!) owner here. We recently picked up a 13’ Crescent Crew and had the Yakima Longarm. I also considered the Boonedox T-Bone. My question is, for experienced trucks and kayaks owners, have you seen the need for an extender like these or can we get away with just strapping it down to the bed comfortably?

The dealer actually showed us how to tie it down using the points near the tailgate. At that point, the kayak and Yakima had about a 3” gap. I could still tie it together, but theoretically it’ll just be pulling the arm up against the kayak rather than the kayak resting down on the arm. I adjusted it all the ways I could and could never close that gap.

In any case, we drove from Iowa back to Minnesota with no issues. This led me to be curious if anyone else found a real need for the truck extenders in similar situations.

In the long term, we would probably be carrying two similar sized kayaks and one youth.

Hi. Welcome. My truck has the same box on it and I just purchased a bed extender for my truck on Saturday. I recently acquired a 14’6" Kayak that extends too far beyond the tailgate and my comfort zone. I also padded the cross bar with a pool noodle to close up and gaps and protect the hull. Until I got the new boat I never have anything longer than 13’ in it and never had a problem.

I sewed some 3" wide web strapping to make a loop large enough to go over the end of the kayak. From the closed loop there’s a 2’-3’ length of the strap that ends in a small loop.
I used four of these to suspend two kayaks inside an enclosed trailer when we were moving.
I have used one of the loops to secure a kayak in the short bed of my Tacoma. I slip it over the bow of the kayak and it slides down a couple of feet to where the yak widens out. I then run a ratchet strap through the small loop and secure the strap at tie points in the bed. It’s like using a lasso, if that makes sense. I’ve used it both with and without a bed extender.
Regarding a bed extender, I like having it. I saw one on the Harbor Freight website, advertised as a 36" extension. I went to pick one up at a store and I was pleased to see it was actually 48".

Thanks! Nice. I thought it hang more than comfort, but the 13’ overhang wasn’t too terrible actually. Like you, probably the max threshold I would be ok with. I can only imagine the 14’6" overhang!

Thanks otay. I will check that out as a replacement for the Yakima especially at their usual price points. With your strap ideas, may not need it though. I’ll play around with that to see how it goes. Thank you! 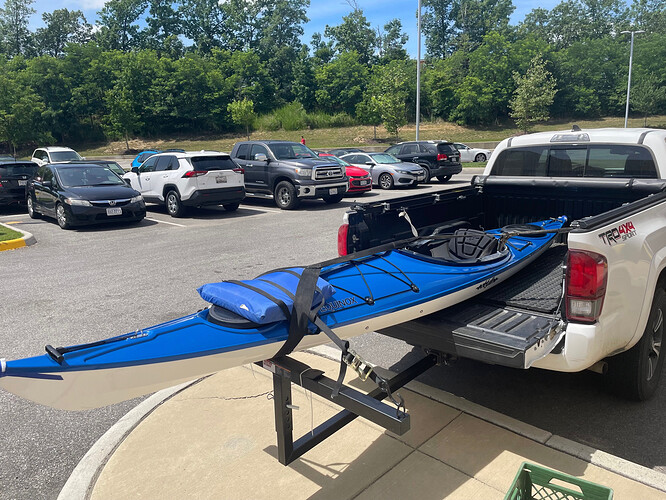 I use an extender on my Tundra with 14 and 16’ boats. They are strapped to the bed by using the tailgate hardware and I also strap them to the extender.
Have been doing it for a few years including to FL and back.
Only one problem. A kid in my neighborhood wasn’t paying attention and ran into the boat. Didn’t damage the plastic boat but bent the extender.

I had an F150 with a 7-foot bed, and I had two 14’ kayaks. Using my crude woodworking skills, a 2x4, a 1x4 and a band saw I made a cradle for the boats and bolted it to the end of the lowered tailgate. I also installed two eyebolts low down in the front wall of the bed, and eyebolts at either side of the hull-fitting cradle pieces. Very secure and very easy to use. Only problem was you had to take care on rough back roads.

In Florida you need a tail light on it at night and flag in the daylight. Anything that extends more than 4ft. See what the requirements are in your state.

Ps we have used a clip on bicycle tail light.

I shamelessly stole this link from some other thread:

How Far Can Stuff Hang out of Trucks? (Numbers per State!)

I know a guy who uses the cheap (Haul Master?) bed extender from Harbor Freight. It seems to work just fine for him.

I have the Harbor Freight extender. The adjustment holes allows it to be even with the bed of my 2016 Silverado.

Thanks raos! So based on this logic, does a tailgate extender theoretically increase the “rear” of the vehicle even further? So if it’s the box is 6.5ft and the tailgate adds about 2ft for a total of 8.5 ft, would a 4ft tailgate extender make the rear 10.5ft?

Sounds like a lot of fans for the Harbor Freight one, will give it a go if it can get leveled with the bed of the truck!

I am no expert on that. Near the end of that longish article it talks about how states have different ways of measuring the overhang. If you are going to have a long overhang it would be wise to look up the regs in your state for more clarity.

It might go without saying but over the years I have hauled 100s of extended loads in my truck and the best way I know to not be stopped is if you are running a red safety flag.

Thanks raos! So based on this logic, does a tailgate extender theoretically increase the “rear” of the vehicle even further?

Federal law and most states consider anything that extends beyond the rear bumper or body of the vehicle as an extended load. So no, adding an extender does not increase the length of your vehicle. Some states measure overhang from the wheelbase.

Federal DOT regulations allow a 4’ overhang. Beyond that length the load must be flagged in the daytime and have lights at night. Meeting the letter of the law can be rather detailed. State regulations are all over the place and can have requirements for loads that extend less than 4’ and may have limits of no more than a 4’ overhang, especially for non-commercial vehicles.

For loads extending less than 4’ flagging is still always a good idea. Check raosborne’s link to determine the laws for the states that you will be driving through. Flagging is generally enough, but fines if you run into a cop having a bad day or your kayak is involved in an accident can be high.

A heads up for anyone using a bed extender for the first time. Because the extender is considerably longer than your wheelbase you WILL bottom it out if you go up an incline like a driveway apron. It happens going forward and in reverse.