Since the local rivers are frozen and I am too much of a wimp to struggle into my drysuit and venture out solo, no paddling for a while hereabouts. But I have tried, since my gym closed due to covid, to keep up my stamina and fitness (and mental health) by doing 1 to 3 hour hikes a couple of times a week through 20 some miles of rolling hilly terrain in the 600+ acre wooded Frick Park 5 minutes drive from my house. Alas, that fitness option is in limbo for now.

I suspect everybody in the US (and Canada, at least) has seen the images of the 450’ four lane roadway bridge that suddenly collapsed last Friday morning. Photo below shows it laying in the 100’ deep valley. That “little” red thing is a double length articulated city bus that weighs about 20 tons and rode down on the eastern end slab. Had this happened just an hour later there could have been over 60 cars and over 100 people involved. Only 4 cars (and 4 people on the outbound bus) and 10 injuries. Nobody died, thank heavens. A couple with cracked vertebrae still in the hospital.

But this hit close to home since I had hiked under and then across that very bridge on foot 36 hours before the crash and drove across it twice 10 hours prior to the event. Yikes, creepily close call. This bridge was a key route in my commutes for decades and still a near daily path in recent times for errands and exercise. The city and cops have closed the entire park as NHTSA inspects the disaster site, though it only affects a couple of acres in one tiny area. Thousands of us perambulators, runners, dog walkers, mountain bikers, etc. have been warned to stay away (though some are apparently sneaking through the woods commando style). I have mixed feelings about seeing it in person.

We do have some other smaller parks in the area so I guess I need to expand my routine for the time being. Still a bit in shock over this. Traffic today was reportedly a disaster with this major commuter link gone. 15,000 vehicles and two transit lines had to find an alternate route around the sprawling valley that is that park. The bridge was the only way to traverse it by vehicle. Don’t know if it’s still true but Frick Park used to be the largest natural park in any major US city with no road going directly through it.

Reality check: We have over 1500 bridges in our county and a third of them have the same “poor” inspection rating as this one. No way to close even 10% of them without paralyzing the city. I did always kind of wonder about this one, being such a long clearspan with no midspan piers or support. Clear to me that each of the slabs sheared clean off at the expansion joints with nothing below to prevent them from seeking the natural angle of repose. No way to get heavy equipment or trucks to the site below without building a half mile or longer steep graded road from either end of the park so they are setting up a tower crane on the now abrupted roadway-to-obiivion above to hoist out the debris. 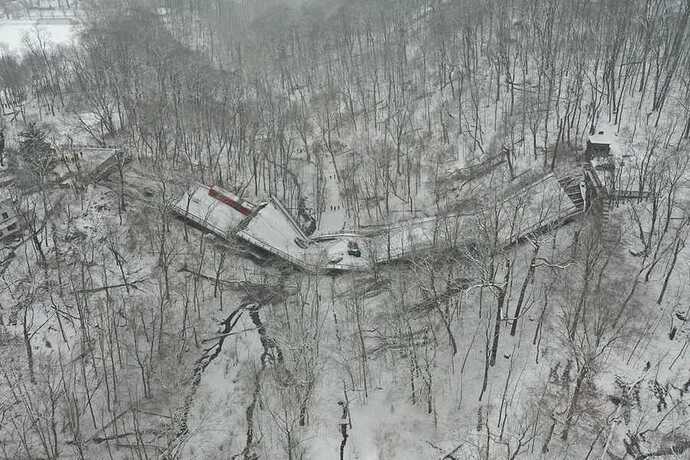 I live in West Seattle, which is a part of Seattle that is separated from the main downtown part by a narrow waterway. There is a 3-lane (in each direction) bridge that connects my area to downtown.

However, this bridge has been closed since March 2020 and it still isn’t open, due to cracking discovered. This bridge normally handles the most vehicle traffic of any bridge in Seattle, and yet suddenly people had to make do without it. There is an alternative bridge that is also a drawbridge and it gets very backed up during commute hours now. Also there is a lower bridge beneath larger West Seattle Bridge that only public transport or emergency vehicles can use. Taking the bus is a viable option to get downtown and it can use that lower bridge, so it doesn’t take any extra time. Also I’d guess 30% of Seattle is working remotely right now (higher than the national average of 20% is why I chose that number, due to more software people like myself here).

Infrastructure is huge problem in the US now. Luckily the large infrastructure bill was passed and the money is really going to various communities including PA and WA bridges. Let’s see how well the money is used to truly bolster the quality of the bridges and roads.

The other way to look at this is that these things just happen from time to time. The probability of being on or under a collapsing bridge is infinitesimal. Freak things just happen and we all just go through life accepting these risks that are out of our control.

I can imagine how Seattle could be a complicated situation the way it bestrides waterways. Pittsburgh is divided by 3 major rivers that are part of the Mississippi drainage and geographically it is a plateau that was stream cut by all the creeks ands runs feeding those rivers for millions of years, though most was after the last Ice Age – the terminal continental glaciers were about 50 miles north of us. So the whole place is a maze of tight steep valleys, some with permanent water ways and the rest dry but all flanked by tall narrow ridges. We still have commuters who use near vertical cable cars. And we have more bridges than any other major modern city. in the world. Can’t drive more than a half mile in any direction from anywhere without some kind of bridge or a causeway hung along the side of a cliff (or a tunnel under one). Rockfalls and avalanches blocking or collapsing roadways are a regular thing. We have shitty geology, all busted up shale and other sedimentary junk. Plus the whole area is underlain with abandoned coal mines (one under each of both the houses I own). Thanks heavens we are not in an earthquake fault zone.

A complication for the bridge that fell was that it was owned and “maintained” by the City of Pittsburgh rather than the County or PennDOT or Feds. It was built in 1970 but we had a mayor in that era who did not believe in paying to maintain anything and the budgets were slashed for several of his terms so taxes could go down. We have been paying for that decade + of neglect ever since.

I’ve had way closer calls than that one. In 1985 when I was a construction worker I had just climbed down for lunch break from working with another electrician installing large conduit runs along the railing of a 40’ tall 3’ wide stone and concrete prison yard wall (where the guards patrolled the exercise yard below between the watchtowers) . usually we left our tool boxes there but for some reason I decided that day we should move them to the nearer guard tower on our way down. Just as we exited the spiral staircase below that guard tower onto the street outside the sally port we heard a tremendous roar and turned to see the wall behind us which we had been standing less than 2 minutes before topple and collapse backwards into the prison yard. As the dust cleared there was nothing but sky where we had been working and a 20’ pile of rubble that had buried the backhoe parked below. Sirens and alarm horns were screaming and guards were hauling machine guns out of the towers since the max security walls were now breached and the whole place went into lockdown.

Turned out that wall in the 120 year old jail had been an extension to the yard that somebody had built without digging down a competent foundation and when the backhoe began trenching near it the side of the excavation gave way and 150 linear feet of wall went down. No way would we have survived that collapse. And good thing we moved those tools or they’d have been gone.

What’s the old cliche, the middle of the word life is “if”. No guarantees. Enjoy it while we can. If you had to worry about getting alligator bit, you’d never paddle the Everglades. If you get in a little skinny kayak, you can’t be very afraid of danger.

What’s the old cliche, the middle of the word life is “if”.

This Was My Life - Megadeth, Countdown To Extinction

It’s odd how many pleasurable activities involve risk, yet we cringe at the close calls.

Compared to paddling trips, fitness routines are not dangerous at all.

I’m with Willowleaf here: Winter hiking is the best winter fitness routine, in my opinion. After I quit snow making (exercise enough for most) but before hip replacement I used to do little 3 mi hikes at a state park near me. Usually did that two or three times a week over the winter. They weren’t long but about 300’ up and down. Not much by the standards of many here, but its what’s available. (They were made by CCC crews - heck of a place to mix cement and haul water to set steps, eh? They did a job of work there, for sure.)
There weren’t any bridges to fall, though I suppose rock fall was a possibility, though I’ve never seen fresh signs of that or heard of anyone being injured in one there.

But there were some obvious predictable hazards even though I mostly stayed on trail. Doesn’t take much ice on the rocks to make it interesting. Here are some shots from several different hikes where I bothered to take photos:
the nature of portions of the trail on assent and decent: 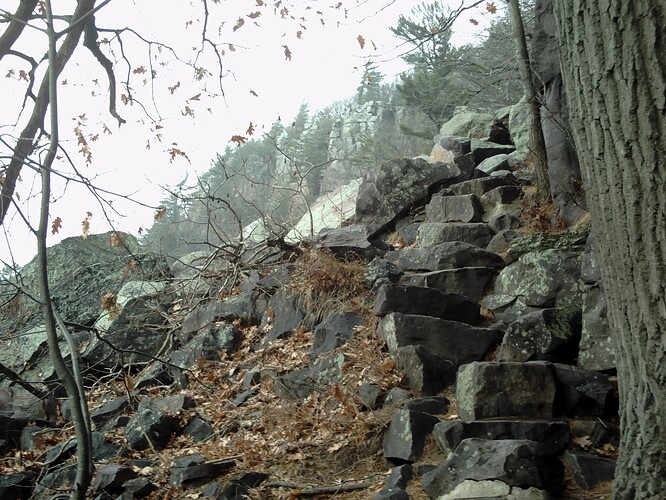 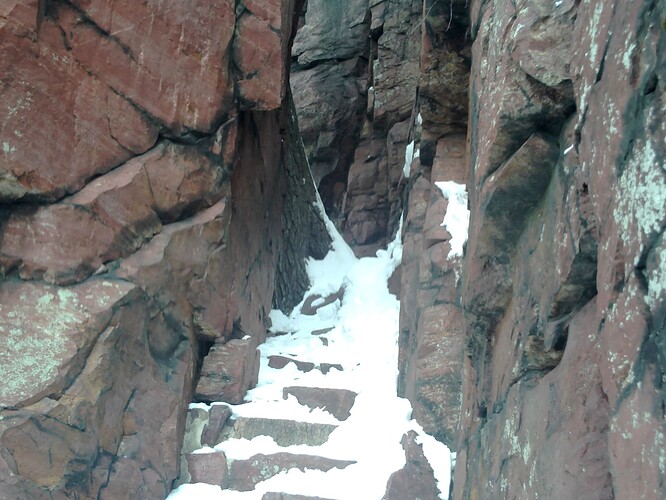 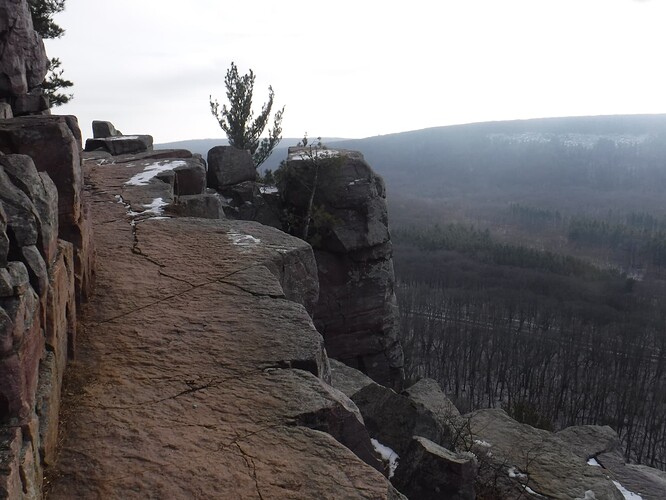 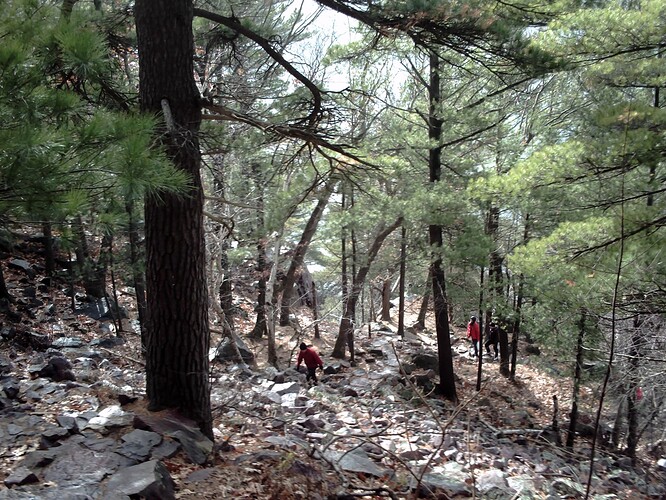 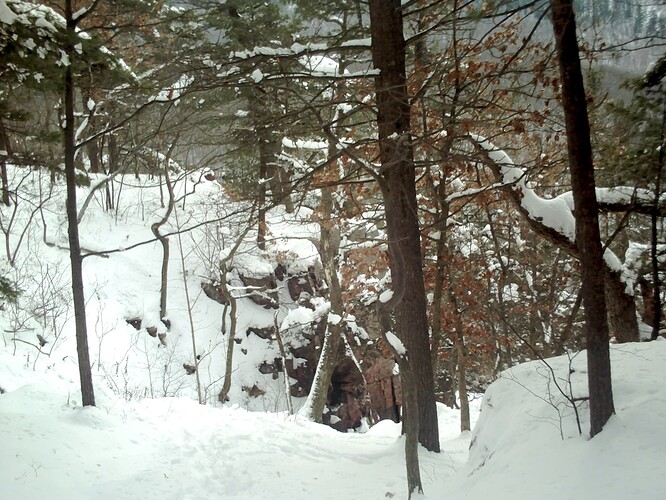 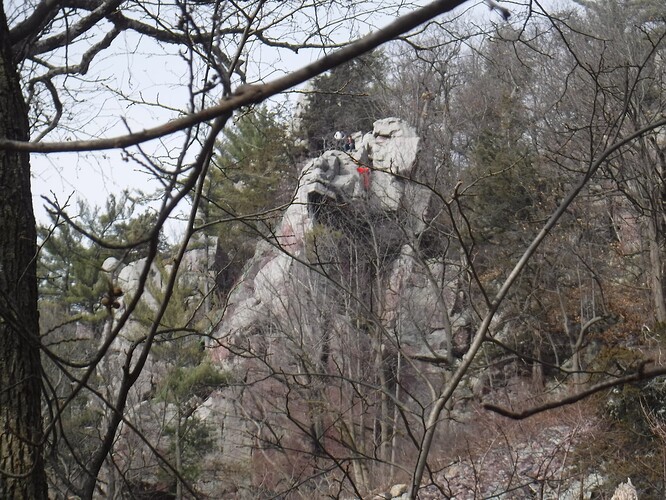 Well, I don’t trust my joints enough to go back to that quiet yet - but I’ll be back. Bet when I do I’ll be the oldest guy up there in the off-season.

Till then I got a $50 used airdyne bike that I use. Damn, its boring and completely safe…