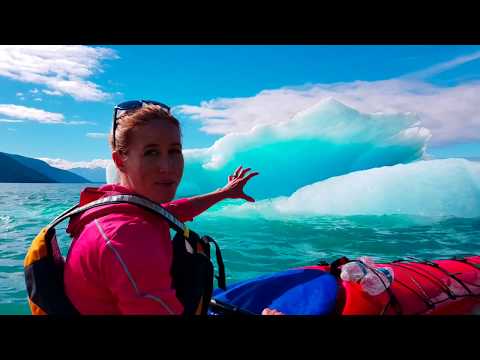 Unprepared for a dip?

Nice video in any case .

Sure as shit looks it. Loose PFD, skirt not attached to coaming most of the video, paddling into the ice flow while more is actively breaking off the glacier.

yikes… And I have paddled near glaciers but not that near… and never next to a berg no matter how small.

She would definitely be in for a rough time if she ended up in the water. Beautiful spot though. I’m envious of anyone that gets to travel to Alaska. I have wanted to go there since I was a kid.

I think this is an example of poor prioritization of filming a video taking precedence over good safety practices. I’m going to guess she had her spray deck undone because she wanted access to her camera or something else in the cockpit. It’s easy to fool yourself into thinking that you can pop your deck on quickly when needed, or secure your pfd while in the water after taking a swim.

Sure, let’s paddle among the ice flows closer to the calving glacier. Let alone everything else that folks have mentioned. She sure hates having her skirt secured…

Appears her companions had better sense. At least her paddle was not upside down.

Paddling in Alaska is very unforgiving.

That water has to be in the 40’s and the cold is probably transferring right through the hull, so she is likely already cold. Odds are that even if she can roll in warm weather, the shock of the cold water and the PFD up in her face will negatively impact that. She would only last about 2 minutes in the water.

If nature decides to mess with you we are all unprepared. We still try hard not to be caught in an unguarded moment, but she looks less prepared than she should be.

Maybe she is very good at it, but it doesn’t look it. The PFD is loose because it doesn’t fit right, it is too long and gets in the way.

You also should be paying attention to what you are getting into, rather than getting likes for your corpse.

Just a guess, but I bet she is being photographed from a more substantial craft with help immediately available.
She is not trying to demo cold water safety.

With any luck, she may see comments from the forum and figure it out, before she becames a news story about a kayaker recovered after a 5 hour search. Live and learn, or is it learn and live.

Even worse. From what I see on You Tube she is an Olympic Rowing champ from Britain. I’m guessing that was rental gear they were paddling in Alaska, so maybe she is not 100% to blame. In the video she says that they are also loaded up with camping gear. Wonder who the outfitter was?

I won’t rent a car with no brakes.

If you follow the video all the way through, at one point you’ll see the camera guy is in similar lime green kayak. As mentioned already, I’m guessing those are rented boats/gear.

Also for those that missed it the video is dated 2017 so if the conditions and her level of preparedness got the better of her I think it’d be old news by now (or at least something that’d come up if you Google searched her).

It doesn’t matter so much whether she got away with it herself. More of a problem is that others may believe what she did it is wise.

And there are some definite group command things going on here. She, with the camera guy happily filming it for her, was paddling towards problems while she was clearly being told to turn around by at least one other person in the group. Perhaps a guide who did have their head straight but had the misfortune to get her as a client.

Clients can get away from a guide. My husband and I were sitting off of Black Island one time sorting out how much extra shoreline of islands we needed to track to get home safe from returning lobster boats etc because an utter pea soup fog had come in. Which is just something that can happen, and in Maine it’ll come in over a mile in as little as 12 minutes.

But as we were deciding on our route, two people in tshirts and bathing suits come at us out of the very thick fog saying hi and isn’t this great. A mile plus out from anywhere on the mainland they could possibly have launched from.

Turns out they were with an outfitter who had parked his charges on the bigger camp site on Black for the night - possibly aborted other plans due to the fog. But these two had acted on their democratic rights and taken the boats out again to paddle in the pea soup.

We made sure that we got them back to the camp site and went on in. But while they should not have been where they were, it is likely the guide told them not to do it.

Yeah, I get what you’re saying, and I don’t disagree. Wasn’t trying to imply it was ok because they got away with it here. I was addressing comments like jyak’s saying she might wind up a news story for this. Which for good or ill it doesn’t seem she did.