Upgraded to a New (to me) Kayak

I finally found a boat after nearly a year of searching. I had pretty much given up finding something that I would like/could use. Even considered another SOT that was longer. I shopped primarily Craigslist over the last year. The big outfitter stores had nothing in stock for new-new kayaks, nothing was shipping mail order. Plus prices for new-new were really way out of my comfort zone.

Here is the thread where I previously discussed getting a different kayak to replace my old SunDolphin Journey 12 ft.

I’m currently shopping to upgrade my current kayak. It is an older 12 ft Sundolphin that is a SOT but the seat area is recessed into the mold so it’s more like a sit inside without the deck. It is a great little kayak and it is faster than my previous one (11 ft Emotion SOT) but I do a 1.5 hour commute 2x a week and would like the new kayak to cut some of that time if possible. It is used exclusively on a flat water lake, no current, some wind, and waves from passing boats. There are occasional …

So, last Saturday I was taking a break at work and realized it had been awhile since I had checked Craigslist for what kayaks were available. I didn’t think much of it, given that most boats were too expensive or did not have a large enough weight capacity. I was shocked to find a Wilderness Systems Tsunami 14.5 ft posted 6 days before. It was a good price and the pictures were great. It also had a weight capacity of 350 lbs, and the reviews online and the youtube videos all claimed this boat was made for larger paddlers and it was a combination of touring and recreational boats, that it was really stable in the water but was also quite fast, too.

I emailed the seller thinking surely the boat was long gone, but then he got back to me that afternoon stating it was still for sale. I sent with my email a list of questions and all of his answers were perfect. He was asking about $100-$200 under what others were asking in other parts of the country for the same boat. The boat was a 2 hour drive away from me, but it was not in a big city (I hate city driving) so I made arrangements with the seller to come look at it on Monday. I drove up and looked it over. It was great. No holes or cracks. There were some usual wear: the seat would not raise from pulling on the rope level under the seat, you have to do it by hand. Also the skirt that came with it he admitted he’d never been able to get it on the boat. I later discovered that it’s too small for the cockpit. No problem. Quick fix on Amazon will solve this.

I ended up buying the boat and brought it home. Put it in the water the next day and did the normal trip out to my property on the lake. It performed flawlessly. Better than I could ever have expected. I came back today after having figured out how the rudder works with the foot pedals. It was such a huge difference, not having to think about turning with my paddle but just a slight touch of one foot or the other did the trick. When I got the pedals lined up correctly I first thought there was no way it would work, that my legs were too long. But once I got in and got my feet on the pedals it felt very comfortable. I seen several people online say the rudder is not for steering but for keeping the boat straight against crosswinds, but I really don’t know why that is. It really makes paddling much more enjoyable steering with the rudder.

There was quite a bit of wind today on the lake when I came back (I was a little nervous) but it took it with no problems at all. It was incredibly stable, not even a hint of being tippy. I was even able to use the new “special” dock they put in at the county ramp for Kayaks, which means I no longer have to share the regular launch dock with all the other boaters and no more trying to keep the boat steady while I climb out. Plus, I don’t think I’ve ever actually seen anyone else use the kayak dock before so I have it pretty much to myself.

As for speed, I cut 30 minutes off my trip each way. I think this will probably increase to 40 or 50 minutes since I was paddling into the wind today and I’m still figuring out how the boat handles.

I was also a little worried that I would have issues transporting a larger boat on my car. But, it actually rides on top like a dream. No issues at all.

The only thing I really can’t do with it is haul lumber. But once I’m finished building I doubt I will have much need for this anyway and I can always rent a boat from the marina in town to do this.

Overall, it has turned out to be a great boat. Well worth the money and I’m so glad I found one and decided to take the risk. Once I get a properly fitting skirt I will now be able keep my weekly schedule at my property rather than cut my stay short because of predicted rain (like I had to this trip).

Here’s a stock photo of the boat: 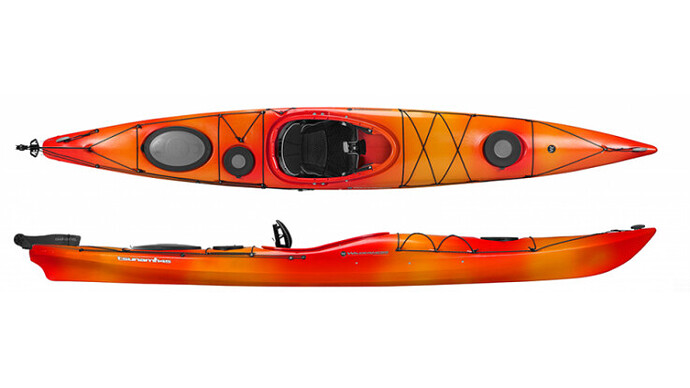 Congratulations on the new boat. The WS Tsunami is a quite capable line.

The reason for saying that about the rudder is that edging a sit inside tends to be easier than with a SOT. Edging being the primary way to turn a boat in messier stuff, if for no other reason than that in waves a rudder will not always be in the water.

If you encounter enough wind or current against the side of your boat, it can push the hull around and make the angle you have to hold with the rudder steeper. Edging increases the ability of a boat hull to resist that push.

That said, it appears that your paddling avoids much of this. But that is why you have heard this.

Congratulations on the new boat!

Spot on assessment Celia. I have a Tsunami 165, and I only use the rudder for assistance when dealing with higher winds and strong cross currents, and rely on edging for turns and in waves. In fact, I can often turn my Tsunami tighter with edging and sweep strokes than I can with the rudder, and when on the ocean the stern often comes out of the water when going over swells.

@why1942, Enjoy your Tsunami! You’re going to have a lot of fun with it

@NHTrucker - It’s been an impressive boat so far. I’ve even made up some excuses to justify going back out tomorrow morning before the rain hits again.