Useful as Training Video - What Not To Do

Interesting video of family kayaking river trip that is filled with numerous examples of bad judgement and poor decisions. Note the video is very long. 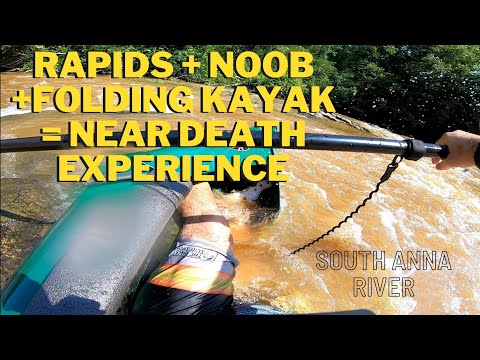 After a lot of rain, above normal flow?

He should have bought a lottery ticket that day!

It is sad but also quite typical of what I see around here all summer.

He was shook up and at the end of the video if he were to show some remorse or say he was going to look into a safety course for them to take or something other than planning their next adventure I would have felt better. I even read the comments on you-tube and most people that commented were of a similar mindset.

I watched the whole thing and what bugged me most was the clips attempting humor he added. If he would have cut to boaters safety video that explained the right way and pointing out the many mistakes it could have been a good video.

Gear not secured. Phone in pocket, Go Pro on tripod, Fishing gear also appears to be unsecured.
Bucket and water were certainly were not secured.

Rookie paddler goes her own way, he can’t catch up; no prior planning for any incidents that may occur.

River was not scouted; rookie error in not doing so.

Reminded me of a Keystone Kops cartoon…
I didn’t see much humor at all, and his verbal attempts failed miserably. Rapid breathing told the real truth; he was totally out of his element, and terrified much of the time. I seriousy doubt he will retain anything of value from the exerience.
Will he take an Intro to Paddling class? Nope!

Watercraft used is a piece of garbage.

I watched the whole thing when it was first put up and everything rnsparky listed was right on.

Right off the bat when he says the river was “high but not dangerously so” and the first shot is putting the “kayak” into water the color of chocolate milk… almost any earthling who has looked at water from time to time would have taken that color as at least a yellow warning light. Wouldn’t hurt to have, before launching, mentioned to the daughter that they should stay in sight of each other - but that’s been mentioned. If ever there was a pair that was likely to need a PFD, it was these two.
The guy couldn’t steer at all and didn’t seem to know what to steer toward if he could have. (And were those rudders attached to anything that might have made them usable as steering device? If so, I missed it… they looked like they were just flapping in the breeze) But this is stuff we all see and there’s no need to dwell at length on the obvious.

I was trying to think of any positive thing to say about this. (Its a sort of challenge, no?)

You know, it was pretty well filmed. Even when he hit the rock and was clearing the boat, he got a pretty fair record of it. In his shoes I think I’d have gotten nothing on camera until the boat situation was under control - but it looked like he never let up on the camera work even as he was trying to straighten his mess out…
I wonder if he’d spent about half as much effort in handling his “boat” (such as it was) as he did in the film making, some of that inept paddling could have been mitigated a bit. Its hard to be optimistic about the future unless the apparent focus of attention is directed to the water and the paddling first. Filming comes second.
I wonder if those two will ever paddle again. And if so, is that a good thing?

Beats me why anyone would film stuff like the let alone post it for the world to see. But then I’m somewhat anti-social & don’t think that very many give a flying … about what I do Nor should they.

I did have the pleasure of meeting one of those crafts in the plastic this Saturday. Oru kayaks are fairly decent for what they do But these things are not good for much. Owner struggled to get back to the launch against almost unnoticeable current. The flappy thing at the back is more of a skeg than a rudder.

Oh, yeah I couldn’t see any class II and not much that I’d call class I. Definitely some hazards at that water level though. Ah well …

I was trying to think of any positive thing to say about this. (Its a sort of challenge, no?)

He did have a bilge pump with him…

And you have give the guy credit for just wanting to go out and paddle with his daughter, maybe make a family film of it. Seems like a nice enough fellow and they did get to the landing about when they planned. They were sober. They didn’t get in any arguments. They didn’t leave a trail of trash. Yes, that was a nice bilge pump. They weren’t trying it in winter. As far as I could see the daughter did OK. As bad a show as it may have been, we’ve all seen as bad or worse and not uncommonly, I’d guess.
Still, this really could have gone badly - well, I guess I should say much worse - it went badly enough. Luck was riding with them.

It would have been sooo much better if the water was a bit lower and if someone was along who knew a bit about what they were doing. It wouldn’t take a class V river runner or a certified BCA instructor. Just someone with some extra PFDs, a rec yak they could control, and enough authority to keep them in sight of each other. And, true enough, maybe point out what a hole and a class 2 rapid isn’t.

We were all beginners, too. We’ve all gotten stuck. We’ve all brushed through some overhanging branches, even intentionally if that’s where the water was better.

Through the whole thing I felt nervous for them, yet here’s a short of a bunch of folks making many of the same errors, and I don’t fear much for these guys. Why not? A little bit of experience and some familiarity with water goes a long ways, I’m thinking. 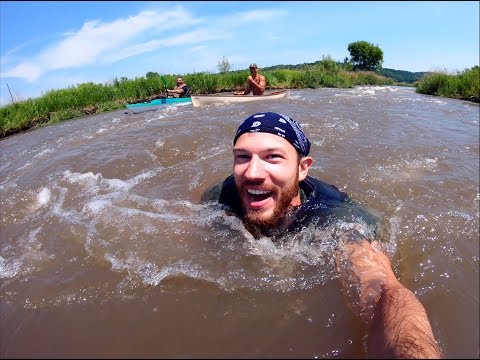 Beginners should stick to lower flows. The river was forgiving because it did not have much gradient. They got away with their mistakes. This brings up the important point that people need to make careful decisions about what they lead other people into.

If you care to see more misadventures of this guy and his daughter and her many colors of hair they have more here. There is an equally good one on how not to fish from a folding kayak and one on how not to start a fire with a survival bracelet and much more.

Thanks, but no thanks.

I have many colors of hair. Red, brown, silver, gray, and none. All courtesy of Ma Nature.
A father/daughter relationship like theirs appears to be is great!

They do seem to have a great relationship I see one of the videos is the daughters 20th B-Day video so she is a bit older than I first thought.

Lets hope they don’t have to learn of safety the hard way. They are both adults and for me it’s still a free country so if they don’t carry a PFD in those boats held together with a plastic clip it is their choice.

My hair turned several colors before left for good. None were blue or pink though. Not that I have anything against blue or pink hair That also fall under it is a free country.

At a fairly advanced age, my wife’s hair is still beautiful, in it’s natural state. Good genes I guess. I have known a couple other women who have theirs colored every month. Doesn’t look healthy to me.