For many years I loaded my fishing kayaks on the roof of my SUV by laying a towel over its rear wind deflector, lifting the bow of the kayak onto the towel, sliding the kayak forward onto my padded roof rack, flipping the kayak over onto its gunwales, and strapping it down. This was quick and easy, and the only gear involved was a $3.50 discount store towel. I always parked my vehicle on a flat spot before loading my kayaks, so I never had a kayak slide sideways off my wind deflector when loading it.

However, I bought a new SUV, and it had a thin and flexible rear wind deflector with a thin red light on its rear edge. Because I can’t clean and jerk a 13 foot long kayak, I had to find another way to get my fishing kayaks onto the new vehicle. I first bought a kayak loader which slid out of the end of one of the bars of my roof rack, but it was too flexible and felt very precarious. I was looking at various loading devices which mount in a tow hitch, but they cost a lot, and would rock and swing around on the back of my vehicle unless I removed them from the hitch and put them inside the vehicle when traveling, which would be a big hassle.

So I have been loading my kayaks onto the side of my SUV using a towel, which is almost as convenient as loading them on the rear, and there is no risk that the kayak will slide off sideways if my vehicle isn’t parked on a flat spot, because the roof rack keeps the kayak in place.

First, I lay a towel over the side of my vehicle, and put my kayak on the ground next to the vehicle with the stern lined up with the towel. 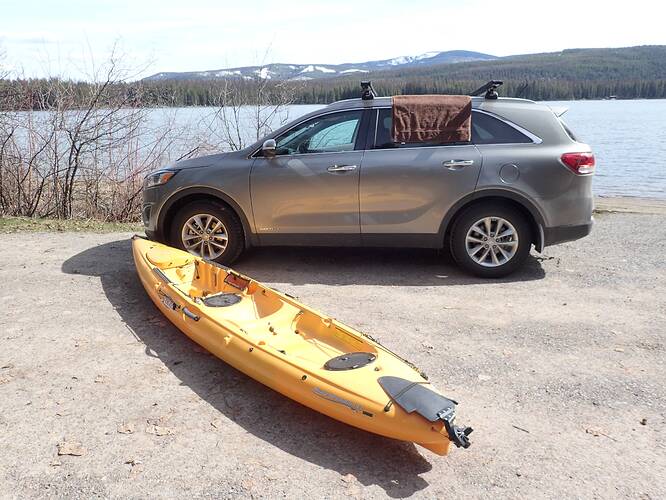 Then I lift the bow of my kayak onto my shoulder, walk it over to the side of my vehicle, and set it on the towel, with a foot or so of bow above the towel so if the stern slides on the ground, the kayak won’t fall off the vehicle. 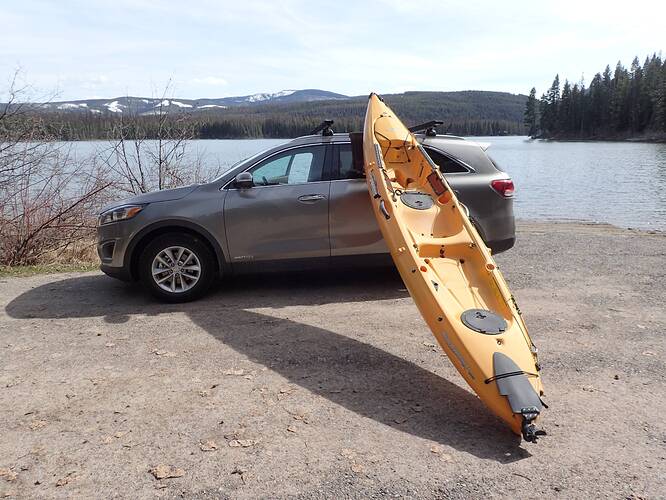 Then I pick up the stern of the kayak, slide the kayak forward on the towel, walk the stern around to the back of my vehicle, and lay the kayak on its bottom on the roof rack. 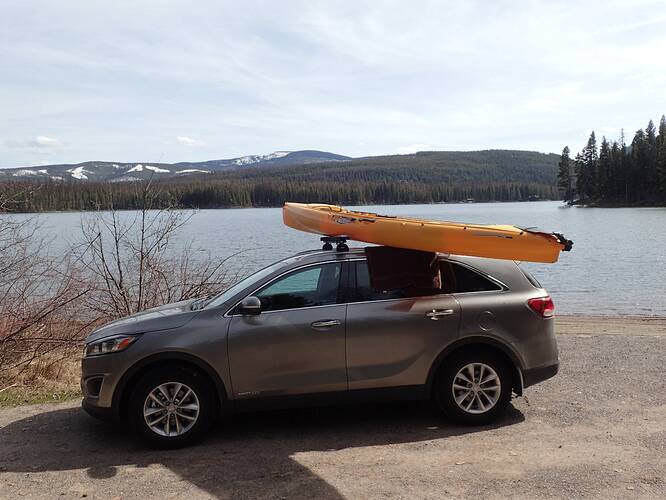 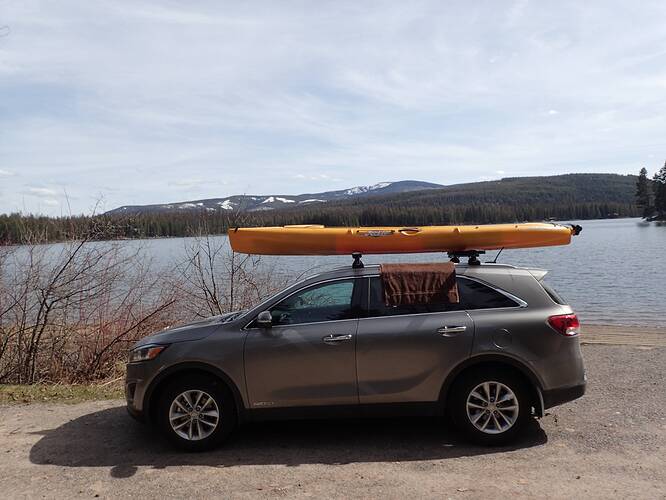 Then I stand on the threshold of one of the passenger doors, flip the kayak over onto its gunwales, and strap it down. 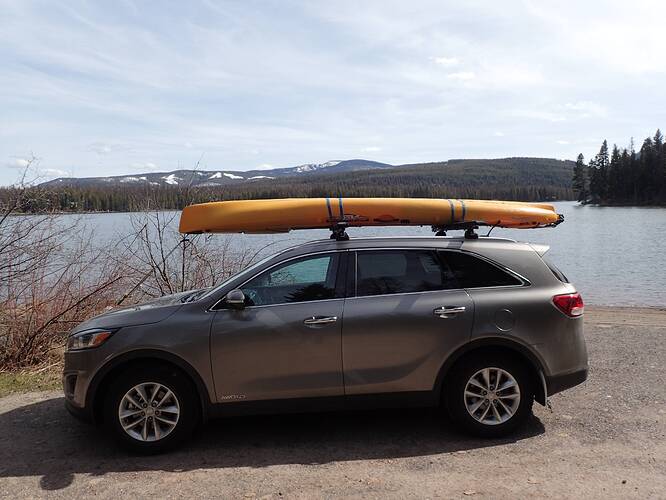 I already had a towel. A problem with using a towel to load a kayak on your vehicle is that if it’s windy, the towel can blow off your vehicle before you can lift your kayak onto it. One option is to lay something heavy on the towel to hold it in place. My vehicle has a couple of holes in the sides of the rails on its roof to hold the factory rack in place. I invested a couple more bucks in a bungie cord, shortened the ends of its hooks so they would go into the holes, and use it to hold the towel down. I leave the bungie cord in place for a weekend of kayak fishing. 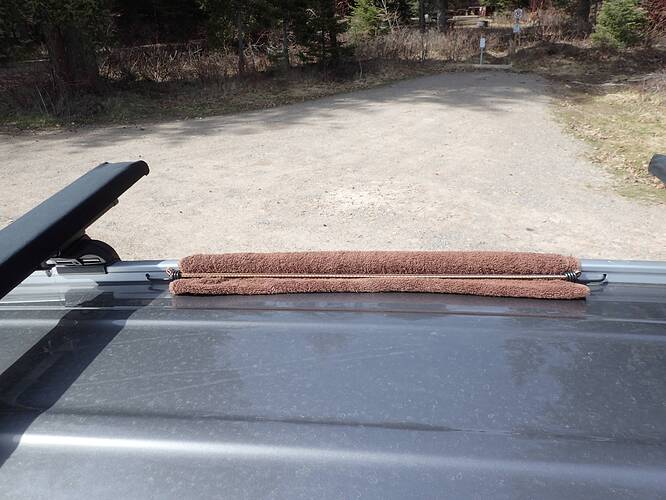 This is an easy, cheap, and secure way to get a big kayak on top of your vehicle.

Folks who know me here are aware that I like to point out easy ways of loading boats that a lot of people don’t tend to automatically think of on their own. One method I’ve been using for 40 years is very much like what you describe, but the boat is leaned against a lengthwise bar running along the edge of the car, attached to the two cross bars. This, of course, eliminates any need for putting padding on the vehicle, but the principle is the same as what you describe.

You are right that when the vehicle is parked sideways on a slope, especially a really steep slope, sliding a boat up from the rear can be problematic (without further rack modification, which of course might be a good option if you find yourself in the situation a lot). When parked on such a slope, loading from one side is the perfect solution.

Put some cradles on the bars and you won’t have to flip it over. Hobie sit on tops have plenty of drain holes.

Cradles have their plusses, but for that boat, I can’t see how any method could be better than upside-down, resting on those nice, strong, flat upper edges that have nothing to do with how the boat moves in the water. Everyone has seen plenty of plastic boats with deep dents where non-bulkhead-reinforced hull surfaces rest in cradles. Cradles aren’t perfect for every boat, and I think in this case, putting it upside-down with those ridge-shaped (therefore very strong) upper edges against those wide, flat cross bars probably is perfect.

Deep dents and over tightening of ratchet straps have ruined many a hull.

Perhaps correct on the upside down since it has gunwales somewhat like a canoe.

I use a bath mat - a bit heavier, and the rubber mat keeps it from slipping.

@rosborn45 said:
I use a bath mat - a bit heavier, and the rubber mat keeps it from slipping.

I have seen a video of a guy who uses a pillow instead of the towel. I have been thinking of using some kind of cushion with straps in two corners that I can connect temporarily where my crossbars meet my rails and load the same way. I am really surprised someone has not invented a padded brace that latches on the crossbars and sits parallel to the rail, between the crossbars, a few inches from the car.

Since I paddle canoes again I no longer load from the side, I load from the rear. When I paddled kayaks, I used foam mats, rugs, and the cars floor mats when I’ve not had anything to load the way you illustrated. Good tip and you did a great job illustrating your tip too!

I always load my kayaks and canoes from the side, but I have a relatively low roof on my station wagon and my load bars are 72" wide and stick out the same width as my side view mirrors, so, depending on which boat it is, I can either put one end or both ends on the rack at the same time by just raising it up a bit and sliding it off of my shoulders.

This approach doesn’t work quite as easily with taller vehicles or shorter cross bars.

I use pool noodles–The cheaper and more colorful from a Dollar Store, the better. I cut a lengthwise slash down one side (fits on a straight rack like insulation wrapped around home plumbing.) Vive la difference! With an extra free noodle, sometimes I load from the rear, sometimes work up the side. The cushy foam paddling of the noodle absorbs nicely without any scratches. Attach them with clear cable ties. When the noodles wear down, I snip them off and put on new ones. (Of course, I also snip them off if I have to go to any formal functions where there’s valet parking;-)