I have moved to SW Florida. The paddling opportunities here are endless, and the possibility of getting lost are also endless. I have found that cell phone coverage drops off pretty quickly and maps and charts change rapidly in mangrove estuaries and rivers.
I have been looking at some smart watches that use GPS satellite info only for navigation. I am not super tech savvy.
I would love a watch that used satilite imagery and gps for navigation, not relying on cell service. This tech is evolving so rapidly I do not know anybody or place where I can actually see an operable system to see if it would be relevant to Florida water navigation.
Does anybody have any suggestions or experience?

Not a watch but I use a waterproof phone (w/ no cell or data plan) for nav. I installed OsmAnd w/ offline maps. It has map styles that can be changed up so I use a nautical base map and choose the POIs to show marinas, slipways, etc.
It uses GPS and follows my track really well. Gives me a bunch of stats as well when recording and after saving a track.

I find a dedicated GPS to be best for navigation. Many are waterproof, they don’t rely on spotty cell coverage, and most have periodic free map updates. There are a wide range of maps and charts that can be used. The more basic GPSs are not that expensive in the general scheme of things and can last for many years. I still have a Garmin III+ that is 23 years old, although I have newer models as a primary GPS. Although I was given an early model Garmin watch that I use for hiking to save tracks, measure distance, etc., I don’t think I would want to rely on a tiny watch face for navigation.

I recommend always having a printed map or chart along with a compass and knowing how to use them. The are not likely to die in the middle of a trip.

My iPhone is water resistant and I have a sealed case for it. The normal map program set to satellite image will need cell coverage to update, but it can be forced to store the data and then just respond to the GPS location without cell coverage. I had it doing that at one time a few phones ago when I was using it on my bike storing maps by looking at them ahead of time. I then found some apps that did it much better and there was no chance of uploading and losing what I had. That was 5-6 years ago I’m sure there is something better by now. Check out the app store.

I don’t get into areas where I really need the features now but have used it a couple times to try and figure out how far we had to go to take out etc.

I often sit at the computer ahead of time and look over a route and try and get a feeling for finding new put in or take out spots.

I have found that most charts are all but useless in mangrove estuaries, and meandering rivers in the area. Satilite imagery is frequently updated here in SW Florida and seems to be reliable.
I am looking for a system that I do not have to use the breadcrumb style gps tracking and would allow for a little free roaming, and allow me to track my own way. (I can navigate via charts and plot locations).
I like the idea of the training style watches as I also like to snorkel, and a salt water resistant navigation tool would be perfect. Like I said in the OP, the technology is changing rapidly, with little or no real life user advise for a paddler that likes to wander.

I used recent Google Earth maps and a couple of Garmin dedicated GPS units to navigate the Yukon River races. I made GPS waypoints at each critical turn point and island avoidance point and stored the resulting pesumed fastest paddle route in my GPS along with a set of waterproofed printed maps that I carried with me.

When a friend was preparing for the race around Florida, including through the Everglades (WaterTribeTM Ultimate Florida Challenge) I prepared the same sort of thing for him. 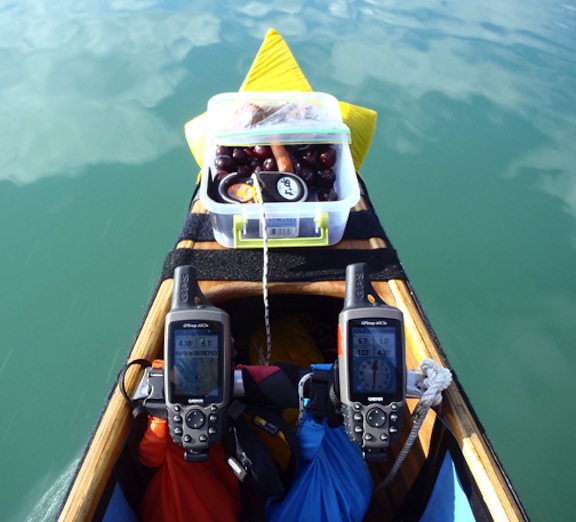 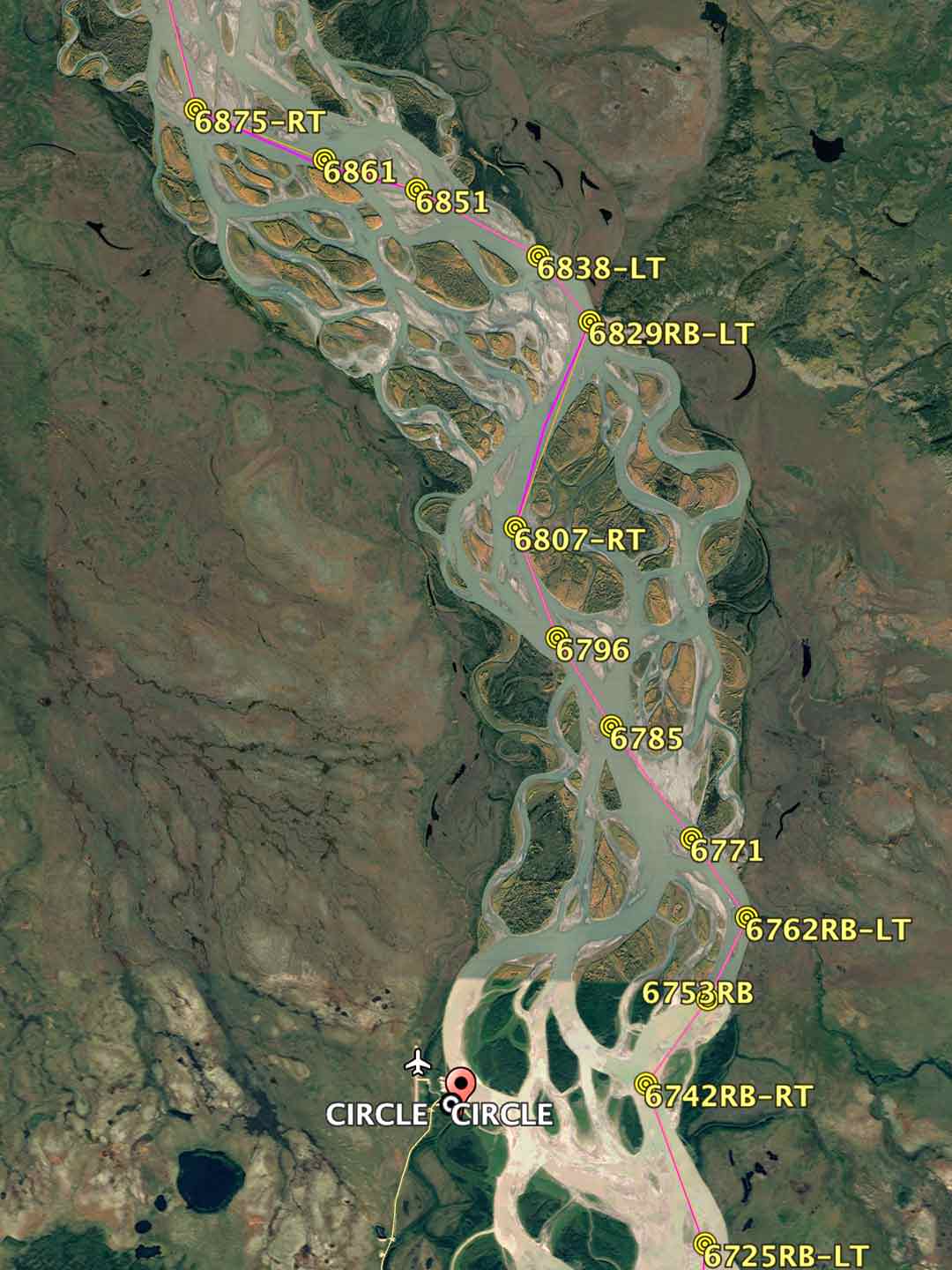 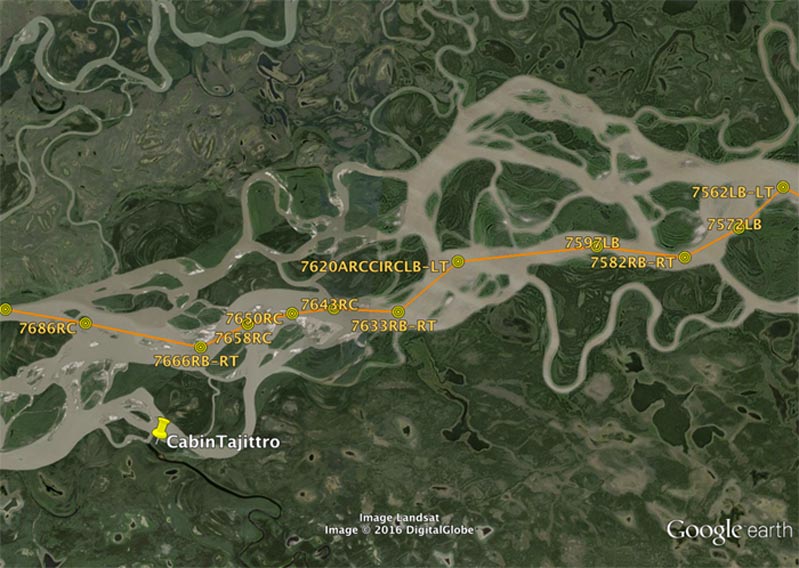 Cherries for the win…

In areas where navigation is tricky I’ll often compare a Google Earth printout to a a printout of a map that my GPS is using to look for any differences. Comparing the GPS screen to the two printouts will generally show me exactly where I am. Just have to check the Google Earth date, but they seem to update it rather frequently. The same could be done with other satellite printouts.

Most GPSs also have a trackback feature that you can use to retrace your exact path if you have to. This will ignore changes in the actual topography.

I’ve used Google Maps on my android phone but offline it will not show satellite views. Experimented with it using airplane mode and found that 1) GPS tracking works fine, and 2) if you zoom to an area while connected to the internet then it shows you the same level of detail months later even when offline. Recent Galaxy models are waterproof to IP68.

have found that most charts are all but useless in mangrove estuaries, and meandering rivers in the area. Satilite imagery is frequently updated here in SW Florida and seems to be reliable.

Depends upon the amount of cover. Like trees…often the smaller creeks get difficult to see the channel on sat nav.

I use a Garmin G78C. It has a get go me feature. Press button and it directs you home. Never used it.

As a point of record mangroves can be the easiest place to get lost.

I have a Galaxy S20+5G. The rating of IP68 is considered water resistant, not necessarily water proof or submersible. The warranty specifically does not cover water damage. If the phone is flooded, Samsung considers the phone has been abused. Count on the claim of submersion in up to 1.5 meters of freshwater for up to 30 minutes at your own risk.

There are a number of complaints online that Samsung under no circumstances will provide warranty coverage for water damage.

I used to be a chart and compass purist. No need for GPS… nah thats for sissies
Then I started doing a LOT of paddling in the Everglades. Piloting is a wonderful skill but when there are too many islands that look alike or… too many mangroves that look a like ; you get to appreciate a GPS…
Now mangroves are fun. Mostly. Unless they are tunnels that are choked up necessitating reverse strokes for a few hundred yards. Met one a couple of weeks ago.
I suggest avoiding touchscreen anything. I can take my Oregon and just by bumping it it sends me to la la land. I prefer buttons and a readable screen… After 10 years I can’t read my screen anymore.

I am currently exploring the Peace, Myakka and Shell creek, over half of it has no cellular coverage and my Samsung S21 has very poor GPS accuracy once out of tower range. So I am trying to go to a stand alone GPS. Most of these are set up with road maps for runners and bikes and topographic for hikers, none are particularly helpful. Even water current is not easy to read with tidal influence and slow flow. In 30+ years of paddling and navigation I have never been “lost” as much as I have been here.
I can get back to launch points with my compass, but cannot reliably find areas to return to after finding cool stuff. Hence my looking for accurate navigation.

I used to be a chart and compass purist. No need for GPS

That’s me, the way I have always been and am still today. No cell phone maps either. Except when I am canoe racing or training, I rely on a gps for target speed monitoring on familiar routes. Or when on a new to me route and especially when on a complex river route, such as the Yukon, I use GPS waypoint planned routing for efficiency and speed monitoring. As a SAR crew leader it is necessary to use GPS (always plus M&C) during SAR incidents. But when backcountry navigating on foot, i am a very much old school traditional M&C uer and visual navigatior esclusively, and I also teach my classes the same way.

I accidentally tested my S9 on a river bottom 2.5 feet down for a couple of hours. I was impressed but YMMV.

One problem with sat images is cloud cover . And of course tree cover. If I had navigated the last trip through Halfway Creek loop with a sat image I would have struck out… Mangrove tunnels obscure water path.
Another good use for GPS is in the fog off the Maine Coast… You can rely on a safety bearing and of course have a compass and get by and stay oriented sort of( fog is mentally disorienting by itself)… You will get to land eventually. How eventually depends on tidal drift. A GPS is helpful in calculating of how strong a tidal current you are in. Coming back from Isla Au Haut in pea soup prior to GPS we were grateful for Nun 2… Showed up on the chart. There were however two Nun 2 s… Which one were we at?

Gaia gps is a program/app (paid or free version) which you can download maps (sat. included) and use without a cell signal on your smartphone. If an apple user it will interface with a apple watch. Not sure about how it works with maps transferring to the watch, but you could check them out.

Luc Mehl has some excellent resources on using Gaia and Google Earth to do route planning. He happens to be a hiker, skier, pack rafter. Several great videos under the Trip Planning tab of the website. I’ve used them for hiking and they work exactly as described. The best I can tell they’d work fine on the water provided you start with a map of sufficient detail.