I purchased a vintage kayak at a garage sale but don’t know the brand or manufacturer. Am giving this as a gift and need to figure out what kind of skirt spray and seat. Would appreciate any help as I am very new to all of this. 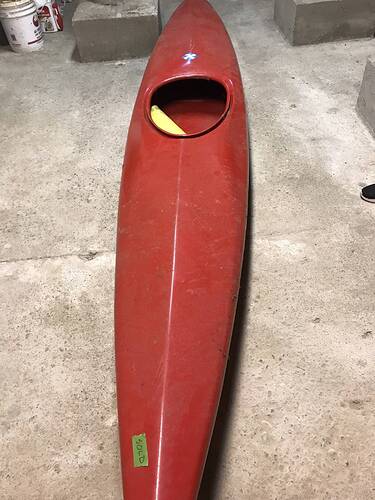 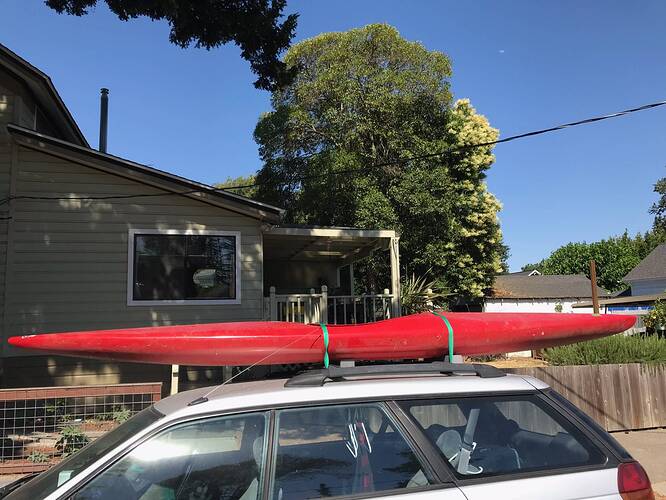 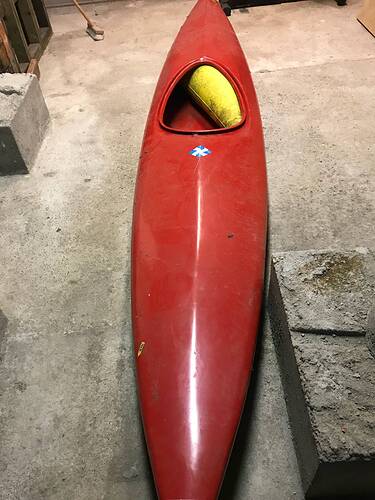 Might want to find out where they will be using that boat before you spend any money on it. It’s very specialized, I’m sure others can tell you more about the boat.

As stated that boat is designed for a very specific use. It is not meant at all for flat water.
It also looks like it needs (or maybe has) interior flotation.

It looks to me as if it is most likely an old, fiberglass 4 meter whitewater slalom K1. Now the minimum length for Olympic K1 slalom is 3.5 meters, but at the vintage of which that boat appears to belong, it was 4 meters. Measure its overall length. If it is 13 feet plus an inch and a half or so, it is a 4 meter boat. Although boats of that type were designed for whitewater slalom and might not be quite as efficient as a dedicated sea kayak, it would not be a slug on flat water.

You may have difficulty finding a ready-made skirt to fit that boat and may need to either make one for it or have one custom made. A word of caution, though. The cockpit coaming of that boat, and many composite kayaks of that era, has a sharp edge unlike the thick, rounded edge of modern rotomolded polyethylene kayaks. A skirt with a rubber rand will not easily seal or release from that cockpit coaming. You will want a shock-corded skirt for that boat.

To make it usable, you will likely also need to add some type of seat or seat pad and possibly footpegs. If you want to roll it, you may need to fashion some type of thigh braces. As for seats, you can do quite a bit with a can of Weldwood contact cement, some minicell foam plank, a surface-forming tool or two, a bit of sandpaper, and some time, as the photo at the top of this webpage shows:

The ready-made “happy bottom pad” also shown on that page might work, but you might need to glue some minicell to the sides of the hull at the cockpit to correctly position the hip pads portion of the seat.

Looks like you have at least one flotation bag (the yellow thing) – it needs two, one in the bow and one in the stern. Otherwise it will fill with water and sink.

I used to have a homemade K1 slalom boat like that – my outdoor club had a mold and we would lay them up ourselves with fiberglass back in the 1970’s and 80’s. OK for moderate whitewater (class II or III) but not much else. Similar boats often come up for sale in my area, in FG or plastic, for $75 to $200 and unfortunately a lot of beginners buy them not knowing what they are. Really not great as a “starter” kayak.

One of the big problems is that they are easy to capsize and nearly impossible to get back in if the water is deeper than waist high. If you don’t know how to roll, you have to swim dragging the boat to shore and empty it out and then re-enter and relaunch. Tolerable in a shallow stream, not safe in a wide deep river or lake. Also rarely comfortable for long cruising outings. They don’t track straight and the lack of a lower back support gets tiring for some people. These are designed for short, fast twisty slalom courses.

It would definitely need foot pegs and some sort of seat. Sprayskirts are a problem on those old boats – you’d need stretchy neoprene with a corded bungee . As was mentioned above, the “rand” type whitewater skirts don’t hold on those narrow coaming lips.

Honestly, though you probably got a “great deal” on this yard sale prize, it is going to take more cost and effort to outfit than you probably realize and may still not be suitable for your intended “giftee”.

It would make a cool looking yard planter or ice bucket for parties, though…

Smorg -you say this is a present. Who for, someone who already knows how to paddle or a newbie who wants to take it out on lakes etc? As above, if the latter this boat may not be a fit.

To he person you’re gifting it to is your enemy?

I have a boat similar to this and use a 205cm paddle and a vertical stroke and keeping it straight isn’t too much of a burden and it’s faster than most people would expect on lakes - the only place that I’ve paddled it.

The big benefit is it’s less than 30 lbs.

The key for me to enjoy this boat is using a short paddle and vertical stroke.

Just curious, what are the primary and secondary stability characteristics of a boat this style? It looks like it would be very easy to roll, though the back deck could be lower.

Yes, they roll easily. That also means that you have to be conscious of your center of gravity in the boat and control it with pressure under the deck with your knees/thighs if you want to stay upright. If you relax and turn your head and upper body too quickly (“Hey, look over here!”) the kayak goes over. Stated from experience.

It certainly doesn’t look like a good gift for a beginner - unless they’re the sort that likes a challenge from the start.

Maybe it’s for a girlfriend or a boyfriend! Makes me think of the woman that pulled the plug on her man’s yak before they went out.

People in this thread seem to think a boat like this is some type of death trap. I suspect the great majority of those making such comments have never paddled one.

Yes, hulls that are derived from racing paddle craft most often have roundish bottoms because that reduces wetted surface area and maximizes speed. That and the fact that they tend to be fairly narrow makes them a bit tender. But it isn’t as if a paddler with reasonable skill cannot paddle a boat like this if it is properly fitted to them.

As willowleaf mentioned earlier, back in the 1970s and into the 1980s many whitewater kayakers built boats of this type in their basements and garages. Perception introduced roto-molded polyethylene kayaks in 1976. Prior to that time, the vast majority of whitewater kayakers paddled fiberglass K1s, many of which were home built.

And the designs available at that time were pretty much all 4 meter Olympic slalom kayaks. What typically happened is that someone cut an Olympic boat in half and fashioned a plug from it. Plugs made their way from one club to another, and clubs bounced female deck and hull molds from the plug. These were used by club members to build their boats. And some pretty challenging whitewater with many first descents were paddled in those boats.

@pblanc said:
People in this thread seem to think a boat like this is some type of death trap.

I’m not reading that from most of the comments, nor was that my own opinion.

That and the fact that they tend to be fairly narrow makes them a bit tender. But it isn’t as if a paddler with reasonable skill cannot paddle a boat like this if it is properly fitted to them.

This is one of the main points. The OP, by own admission, doesn’t know much about kayaks. We know nothing about the recipient of the generous but perhaps ill-considered gift.

I’m thinking back to before I bought my first yak. This lady tried to sell me this ancient egg shaped white water boat with a shoehorn fit. Very unstable for the inexperienced. I don’t think to highly of individuals who put someone in a boat that is not a good match for them.

Well, for a very inexperienced kayaker like myself, this has been an interesting, informative and funny thread. The person who is getting this is experienced. I appreciate the wisdom of those who are familiar with this type of craft and have offered helpful advice. Now I have research to do.

Measure the longest and widest outside dimensions of the coaming (cockpit lip) and then order one of these basic nylon sprayskirts from Backcountry. They have 11 different sizes starting at 38" x 20" and they are under $40. The nylon elasticized skirts work pretty well on those lips. They also have a few sizes on sale of a full neoprene skirt (second link) that might work – better if the intended kayak owner plans to do whitewater. Backcountry has an easy return policy. They can also help you through their online “chat” customer service if you find the dimensions of the coaming don’t match the sizes for these two models.

Make a tracing and you can have Seals or Snrpdragon make one to fit. Rim / flange looks small.

Smorg -you say this is a present. Where does this person paddle, quiet rivers, ponds, ocean etc. The gist of above is that the boat is not a good idea for all those environments.
As to experienced, not always a term that does a good job of describing the paddlers capabilities in a given environment. A very experienced paddler on smaller inland lakes can be over their head pretty fast half a mile offshore in the Great Lakes, or in class 2 rapids. That is why a lot of the above replies.