New to forum and have a quick question. I was given two vintage kayaks that look to be Prijon kayaks from tiny label I found on bow. They are fiberglass and in pretty good shape. From my online research I think they are older whitewater kayaks. They are 13’2" long. Brown on bottom and white on top. They are actually in pretty good shape. I am new to kayaking and was wondering if these would be any good for lakes? I don’t intend to do any whitewater kayaking. They could be spiffed up easily but don’t want to bother if they won’t be any good to me. 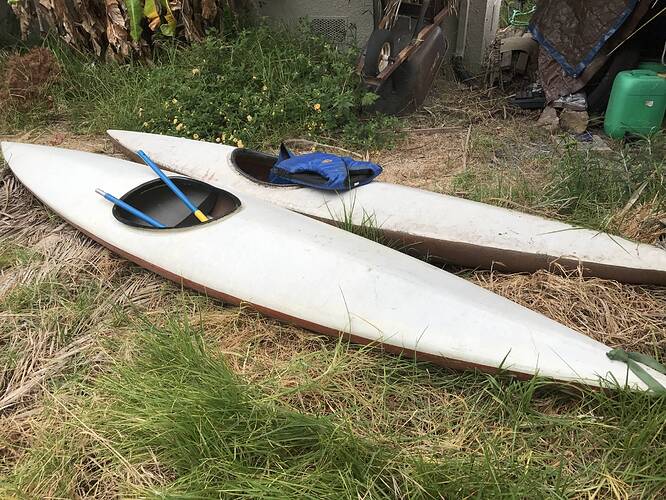 I don’t know anything about those particular kayaks, but should be able to determine pretty easily whether or not they’d be good for lakes. Just try them.

Boat design is all about compromises and typically whitewater kayaks have pronounced rocker (curvature of the hull along its length) which allows them to be very maneuverable but they don’t track (go in a straight line) very well. Boats for flatter water tend to have minimal rocker for the opposite reasons…

So, take a look at the hull along the length of the keel. If there’s a lot of curvature then they probably won’t be great boats for lakes. But, you really should try them!

Yes, they are “old school” whitewater boats – this style prevailed back in the 1970’s back when my outdoor club was doing a lot of whitewater and before the range of shorter planing style “playboats” took over the market. The 13’ long pointy flat style is based on what used to be the standard for Olympic slalom kayaking. We had molds to make our own like this out of fiberglass (I had one for a while). Prijon and Dagger made several models along these basic lines, early on in fiberglass and later in rotomold plastic.

They can be fun for moderate whitewater, coastal surf or poking around narrow twisty flatwater streams. But because they are designed to turn quickly to negotiate rapids they don’t track well and can be tiring and frustrating in wide rivers or lakes. Some people have trouble getting into the small cockpits too – I sold the one I had because I could no longer fit in it. I have known people who rigged skegs for them (a fixed in place “fin” under the stern keel to aid in tracking but that’s a bit of work. You also have to use inflatable flotation bags in the stern and bow – if not they will sink when swamped or capsized. The style also tends to be unstable and are easier to capsize in the first place. They are meant to be agile and easy to Eskimo roll.

I hope you did not pay more than $100 each for them. If you really want a kayak for lake paddling there are far better choices so you might want to consider selling them and putting the money towards something else.

not the best for learning how to paddle, but the right person could have plenty of fun and use on a lake.

I didn’t call them “useless”. Just pointed out that they are not the best candidates for the OP’s intended usage.