Warning for Fishermen in Kayaks

Go put on some chest waders without a belt on the top and climb in the pool and tell us how it goes.

Waders open at the top are kind of like a sea anchor or scales on a fish. They won’t suck you to the bottom but will allow easy movement in one direction and resist movement in the other direction. The direction they go easy when you are treading water is down the way they resist is up. Now add in wave action that’s working you up and down and it becomes apparent your goal is to keep your head out of the water and the eventual goal is to pull yourself out of the water and back into your boat and that’s moving in the hard direction not the easy one. Add in cold water and you may have 5 minutes to get all this accomplished. Once in the water you will likely have to get out of the coat you put on over the waders because it is cold out. Then you have to get the waders off. Doing all this at the same time you are trying to keep your boat and paddle with you. If you watch the video after he pops up his first instinct is to save his junk in his little bag and his phone and fishing pole. None of that is important if you are dead in five minutes. The fact he didn’t even try a reentry or righting his boat says it all. The thing that saved him in the end was 100% dumb luck someone saw it and then that there was a first responder that got there quick enough.

The real accident took place at his house before he ever left the driveway because his plan was faulty. The plan felt good though because the same plan had worked many times before. That’s a false sense of security.

I think the risk of getting “pulled down” is when you’re in a river with current where (similar to a canoe) if you dip an edge below the surface the volume quickly fills with water and then you go for a ride wherever the current is headed (and the forces could indeed pull you down…no contradiction with physics). I knew a guy whose father had his waders fill and ended up getting pulled/pushed under an ice sheet but he ended up OK. With zero current, a pool test would be best case scenario for evaluating the risks of waders.

The “pulling down” is felt more with a filled wader when you to try get above or out of water line. So, when you tried to haul yourself back into a boat, think of the weight of the water in the wader that one is trying to lift out of the water. One might not even have the strenght to pull onto the boat and/or the added weight of the filled wader will end up with the boat rolling back over. Same happens when one takes a fall while wading a river (I’ve experienced this). The wader fills with water and as you try to stand up (depending on where you are in the river), you are deadlifting gallons of water and then trying to walk to shore on a slippery, uneven bottom, across the current, while mostly surrounded by icy water in the waders.

Wearing a wader belt will minimize the amount of water intrusion, but as @castoff noted, you have to take care to burp the wader.

A lot of the hardcore surf fishers have taken to wetsuits because of the liability presented by waterlogged waders. 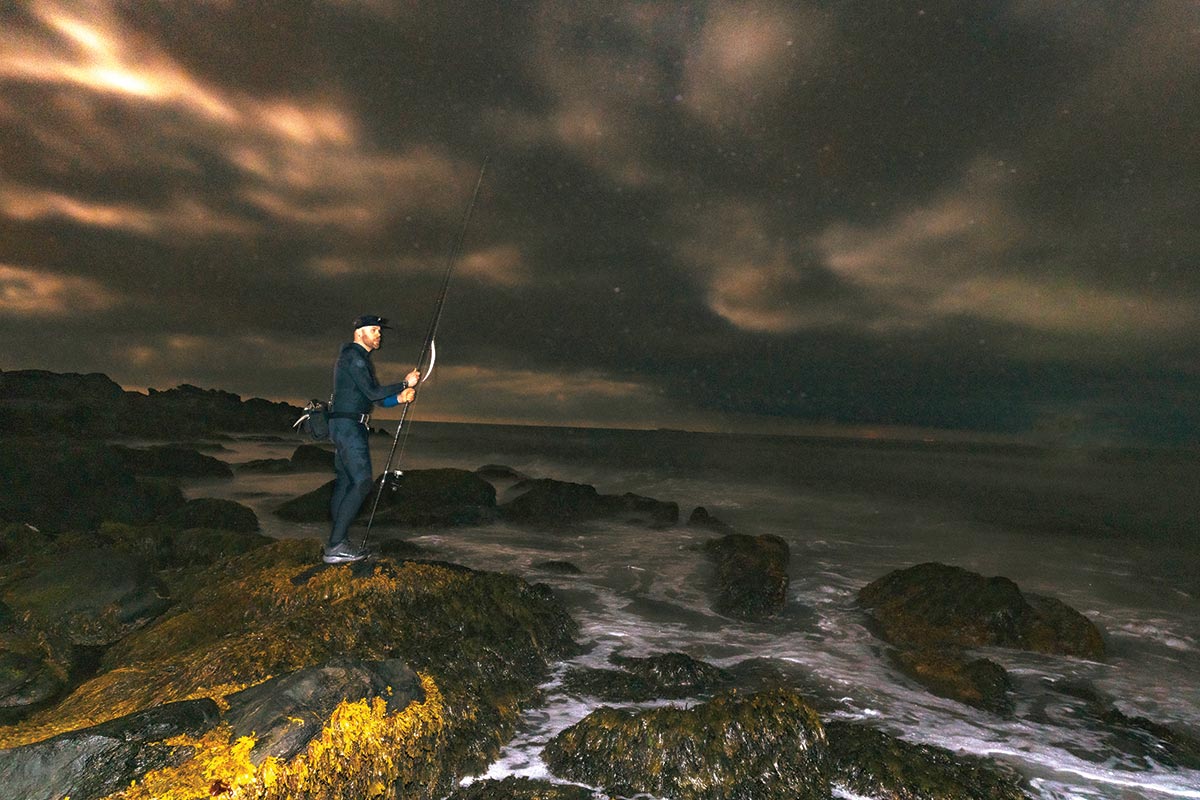 Wetsuits In The Surf: No Swimming Required - The Fisherman

You don’t have to swim to appreciate the many benefits afforded by a wetsuit.

For me personally, for the past decade, I’ve been flyfishing trout rivers mostly with hydroskin or 1-1.5 mm neo wear. If it is early in the season, I am usually in the 3 mm neoprene waters, with wader belt, that are more body hugging than the baggy breathable fabric type waders that are more common today.

Sounds reasonable- in effect the trapped water makes you that much more massive. Most of us have indeed dealt with a canoe full of water in a current- it’s a willful beast!

So true. What are the odds that somebody who didn’t think to take his PFD would have the sense to have his chest high waders properly secured? I have been surf fishing with chest waders on and been knocked over and even with it belted, I had a devil of a time getting back upright. Having been tossed by a big wave in deep water in the summer, I learned the effort required to get back up on the boat or swim to shore and I have seen others struggle similarly and I would not want to be encumbered by waders in cold water. I go wetsuit off shore if the air temp is below 70. If there is wind, I use dry pants or a rain suit bottom to break it.
Our Club as a Cold Weather Paddling Clinic coming up and this You Tube clip is on the playlist.

Waders are generally used by fishermen and most often when fishing in relatively shallow water from the shore. They are designed to allow you to stand or wade into the water while keeping you dry. They are also commonly used by fishermen on larger boats where waves, spray, and wet gear can leave you soaked.

In my opinion they are not designed or safe to wear in small craft like a kayak where the odds are higher that you may end up capsizing or otherwise end up in deep water. Once in the water it’s very hard to swim in them and if you can’t get the air out of them they can make it difficult to keep your head above the water in rough conditions. Filled with water they are very heavy and can make it very difficult to get back in the boat. Proper gear for a kayak in cold water is a properly worn wetsuit or drysuit, with a PFD of course. In warmer water splash pants and top will help keep you dry.

Why do you see fishermen use waders in a canoe or kayak? I suspect because they already own them for shore or river fishing or to use on larger boats. That, in addition to the fact that they just don’t know any better.

Upon seeing the first 10 seconds of the video came the question: why?
Wind - strong
Waves - large for any small boat
Cold - clearly not a warm season
Why - ego
Then as it played out:
Alone - says a lot
Gear - SOT ?
PFD - ?
Waders - why?
Communication - how and to whom?
Why - to brag about a fish?

Fortunate to make it back to shore. As to the Darwin award - close but no cigar - but the video may make the next guy think twice.

Used to shorten you life.

He said it was calm when he left. That’s always a sure thing on returning.

I thought fishing was about catching fish and eating them.I do not fish anymore ,but in the past we ate them

I mostly catch and release. Frankly, if everyone catches and eats, there won’t be much fish left. There is a trout river (more a stream) a little over an hour from me in Boston that I fished for going on 30 years. I used to catch “wild” brook and brown trout in there. “Wild” and naturally producing because I used catch 1, 2, 3 inch fry, along with adult size trout in the 6-10 inch range. These days, all I catch in there are 12-16" trout behemoths in what is a very small river. These are clearly stocked trout. One beautiful spring day fishing that river, I ran into a bunch of folks up and down the stream. Quite a few were tuggling stringers of 3-4 of of these hatchery trout to take home. The “wild” trout have apparently been wiped out for awhile now.

Testament of a fisherman

I fish because I love to. Because I love the environs where trout are found, which are invariably beautiful, and hate the environs where crowds of people are found, which are invariably ugly. Because of all the television commercials, cocktail parties, and assorted social posturing I thus escape. Because in a world where most men seem to spend their lives doing what they hate, my fishing is at once an endless source of delight and an act of small rebellion. Because trout do not lie or cheat and cannot be bought or bribed, or impressed by power, but respond only to quietude and humility, and endless patience. Because I suspect that men are going this way for the last time and I for one don’t want to waste the trip. Because mercifully there are no telephones on trout waters. Because in the woods I can find solitude without loneliness. … And finally, not because I regard fishing as being so terribly important, but because I suspect that so many of the other concerns of men are equally unimportant and not nearly so much fun.

— Robert Traver, Anatomy of a Fisherman

I use barbless flies or file them off. I enjoy seeing the fish, but don’t really care a lot about it’s exact length or weight, so being able to release it (most of the time) with a flick of the wrist on semi-slack line is perfect for me.

I do eat trout and other salt and freshwater fish. Although I might forgo eating much freshwater fish as it looks like they biomagnify forever chemicals It ends up in their flesh. I also release many of my catch. When the trout season is catch and release, I feel a barded hook should not be used. So true the sentiment expressed by Robert Traver about trout fishing, and it applies to the paddle sports as well. Nature can’t be bribed and does not cheat. We interact with it on its terms.

I am fine with eating some of the the catch, Just as I think hunters should eat the harvest of a hunt. We are part of larger natural circle of life (and death). A lot of folks in modern times are divorced from the process of fishing, hunting and gathering and thus more prone to be divorced from our role and impact on the larger circle of life on this planet.

I support eating some catch and occaisonally hunt (and process what I hunt) just to maintain my appreciation of what it takes to eat and live. With some many people, we have to moderate our taking/consumption of fish, fowl and animals. It’s not sustainable. I have a vegetable bed in my back yard for the same reasons.

I had a vegetable garden until the slugs, squirrels, and birds ate it.

Indeed, crushing the barbs or using barb-less hooks is a regulated requirement when fishing on many eastern board U.S. shores (depending on the target fish).

So with saltwater lures, I generally replace the treble hooks with barbless singles. This results in much less damage to the fish. If I forget to maintain a tight line, I end up with a “long range release.” Happened this past summer fishing the the Cape Cod Canal. “Released” two nice stripers within minutes of each other. I was looking down from the rock riprap and watching the fight and the release… Oh well, I was intending to release anyway.

“Oh well, I was intending to release anyway”

this big… nearly dragged me in…
(no really!)
I’ll get you next time, you!”