Warning for Fishermen in Kayaks

as opposed to kayakers who fish from their boats. John Skinner (renown saltwater fisherman) just posted this video: 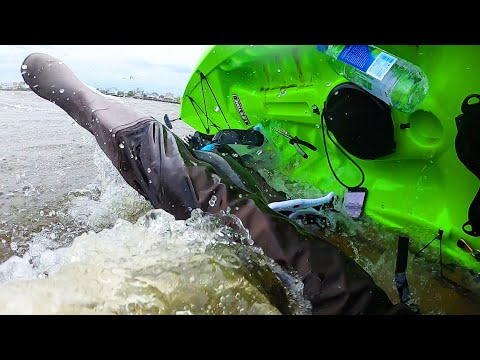 At the end when he goes in the pool with waders provides a good demonstration of why you should burp dry gear.

The guy that fell in fishing might have avoided near death, loss of his phone and fishing gear if he had spent time here reading some of the cold-water safety stuff. As we have often covered on this site the danger of cold water and the importance of dressing for immersion.

Some “kayak” fisherman types do show up here occasionally because of the “fishing forum.” If it helps even a few…

Darwin Award. Guy is dumb irregardless of what is said in the video.

I can’t find Kayak Waders. Didnt realize i needed them. What are they used for?

I can’t help but be a little judgmental, even though I’ve accused the forum of sometimes jumping to conclusions but yes, he gets this year’s Darwin Award.

Weather conditions: he must REALLY need a fish to be out in those conditions, dressed the way he was on a SOT. Failure of imagination that the conditions could be his un-doing.

Fishing. Is he really fishing or doing social media with a bass? The widely accepted ethic of fishing is to catch and release. Not catch, mess around with it for four minutes, then try to put it back in the water. It’s dead at that point. Maybe I’m misinterpreting his actions regarding intent to release but he got more that he bargained for messing with his phone while fiddling around with the fish. Nice fish though, and the picture would be just as convincing back on land.

Humans are not good at multitasking. Paddling, fishing, social media, paying attention to the weather. Not dying. Pick any two.

Finally, he doesn’t have a roll!

There are some things in life first hand experience is a great teacher and other things like boating and many others that some basic education can go a long way.

The sad part is this mentality isn’t rare where I live and I’m beginning to think it is wide spread.

People need to start spending some time in the water they plan to paddle. Trying things out in a pool is a great idea. That is where I used to try wet suits and dry suits often for the first time. It is a controlled environment. It is easy to find a thermometer. I used to carry a thermometer on my ski boat so people knew what to expect before they went over the side.

For raft and canoe trips on rivers, I like to have the crew stand in the river about thigh deep while we have the safety lecture. Some of them often go back to the truck and put on more clothes.

People that water ski, wake board and surf behind boats are keenly aware of water temps and how to dress for it because they are in the water all the time. Paddle boarders often seem oblivious. I see them without life jackets and in street clothes on lakes in the cold part of the year. People that paddle little plastic kayaks are the next worst offenders.

Spring boating always causes the most fatalities because of warm weather and cold water. Nobody goes on trips with me without wearing a PFD and suitable clothing for conditions. I told one guy that if he is going to wear hip waders and forget to put his life jacket back on, then we are never going to paddle together again. We haven’t. I have lost friendships over this subject. But I never want to knock on the door and inform a wife that their husband drowned in cold water.

You can find this summary on the americancanoe.org site. I read that the Coast Guard uses the same summary but they call out PFD usage (“no PFD”) separately. 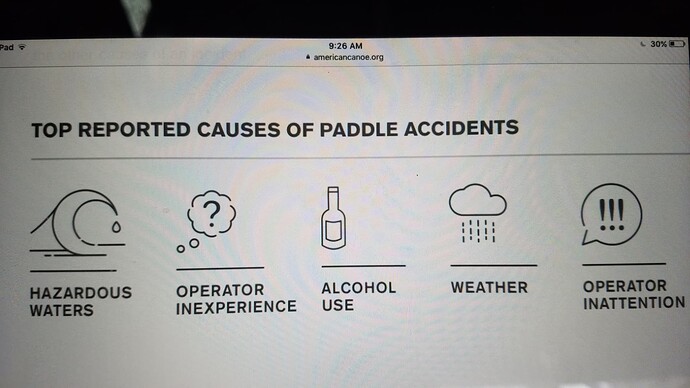 It seems to me that folks can get into real trouble when 2 or more of these factors are in play. So this guy had:

If he was drinking he’d qualify for the grand slam.

In the last couple of years I’ve had a couple of memorable experiences with Operator Inattention that worked out fine but made me darn happy that I was wearing a PFD.

I find the pool test very interesting. I have heard many people say over the years “the waders will fill with water and pull you down”. That has never made sense to me, when the waders are IN water to begin with. I do think their weight and general stiffness would work against you if you were attempting to swim, or climb out of the water. But the physics of filling with water and getting dragged down has never seemed right. Likewise, in glacial water, that they will “fill with silt”. The silt is suspended in the water - it takes days to settle out in a bucket. BTW, I never use waders, so it’s all theory to me. Anybody want to ‘weigh in’ on the subject?

I have worked in hip boots and waders a lot in my wildlife biology career, usually in wetlands and/or in boats on the water. And when I had law enforcement authority, we actually tested what the hip boots/waders and the weight of our “carry” equipment (hand gun, leather belt and holster, cuffs, ammo, etc) would do if we fell into the water. Did this at a local pool for in-service training one time. People were apprehensive, as you might expect.

It ended up being “no biggie” as the saying goes. A bit more awkward swimming, but easy enough to go to the bottom if needed to retrieve something. Won’t win any swimming races, but we could maneuver around easy enough. As shown in the video, waders had some potential advantage if you kept them up so they had air. Floatation and some insulation. Hip boots not so much.

The last time I went for a swim with hip boots, I was in thigh deep water and mud. Our engine had quit and I was pulling the boat back to the dock. After that slog through mud and water, I was beat. But even with filled hip boots it was no trouble climbing up onto the dock. A lot of water poured out when I layed down and lifted my legs into the air.

Good to test and figure out what you are up against.

The rubber is only extra weight with the wafers on.

Thank you- pretty much what I thought.

And then there are neoprene waders, which I assume float?

I think that train of thinking comes from the time when waders were rubber coated and acted as a reservoir filling with water. Most waders nowadays are much more advanced and usually are supplemented with a wading belt anyway

Water in the waders do not affect your bouncy, but air does.

Air in the feet of them can be problematic especially if you aren’t wearing a PFD. In the video you can see him struggling when he first entered the pool. He even said it was uncomfortable trying to keep his head up before taking the wader belt of and letting them fill with water. Now try to envision what might happen if you went in headfirst without a PFD and all the air went into the feet and lower legs of the waders. You want to burp a dry suit for this reason.

Some, air does help insulate and float you. Greg is right and that can be an advantage. I have gone down in near waist deep water with air trapped in my waders while trout fishing. I can attest to the difficulty of trying to stand back up. Without much air you don’t have that problem. I always burp them now. I also wear a wader belt to help keep some water out.

You need to die to win the Darwin.