Sing, this one is for you - I got a ~1987 Merv Larson Design waveski (in frickin’ mint condition!) along with a older (90s?) Lightning whitewater style paddle and immediately took it for a paddle

Considerig I know very little about rolling, are there any particularly useful resources out there?

Looking forward to learning this new paddlecraft. The long period swell of the winter is too shallow to surf on the surfski in open water, but produces some impressive shorebreak I’ve been eyeing to ride when my skills are up to snuff. 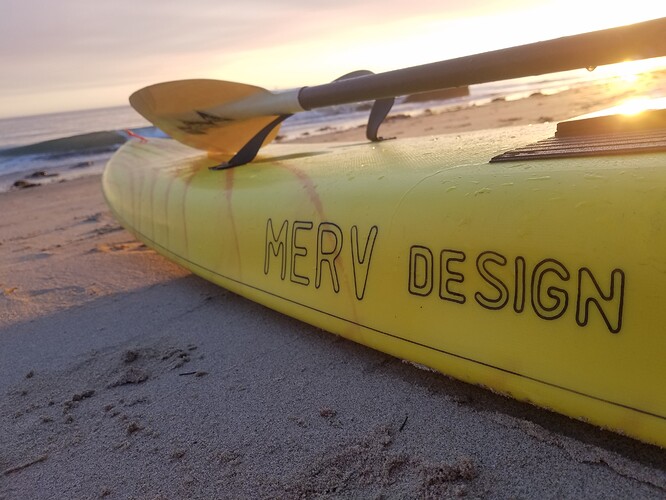 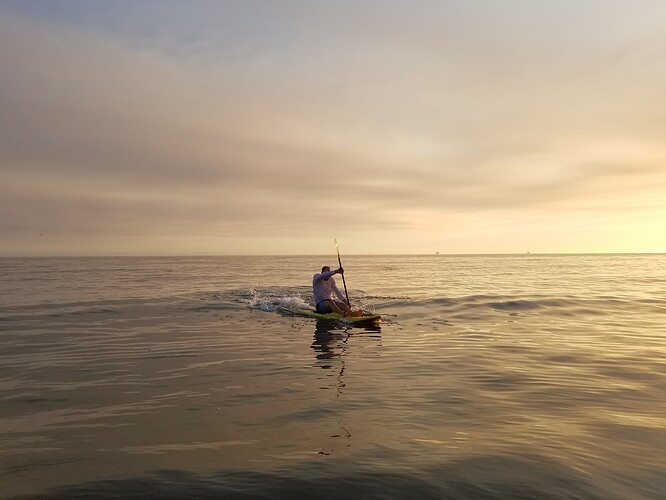 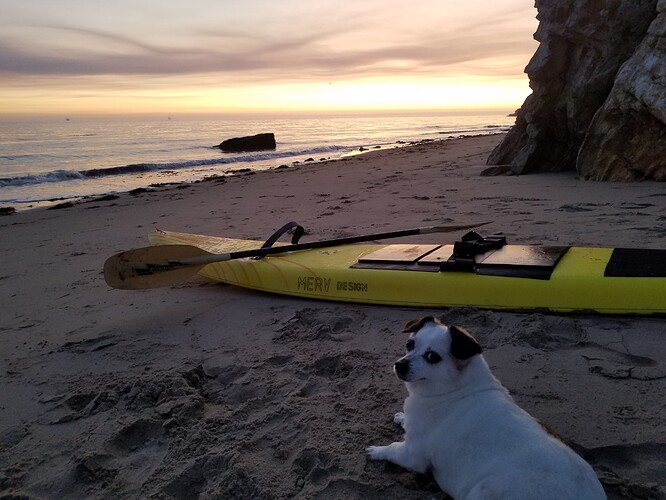 Long Live the legend of Merv.

Ok. Saw your other post that you don’t have a roll yet. I think spent some time learning to roll in a ww and/or touring kayak. Once you have that down, we can then talk adjustment in technique to roll a waveski. But, even before that, looking at the Merv footstraps, I think you will have to get a replacement set of individual footstraps rather than one big “feet loop” that your ski is equiped with. Having good footstraps are important as you need to leverage against (pull with your instep) the strap to snap a ski over, whereas with a kayak you have the inside of the cockpit to drive your hip/knee against in the snap.

For now, you can still use that ski. Use a short surfboard leash to make sure you don’t lose the ski when you have to bail. Then practice climbing back on (just like boardies) in between waves, re-buckling and then paddling back out. I seen plenty of waveskiers without rolls but who can remount really quickly. That is one of the beauty/advantage of the waveski over a surf kayak. Pick days with 2-3’ waves and just surf as much as you can, learn and enjoy. At the point, you have a good roll, you can enjoy even more on bigger wave days because you don’t have deal with/worry about remounting when conditions are more challenging.

Also, yes, the waveskis feel much tippier than most kayaks. But, the more you paddle (with relaxed hips and good braces), the more you’ll feel comfortable. Once you catch a wave, you’ll understand the thrill of the ski. Once you start doing diagonal runs in front of the peeling pocket, you understand how this is so much different than surfing a kayak straight in front of the waveface until it breaks.

That Mervski is probably ancient. Is the fiberglass brittle, yellow, and mushy when you push on it?

You are going to need to install dual foot straps, you can get pretty decent pair of Dakine windsurfer straps online for about 30 dollars. But very likely you are going to have to install a plug for the middle attachment points, which will involve using epoxy and glassing over the plug I bought a bunch of these at one time, I think you can still buy them online from [
https://www.murrays.com This is a good source for the foot straps too.

Check out the video “The Irish Waveski Roll” on you tube.

Also check out this video from Matt Barbarit and Caro Angibaud, it has a lot of good info on getting started and has a very brief expanation for doing an extended paddle roll.

As Sing says, just get a leash and get out there and start paddling and surfing. When you paddle out you can tuck your feet under the ski for added balance and practice dropping your feet, so you pick up stability when knocked off balance in the waves.

Excellent rolling video! Although Im sure i’ll strugle for a while I’ll have to give it some more attempts this weekend.

I was thinking the foot strap was a tad strange. The guy I bought it off of replaced it with his own strap, but it doesnt provide very secure contact with your feet. Thanks for the link.

The board and glass in mint. Its a 1987 vintage but it is almost new. Not mushy or UV faded like many boats of that age. The guy took great care of it.

Thanks for the tips so far!

I have a Merv ski of similar vintage that was set up for a paddler with paralyzed legs, it had the one strap foot strap. I found it impossible to roll. I put on a new foot strap and added some foam to to the foot wells to get my legs lifted a bit for more leverage to turn and roll. This ski had been stolen and thrown in a canyon and was really trashed. I paid $100 for it with hopes of letting the rightful owner get it back. He had already replaced it with a new ski, so I had a beater that I fixed up and use as a loaner when friends want to borrow a ski when they come to town. She is called “Ugly Betty” Three or four former posters on Pnet have ridden this ski, but I don’t think they are posting anymore. Last week I broke the footstrap on my favorite ski so I took Ugly Betty out for some fun waves, she’s kind of slow on a fast breaking wave, but you can take off really late or wait until you just hit by a wall of foam and surf out of it. Best $100 I ever spent. If you take the fin out she will 360 like a bar of soap, and slide down wave faces sideways. Definitely scares the crap out of the boardies in the lineup.