After looking at several similar guns, I bought one primarily because it felt better in my hand.
All in that family have lots of pro and con reviews.
I thought there might be an ordinary person with a comment here.
It will be a house or car gun. I have a CWP.

As a gunsmith, I see and talk to a LOT of people who shoot. I know several who have the S&W Shields and so far none have had any complaints.
Guns are like any tool that can be used in dangerous or safe ways. If you don’t have experience with handguns I’d suggest getting some good top quality training.

If you have the training already, that’s even better.

I bought a Shield 9mm when they first came out. They were nearly impossible to find for a couple of years, because of such high demand. I haven’t shot it anywhere near as much as I’d like, but I’ve also never had any issues. Honestly, you can’t go wrong with almost any S&W firearm. My AR is also S&W, and I have no complaints there, either.

Good points. My handgun training was started by my Dad when I was a youngster. He was a LEO and a WW2 veteran. Although he carried as his job, he thought pistols were mostly worthless.
Of course I was fascinated by them. I have no idea how he imparted the rules, but his duty weapon stayed loaded
on his desk at home when he wasn’t wearing it. My brother and I both knew that it was off limits as was the pistol next to my parents bed.
He let us shoot both when supervised.
Then there was the Army. I don’t like M16 style rifles and haven’t since 1968.
I’ve owned 10 handguns I think. I’ve got 3 now but they don’t get fired very often.
Yes, I am fairly well in trained in the safety aspects.
Interestingly, my kids aren’t interested in firearms but have all been safety trained as have their kids.

I own a Shield 1.0. For myself I rate it as “so-so” to “OK”. I find the trigger to be pretty uninspiring. I understand that the 2.0 version is considerably better in that regard but I haven’t shot one. Another issue I have with the pistol is that the slide is somewhat hard to lock open with the slide stop, and the slide is virtually impossible to release from the locked open position using the slide stop. Yes, I know a lot of pistol gurus recommend always releasing the slide by pulling it back with your weak hand. But what if you find you have only one functional arm to work with? It is possible to swap magazines one-handed, but releasing the slide on the Shield one-handed would present an unwanted challenge.

On the plus side, the pistol has been reliable. The trigger action is stiff enough that I have some difficulty keeping the sights aligned and on-target even when dry firing and that affects its accuracy in my hands. But let’s face it, for self-defense purposes you are only going to be using a pistol this small with a sight radius this short up close where fine accuracy doesn’t count for too much.

How the pistol fits your hand counts for a lot. The front strap of the grip of the Shield is too “sharp” for my hand which is a bit on the large side. It sort of feels like I am holding a blunt hatchet head in my hand so it is not the most comfortable pistol to shoot for me.

Magazine capacity for the Shield is somewhat limited compared to some pistols that came after. I am thinking the Sig Sauer P365 and the Springfield Armory Hellcat. I don’t own either of those and I have never shot the Hellcat, but I have shot the P365 a number of times and find it better than the S&W Shield in just about every way.

The S&W revolver is an excellent reliable tool. The main drawback is the way the profile carries. Although 12 lb trigger seems excessive, it’s consistent and smooth. The DA Beretta is 15 lb, but comparablely accurate. My son owns a Shield. The trigger is poor. I cautioned him about a trigger kit that lightens the action, because improper installation can cause failure to operate in certain attitudes, and creates liability and defense issues in court. New model addressed the problem. Beretta 92 and SIG competed in military tests. SIG won. Beretta offered consessions to obtain the contract. I personally observed Beretta 92s fire 10s of thousands of rounds without cleaning. I never saw a misfire or operation issue. The ultimate for me to handle and wear is the Browning HP with Pachmyer grips (Israeli SF and WW2 Germans preferred it to Luger and P38-same lock up as Beretta) but it’s SA, and must be held right to ensure functioning. I would depend on a Beretta without hesitation, but recommend against sub sonic ammo. SIG has greater longevity due to the lock up system. AR platform is the longest in service combat rifle for US military, widely copied, upgraded, accurate and improved. Current configuration is in the top echelon of world inventory.

I have never fired a Shield so can’t really comment.

I tend to like all metal , hammer fired Sig’s {love the DAK trigger that most despise, feels like a finely tuned revolver trigger} I don’t care much about capacity. I was raised to be frugal and when when someone fired 2 shots , it meant 2 deer.

rather a strange topic for a paddling forum

P365 had some firing pin and function issues. Not sure anyone makes aftermarket part. If there is a feed/extraction issue, its surely chamber dimension. To fix, find a trusted shop to drop in go/no-go gauge. If undersized, have chamber reamed to spec. SIG 1911 does have that issue, so did Springfield, but they fixed it.

Not stange until somebody is offended. Plastic and aluminum frames are fine, but weight is removed from the area that should favor weight. Use the front sight always when arm length.

Yes, some of the earlier edition P365’s had firing pins that broke. A pretty serious problem. The P365 firing pin was redesigned at least twice. There was a company making aftermarket firing pins for the P365. My understanding is that the latest revision of the P365 has solved the problem but I haven’t really kept up with the issue so I am not certain if that is completely true or whether the aftermarket firing pins are still available.

There was also a problem with the trigger return spring on early P365s. This resulted in a dead trigger and like the broken firing pin issue it came on without any advanced warning. I believe that issue has also been addressed.

Thank you. The hack resolution to fix feed issues is to ramp and polish, sometimes to the point of leaving unsupported case.

I fondled the Ruger Max 9, the 365, and the Shield 9 EZ repeatedly before making up my mind. And read way too many reviews. The gun shop owner was patient for a month.
The Shield fit my hand best and I liked the sights and has a good trigger. And it was the cheapest of the 3. And he gave me a great trade in on the Sig P320 I bought from him 3 years ago. The 320 was the best semi auto I ever owned but was a beast size wise.
We can justify anything using the same criteria we use on boats.
I want it!

String, what a shame, but fit is critical.

I hope you spend sufficient range time with it to become very comfortable and highly proficient. And that you never have to use it under duress.

I have shot it twice. The recoil is gentle for a 9 and I’m as accurate with it as the Sig. That means I can stay on the target at 30’ and once in awhile hit the bull’s eye. Surprised that a pistol that small can do that. I expect to improve with each range trip. 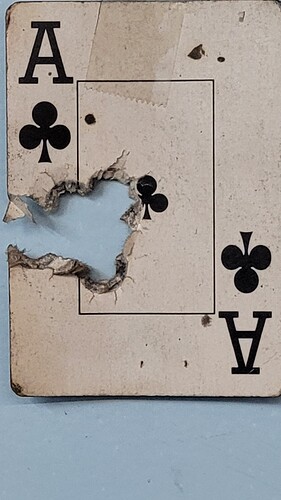 One of your Army AMU shooters at the 2021 Dixie match shot this at 50 yards with a 9mm or 45acp. A worked accurized pistol of course-. 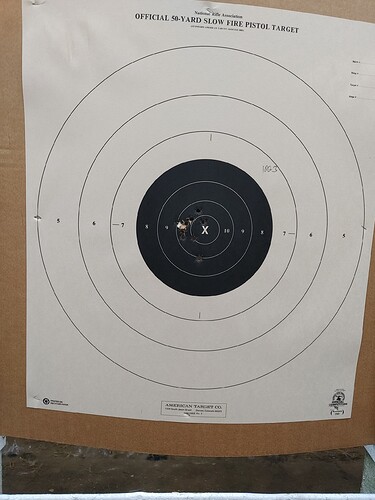 Posted for no particular reason.