We finally got some rain - time for a Tville run

We finally got some rain last week, and the local message boards were busy on Thursday and Friday with people getting out to paddle. Unfortunately, I had to work, so I watched as the gages gradually dropped. By Saturday, the options were pretty limited, but an old stand by was running – Tville on the Farmington River in CT.

Tariffville Gorge, known locally as Tville, is one of the best-known whitewater runs in southern New England. It is the site of an annual spring slalom race, and has hosted National and Olympic whitewater trials. The run itself is short - just 1.5 miles - but the water runs most of the year, and there are play spots for paddlers of all skill levels. At yesterday’s level it was a class II/(easy)III run.

Temps were in the 40’s, and there was a brisk wind blowing as we put in at Tarrifville Park. We had 8 boats – one canoe (guess who) and 7 kayaks. The river starts off easy with the few small ledges and some nice surf waves. The best of these are Cathy’s Wave and the Horseshoe Ledge. As you enter the gorge, the intensity picks up a bit. There is a nice wave train along the Bridge Abutment Rapid. Freestyle boaters love the Play Hole, which is great for flips, enders and other tricks. The run finishes with the Ledges and Typwriter. Run took us about 2 1/2 hours. 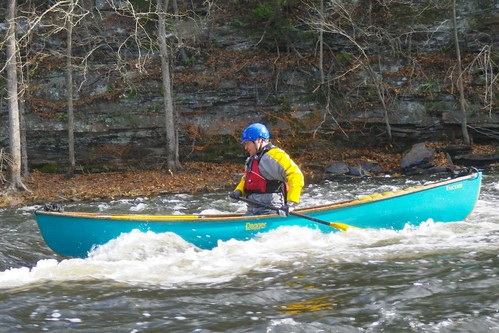 nic pics, I’ve alreadygone into sneak route mode, no playing, boating around all holes and waves, taking dry lines- and that’s in my kayak where I’m half way covered up- you’ll are hardcore in new england!

@tdaniel said:
I’ve alreadygone into sneak route mode, no playing, boating around all holes and waves, taking dry lines- and that’s in my kayak where I’m half way covered up- you’ll are hardcore in new england!

Wasn’t bad yesterday - no swims to report. I swam a couple of weeks ago up in NH - that was COLD. but I was out of the water quick. Gotta love a drysuit.