Wee Lassie with float bags and sponsons on class 2?

I’ve been looking for a kayak with which to do some light saltwater. The best option seems to be the Eddyline Caribbean 14. The one problem with this is that it’s not a “do everything” craft. Due to storage issues, I don’t want to own a fleet. I wouldn’t chance taking a Caribbean 14 in a river.

I happen to have a Mohawk Wee Lassie type (sort of), that has about a11.5’ fiberglass hull, though I’m really not sure of the exact specs off hand. It’s a great boat, since it weighs about 20 lbs., and is easy to throw up on the car at the last minute. It occurs to me that if I put float bags in it, it might actually make an OK river boat. I don’t do proper “whitewater”. I’m talking about running Class 2 max with this thing. I don’t know what kind of rocker it has, but it’s difficult to keep straight on flat water, so it will probably be maneuverable enough.

I tested it with bricks once, and found that at about 225 lbs, it could be paddled in absolutely flat water, but I wouldn’t want to go much heavier. The canoe happens to have foam sponsons on each side, which is a bonus. I weigh 150 lbs. Is there any reason why I shouldn’t do this?

I wouldn’t even think about it.

You say that you don’t do proper whitewater but talk about running Class II water. This leads me to believe that you may not have a real understanding of what Class II whitewater can involve. Since the International Scale for rating rapid difficulty goes up to Class V, Class II might seem pretty mild to some. But I could show you 1/2 mile long stretches of continuous Class II water and I am sure that you would consider it to be “proper whitewater”.

I don’t know the exact specs on your canoe, but boats of the Wee Lassie type are pack canoes with little depth, typically less than 12" at center. Which means relatively little free board, and you need free board in even relatively mild whitewater to keep water from standing waves and such out of the boat Also, a composite canoe 11.5’ in length that weighs less than 30 lbs has to be a very light layup, easily damaged if you impact a rock. Rapids of Class II rating tend to be rather technical with lots of rocks, or else they have strong current with sizable standing waves. Those features are what makes them Class II rather than Class I. Your canoe is inadequate for either.

Float bags do not keep water out of the boat. Even if you packed in as much bag as you could there would still be plenty of room for water. A gallon of water weighs 8.3 lbs. You weigh 150 lbs and possibly closer to 160 lbs when you add in paddling clothing, a PFD, reasonable footwear, and a bottle of water. If you get nine gallons of water in the boat, you are going to be above a 225 lb load in the canoe. And one wave can put 9 gallons of water in an open boat in an instant.

I run short Class 2 in my RapidFire. Light does not have to mean weak. Weakness is also a function of the layup schedule and the exact match of resin to fabric. My boat is 23 lbs and while not for tech Class 2 with many rocks it does ok with the occasional rock… Pete is right that these pack canoes are shallow but I have had enough experience with the hull shape of the RF so I know that it deflects waves down. I know nothing of the shape of your Wee Lassie ( a name about as meaningful as Prospector… The original Wee Lassie was designed for a tubercular 95 lb man) but assume it has constant flare… The sponsons are not a plus… Just makes the boat wider

What I would NOT do is run something like Chase Rapids… two miles of Class 2 with lots of pinning opportunities… I would run Spencer Rips which is at most 300 feet.

If you have the typical Wee Lassie ten foot long canoe. you need decks… It won’t take much water to make your craft uncontrollable.

there is some more good info here https://paddling.com/learn/classification-of-rapids-water-level-and-canoeists/

Good to know. I guess I won’t be doing this. Thanks.

As Peter and Kim say, class II covers a lot of ground, and many people confuse quickwater/class I rapids as class II. A class II rock garden might look like this… 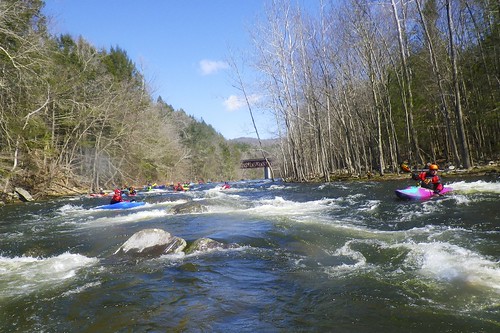 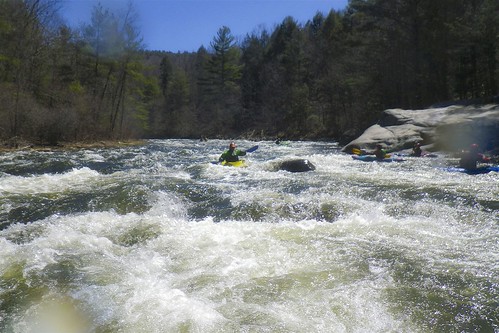 They look very different, but are both relatively straight forward class II rapids. Hopefully you wouldn’t stumble into them without knowing. Even if you did, you would probably make it through fine (although a surprising number of people die on class II rapids). If what you are really thinking about is a river with some current, maybe some quickwater stretches, go with the Wee Lassie. Skip the bags.

The diff between the above two pictures being with or without the rocks is huge. I have been pinned against a rock not much bigger than a couple of the ones shown in the upper picture, in a northeastern rock garden rated as class II. Which I have been told tends to be milder than the equivalent rating in some other parts of the country. I have paddled with WW newbies who bounced thru the second picture without incident because there is nothing to hit and they were in a boat with a lot of forgiveness.

I had to exit the boat and get rescued in the first case. A canoe might have more of a tendency to slip around the rock than my little Innazone did, but don’t mistake rocks for zero threat even in class II.

And wear a helmet. I have had my WW helmet find a rock a couple of times that I was glad my actual skull did not have to share.

My favorite local class 2 stretch is mostly flat, with a couple c2 wavetrains. Everybody is aware of the potential swamping in the wavetrains, but there are also these whirlpool things that appear randomly from below, that will swamp such a small boat without warning. I watched a kayak literally vanish under its paddler in one, as he paddled madly to get through it (and since it was a skirted high-volume river kayak, it bobbed right back up). Just this little tub drain of a thing that opened up in front of him and sucked his boat under for a few seconds - long enough to eat any canoe labeled “Wee”.

The wavetrains are “point & shoot”. No rocks to miss, and no turns to make, but they will easily swamp a small shallow canoe, if not navigated perfectly. On this river, you could easily get out and carry around the two biggest wavetrains, but those random vortexes can catch you off-guard. It’s a rare year that goes by without someone being fooled into thinking this river stretch has little to fear, and paying the price for trying it with not enough boat and/or skill, and no plan for rescue.