Hi – New here, though I have tried to look through the topics and didn’t see an answer. I’m purchasing a new canoe this summer. Wondering what is reasonable for portaging 1km or so at a time over medium path terrain (small hills, roots, and turns). Trying to balance the durability of a canoe for rocky rivers but also the weight and size (18"+)for a family. is 70-90lbs (70 kevlar / 88 FG) too heavy?

Is that too heavy for you? Have you tried carrying that weight over the terrain you specified? Will a boat that size negotiate the turns ?

70# for an 18 foot kevlar canoe and 88# in glass!!! Would think you are dealing with the wrong canoe company. In my yard are 4 18foot canoe in fiberglass and not one weighs over 65#. there is a 23 foot canoe in kevlar that weighs 64# with 4 seats, 3 footbraces and a laminated yoke. At 72 years of age I consider 60# my limit for the kind of portage you describe. I have portaged the 64# Minnesota 4 over a mile on the infamous Raquette Falls Carry in the Adirondacks, but that took everything i had. As a 40 something I portaged 80# Grummans and Old Town Discoveries on Boy Scout Trips and sur vived, but its not something i would attempt now. 50# or less is the desired weight now.

Thank you, we are mid 30s and need something large as we are usually 3 adults plus a dog plus gear. It’s the clipper mackenzie 18.6 I’m looking at but comparing to like a swift keewaydin for example it’s 20lbs différence and I don’t really understand why.

Hi, Mokka00,
Western Canoe builds a durable Kevlar layup but they are heavier than some of the competition’s comparable layups, that is, with gelcoat exteriors. I paddled a 17 ft. Clipper Prospector in the Kevlar/Duraflex layup and it weighed 68 lbs. It was heavy but very durable, surviving rocky Class 2 and Class 3 whitewater runs. But I eventually sold that canoe because it just weighed more than I wanted to deal with as I get older.

It’s a tough choice prioritizing durability over weight. We chose durability and suffered through some fairly long, steep portages (one was 5km) because we’d be out paddling wilderness whitewater in northern British Columbia. On the other hand, we met up with a group of experienced Canadian paddlers out on the same stretch of river with skin coat Kevlar boats and they had no hesitation bringing those canoes on that trip. They did bring along enough patching materials and epoxy to fix most any damage that might occur.

Lighter layups are so much more enjoyable to haul around and portage but you do have to pay more attention to how they get treated. On the other hand, if you want the added durability of a heavier layup and you don’t mind lugging a 70 lb. canoe around while you’re still young that’s not a bad option.

This might just be me, but I wouldn’t put 3 adults a dog and gear in one canoe.

Oh did i mention the cat too

? We’re safe, we do multi-trips with people and gear when needed to break it up. Ever figure out the lion, goat and grass puzzle? That’s basically us 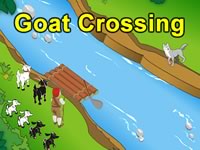 A Man wants to bring a Lion, a goat, and Grass across the river. The boat is tiny and can only carry one passenger at a time. If he leaves the Lion and

Thank you for the advice, I think maybe it’s knowing the number layers of fabric that I might be missing in my “equation”. This is very helpful advice, thank you.

For the lake country with a lot of portages it makes sense to find a kevlar canoe made by a reputable company, then the weight is more like 45-55 pounds.

If you have two adults to do the carry even 90 lbs is quite doable, especially over carries as short as 1km. The more money you spend the lighter the load will get. Personally I’d go for a 70 lb aluminum over a 90 lb plastic.

While brute force can portage a maximum weight canoe, you will soon be cursing every inch of the way. Have you considered a wheeled cart? Even on uneven terrain with roots, turns and rocks, there are cart styles that will perform well. Some of the portages on the Adirondack 90 mile race are as you describe (though some are worse), I have used a bicycle wheel style cart bouncing along at full running speed successfully over rocks and roots and mud. It takes some practice and careful creatively when strapping down, but it works. Strongly consider the waters you plan to paddle. Lots of rocks and some whitewater - go heavy and tough it out; mainly slow rivers and quiet lakes for wilderness camping - go light and you will better enjoy the sport.

The other thing I would suggest, as mentioned briefly above, is to consider a C4 for you and your partners. They can be easily paddled with just 3 paddlers, or you can easily recruit a 4th, I am sure. It would be much safer, more comfortable, and easier to carry all of your gear and livestock. Wenonah sells a C3 if you don’t want a C4. A kevlar Wenonah Minnesota C4 weighs a bit over 60 pounds. A couple of my much younger mid-40’s partners carry that thing at a run shoulder to shoulder on all of the 90 miler race portages totaling 5 miles - without wheels. If you want to go even lighter, Savage River has a C4 in carbon fiber that is nearly 10 pounds lighter. I have run with one of these on the 90 miler, as well as on the Yukon River races (fast current, no portages there but plenty of rough gravel bars to drag over), no real damage suffered.

Hi Mokka,
I see you are referencing Swift canoes so I’m guessing you don’t have a problem with Canadian made canoes?
Tough and durable and light don’t have to be exclusive terms for the same canoe. When Royalex stopped being produced for whitewater canoes, lots of canoe companies started to look for alternative construction materials. Personally, I would want as light and tough as I could find to carry over portages and still survive.
So I have tried to avoid canoes made of fiberglass, aluminum, Royalex, multiple layers of polypropylene. I have looked for canoes made of T-Formex (Esquif Canoes makes this product and it is used now by other canoe companies as a tough durable material for rugged expeditions dragging over rocks); or, canoe hulls made of durable and lighter materials like the H2O Epoxy canoes that don’t add the weight of gelcoating but use combination of kevlar, Innegra/basalt and epoxy to create very tough but super light (low 40 pounds for 18 foot canoes), or Novacraft canoe’s TuffStuff material. Check these canoes out before committing to heavy!

If you have avoided Royalex canoes because of their weight then I would avoid T-formex canoes. T-formex canoes seem to be a few pounds heavier still than identical models that were formerly molded in Royalex.

I have portaged the 64# Minnesota 4 over a mile on the infamous Raquette Falls Carry in the Adirondacks, but that took everything i had.

That Raquette Falls portage is a tough one. Only did it once - completed it in two loads. Boat, big bag and wheels on the first; second big bag, small bag and cooler on the second. 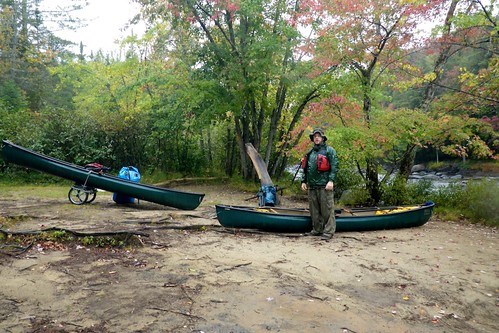 Definitely recommend wheels when you can use them, but it is a pain to lug them around when you can’t.

I have been over the Raquette Falls carry in excess of 35 times that I can count over the years I have been paddling, Most of those times at the fastest pace I could muster during the Adirondack 90 mile canoe race. Always single tripping. I’ve used every kind of canoe, from heavy cedar strip voyageurs, to C4s, C2s, to my solo Placidboat. The trail forces you up a long series of three uphill pitches over jumbled rock “stairs” before reaching the final height of land where it becomes only just barely feasible to use wheels beyond, but still with a lot of hefing still over rocks on the second 2/3 of the full 1.1 mile long carry. It takes me more time to complete as the years go by, but last year I had a couple of 40-ish brothers carry the C4 I was paddling with them, and they did not want to use noodles I had padded on the gunwales, nor wheels at any stage. They hefted the kevlar Minnesota 4 upright on their shoulders and ran the trail as our other 70 yr old partner and I hobbled along behind.

Clipper canoes seem to be heavier than some of their competition, but perhaps more durable too. I took their “ultralight” layup on a trip on the Rio Grande and it did surprisingly well. That is their best recipe, in my opinion, in that it forgoes the gel coat and uses s-glass for the outer layer (and you can custom order expedition lay-ups with more elastic resin if you really want to). I think you need to balance not just weight and toughness, but also price. I’d expect an H20 canoe that infuses epoxy through innegra will be tougher and lighter, but also considerably more expensive. It is a reality that bigger canoes need to be heavier, so depending on your circumstances I’d maybe consider two smaller ones. If you are near Clipper, you are also near Hellman, and they make a few decent light/tough designs. Also, if you can learn how to use epoxy to repair canoes, you can get by with much less weight. On the other hand, if you can handle the weight, something like the Esquif Mirimachi is indestructible and has loads of capacity.

My canoe is 80lbs and it’s a nightmare.

The last time I was in the Boundary Waters doing serious portaging was in 1985. The rental fleet was still aluminum then and boats weighed 65-70 pounds. Now the rental fleet is mostly kevlar boats that are much lighter.

Wenonah makes many big light and fast canoes in kevlar that weigh under 55 pounds.