Hi, I was wondering if anyone had any information on a Wenonah Sheila canoe. The serial model says Sheila. I emailed Wenonah personally but they replied with “Hello, The Sheila was not manufactured by Wenonah. It was manufactured by Pacific Water Sports in Washington state. We have no other information available.” It says Jensen designed on the side. I wanted to know what year it was made and the back story on why it was named Sheila and not just a model #? Thanks in advance.

I might get back with Wenonah. It’s my understanding that the “Sheila” was the name given to the J-120, as that was the name of the woman that Jensen designed the hull for. I’ve also heard it could be a bit bigger than a 120 (maybe a 150), but either way very small. Ask Wenonah for any info on their smaller mid-1980s J boats and see which one fits. This isn’t mine, but I imagine your tag looks something like this one. I’d send a copy of your tag to Wenonah. My guess is that the person you corresponded with hasn’t been there that long. 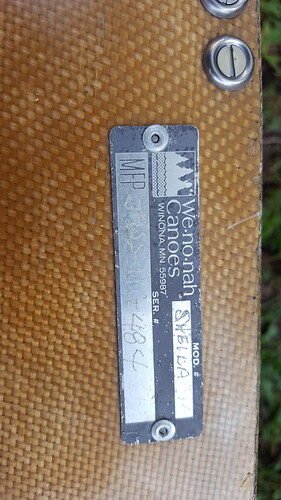 Thanks for your reply. That is my tag actually! lol I sent it to Wenonah in my email, unable to attach a file and still got that response from them. I will try again. I’m assuming I am at least the 4th or 5th owner of this boat.

That’s pretty funny. Are you in the KC area? Or a 340 paddler? I pulled that tag from an ad on the Rivermiles forum from a few years ago that I had remembered seeing. It was for sale in the KC MO area. It’s a cool boat of you fit it. If you decide to part with it…

I actually bought it from a guy in Dallas! not a 340 paddler… yet. Been paddling tandems for 2 years now, ready to get used to being on my own, so not just ready to part with it

As ptickner recalled the smallest of the J series solos was the J-120 with it being designed by Gene Jensen for Sheila Johnson. The numbers of the J series solos were to denote the ideal paddler weight. I weighed about 180 when i test paddled a Sheila and it was the first solo to dump me in a calm pond. my 10 year old daughter thought the canoe was just made for her. The last 3 digits of the HIN number are the month and year of manufacture. Enjoy that canoe, its a piece of history.

thank you! so the canoe was made in April 1984! amazing! I had no idea that it was that old. I looked up the ad from the Rivermiles forum and that one looked like it needed some work. The guy I bought it from, either him or previous owner, refinished it nicely.