I just had the ferrule on my Werner Cyprus replaced and I thought some people (okay maybe two people, one?) might be interested. I’ll try to keep this as short and as to the point as I can.

I bought this paddle at a trade show, at a healthy discount about 6-7 years ago. It’s a bent shaft, regular diameter and 210cm. I really like the paddle. It weighs 26.3oz and has become my favourite high-angle paddle, although a WRC GP is currently giving it a run for its money.

Anyway, last summer I noticed the ferrule was developing a little bit of play, maybe just a millimeter or so, but I just put it down to age and wear and tear. But, a month ago I took the paddle out and noticed that the ferrule wouldn’t lock together. The button certainly wasn’t jammed, it pressed in and came back out easily and I take really good care of this paddle taking it apart and rinsing it in fresh water after every outing and I 303 it fairly regularly. Consequently it still pretty much looks like new.

So I got in touch with Werner. They told me to soak the ferrule halves in warm soapy water overnight and even though I told them the button wasn’t stuck I tried what they suggested but the ferrule still wouldn’t lock. Intrigued by how their ferrule works I did some digging. Unlike older designs that lock with a button, Werner’s button is on the female end of the ferrule and not the male end. And the button really doesn’t do any locking. The button’s molding inside the ferrule contains a small hook and this hook engages inside a lip on the inner part of the male ferrule to lock the two pieces in place. The button (and the hook) assembly is spring loaded to keep it in place. Pressing the button moves the hook away from the lip allowing the parts to be separated. To lock the ferrule, simply pressing the two halves together depresses the spring and locks the hook to the lip with a snap.

Here are Werner’s drawings from their original patent…

Looking down inside the ferrule I could also see that the hook had come apart from the button assembly and that’s why my paddle was failing to lock together.

I talked to Werner again and they suggested I send the paddle in to them and they would inspect it and decide if it was a warranty claim or a repair. A warranty claim would be fixed for free while a repair would be $52 to replace the ferrule plus return shipping. I duly boxed up the paddle and sent it them via USPS Ground. The postage from South Carolina to Washington State was $57.

About a week later I received a call from Werner telling me they considered this a repair rather than a warranty claim. I questioned this and they mentioned that the paddle was relatively old. I asked them what I could possibly have done to damage it like this so I might be better prepared in future. The CS agent didn’t really have an answer, especially as he could see that the paddle was in great shape. We talked about it for a while and he then told me that my paddle had an older ferrule which they have recently significantly improved with better design and sturdier materials. He then offered to cut the price of the repair to $31, and the return shipping would be $36 as they apparently have a flat rate deal with UPS. At this point I just wanted my paddle back so I gave him my credit card number. He told me I shouldn’t have any more problems with a sticking button. I reminded him for at least the third time that a sticking button had never been an issue with my paddle (but a sticking button is obviously a fairly well documented issue with these ferrules.)

Anyway, the paddle just arrived yesterday in great shape. It looks like new and works perfectly and I’m happy to have it back. I did notice some changes to the design so here are some photos of the new ferrule (below), and the ferrule on my wife’s – with a smaller shaft diameter - Cyprus (on top). 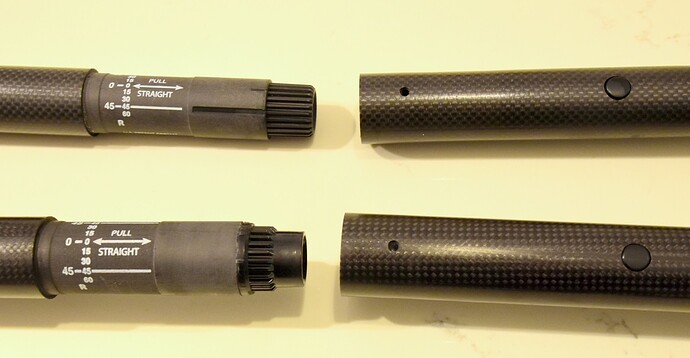 In retrospect I do think Werner’s ferrule is really pretty good. But its fault is that it is fairly complex and designed and manufactured to such tight tolerances that any tiny grains of sand or other junk can get in there and wreak havoc. I think you absolutely have to be prepared to “baby” these ferrules but for me at least it’s worth it as the ferrule itself is so smooth – the button hardly sticks up above the shaft – and it works so well…unless it breaks like mine did! I do think that in future I’ll be pressing the button in even when I assemble the paddle halves to minimize any wear on the hook. And even when mine did break the inner splines do a good job of maintaining the feathering angle and the ferrule still needed a good pull to separate the halves even if they weren’t exactly locked together.

Thanks for all the detailed info. I have a Werner with the old style ferrule and I think I’ll take your advice to push the button when assembling as well.

Great post. Thanks! I didn’t know of the ferrule redesign. I had one warranty claim with my Cyprus because of a faulty ferrule. I now assemble the paddle at home and it’s not taken apart until I return. I figure my well water is healthier for the paddle than fresh water from the lakes.

Will definitely depress the button when assembling.

Assembling and disassembling at home is a really good idea. I think I’ll start doing it too.

We now paddle exclusively in salt but the water in these Lowcountry marshes has a visibilty of about 3" with all the disintegrating spartina grass. It means that these estuaries are full of life but the water is also full of tiny particles (and organisms!).

Good info for sure. My old style Werner’s get babied with warm water soapy baths about 3 or 4 times a year (in addition to each trip soapy rinse) to keep them operating in my salty environment.

Assembling and disassembling at home is a really good idea.

Except that it voids most of the reason for having a split paddle in the first place.

I have two reasons for having split paddles:

So if I can only disassemble it at home, I might as well have a one-piece.

Except that it voids most of the reason for having a split paddle in the first place.

I have two reasons for having split paddles:

So if I can only disassemble it at home, I might as well have a one-piece.

Most of the time:

I always paddle with a partner, my wife, so I very rarely need or take a spare

So you will use her as a paddle if your paddle breaks? Does she know about that?

So you will use her as a paddle if your paddle breaks? Does she know about that?

Probably. No, not yet.

Seriously, I’d just take her paddle and tow her kayak.

But this is way off topic. 'Bye.

Assembly/disassembly at home is really no big deal and it’s an expensive paddle, so I take Werner’s advice:

Step 1. After every use take your paddle apart and rinse both sides inside and out with fresh water.
Step 2. Store your paddle hanging apart with blades up.
Step 3. NEVER use a lubricant on your ferrule! Our ferrules don’t like lubricants but they love lots of water!