No not a party, well, i guess it is to me. Anyone else on the west coast taking advantage of the big seas predicted for Sunday? I think I’ll do a 12 mile downwind from Goleta to Santa Barbara. Hopefully the wind picks up early and strong. Last time we had this forecast it turned out great. 6-8’ fast swell with 2-3’ wind waves that helped you catch the big ones. Lots of open water breaking waves. (I took multiple crumbling wave tops in the upper chest, like paddling through a 2’ breaking shore wave, except I was a mile out). It was rowdy!

I hope the forecast holds - 7 second interval is perfect for minimal paddling downwind runs. if the waves stack up over 4 feet at 7 seconds, those SOB’s get steep, but thats good in my book. 7’ @ 7 seconds looks a lot like my heaven. Only need to paddle between sets, or to catch the one in front of you. This forecast is why I have a 9" high chord rudder on my ski 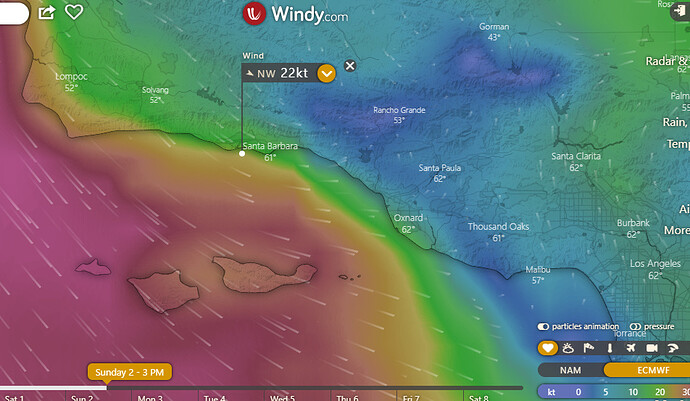 Just got back from week in Oakland. The Bay was flat but the temps were nice in the 60s. Got some scootering in, going from meetings to hotel and back. Downtown is flat. No excitement but still pleasant.

Will be San Diego in March. Odds are good that there’ll be waves. Just have to figure whether I have time…

Well i can get you out at first light or early evening until dark with a little warning. I’m going to be in Utah part time in March but can meet up with a wave ski or paddle board if I’m here in SD, if you want.

Thanks, Val. Appreciate the offer. Not sure exactly what my schedule will be either.

Hope you are fully recovered.

@3meterswell here’s for you buddy.
Its too long time since we had 30kts and 10ft+ seas. But tonight we did and it was epic. Here is a short video I shot when things calmed down to 20-25kts. Big swell was still rolling by. I was about 1/3 mile outside the breakwall when I shot this.
A minute after this I was paddling downwind briefly, then turned around. The wind made it very hard and slow to turn even with a big rudder and going into the turn with downwind speed. I was broadside to the waves and saw a massive one stack up and start to break right in front of me. I paused for a second and prepared to throw down a huge brace. It broke just in front of me and I was covered up to my shoulders in whitewater.
I stabbed my paddle in and did a massive draw brace, and threw my inside leg over the side of the bucket. At the same time I was being pushed along the whitewater like when surfing shorebreak, except there was just a 8’ wave in front of me! I stayed upright and started to sprint to gain enough speed to turn into the wind, nervously eyeing the next massive wave in the set building behind me.
Luckily random open water ocean waves typically do not break in the same spot so this one rumbled along and broke 50 yards in the distance. I finally turned upwind and kept hammering to get a little further outside the break wall, outside the bay’s circulat current pushing against the waves, and into flatter waves.
At this point I was maybe 1/4 mile outside the breakwall mouth, but still in the amazon sized rip current that funnels through the break wall and stacking up waves. one of the last waves of the set was one of the largest I’ve ever crested both in height and thickness (wave period). I climbed up a 6 footer and leveled off for a moment, then climbed and crested another 6-7 footer. The valley behind it was smooth and one of the largest wave toughs I’ve witnessed. It was epic.
I knew it was big when I mistook the 2 story Island Packers 60’ high speed catamaran for a single story speed boat. All I could see was the 2nd story.

I wish I could have downwinded somewhere around me. a guy i know did a 36 mile downwind from malibu to MDR in slightly smaller conditions in an OC1. I’ve always wanted to try something crazy like that on a 6’+ day in a ski with him. 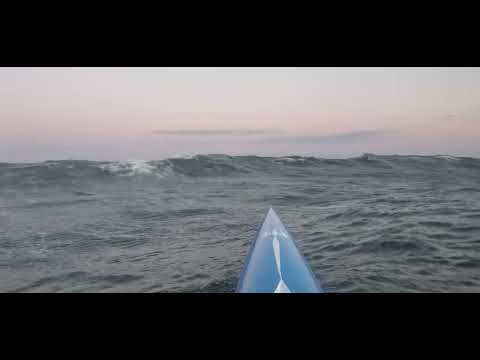 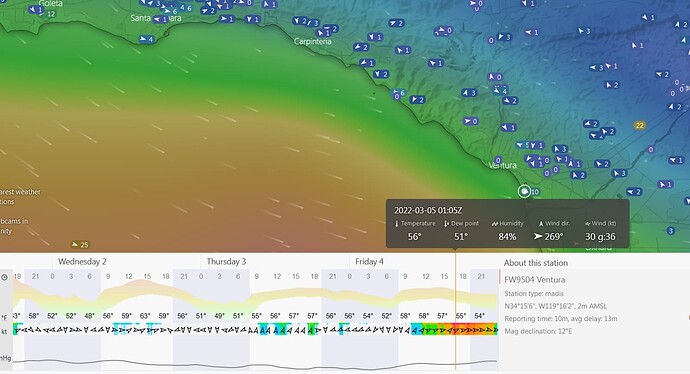 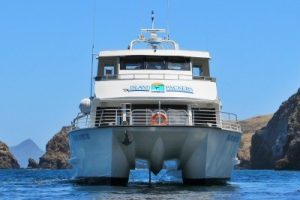 Nice. Thanks for the vid. Wow.

Watching those waves piques my own memories. It’s been a long while since I’ve surfed 12’ plus (double headers). The massive slabs and troughs… Usually there was a handful of us out in the line-up. But, everyone disappeared in their respective troughs. Once in awhile, would catch sight of someone gaining speed down the face of a massive waveface. Then the sight was gone. And, it’s back to keeping an eye to the horizon, watching for cautiously for “my wave” but also any waves with a deepening shadow right up at the crest that indicates an impending break. Don’t want to get caught in front of the piling foam that would just carry you away…

Wow. Vivid description. Glad that you got to experience that.

I hope you are out there with other paddlers. I paddle alone almost all the time, but out in 30 -40 kts and 12 -15 ft seas you might as well be on the darkside of the moon if you get separated from your ski. I guess when it’s onshore you’ll blow up on the beach eventually.

I pulled up the CDIP buoy data for the Santa Cruz Island Basin buoy off Ventura. It had the average swells around 6’, with a fair number 10 -12 ft, and the highest swell measured at 15’ around 5:00PM on the 4th. I for one can’t really judge wave height or swell height accurately at boat seat level unless I have a real good comparison, like somebody standing at the base of the wave. Video always makes things look smaller too. The largest swells I have ever been in were in a 60 ft boat in 20 ft storm seas in the strait between New Zealand and Stewart Island. If you would have told me the swells were 60 ft I would have believed it.

I for one can’t really judge wave height or swell height accurately at boat seat level unless I have a real good comparison, like somebody standing at the base of the wave.

Yup. I consider the boardies as human rulers.