Wetsuit for warmth without being wet?

I understand a wetsuit is intended to let water in to be warmed by the body. What about using one for splashing and as a base layer if you aren’t wet?

Thinking of options when paddling on flat water in cold weather.

Dry suits are rather expensive.

When we wore them on the dive boat before getting them wet they would definitely keep you warmer.

I once had a sailing jacket that zipped up and had the torso made of wet suite material and the arms made of waterproof fabric. It gave good arm movement while torso protection. I also used it on some dives.

It will keep you warmer than not wearing a wet suit…
A lot depends on water and air temps
Farmer John suits let cold water flush through the arms and chest area, not the best if you do go in the water if it is really cold.

Using a paddling jacket over a wetsuit will let you paddle in pretty cold air temperatures, gloves, hood and face protection become big issues when the air temps gets cold.

“What about using one for splashing and as a base layer if you aren’t wet?”

“Splashing”? you mean like a splash jacket? If it splashes you will be wet.

Warm as base layer?..yes at a 50 degree paddle recently while wearing a Hydroskin (light weight) with a splash jacket I was quite warm.

“… if you aren’t wet?”… On that paddle above I was warm enough to sweat AND thus I was wet. When is that time when you are not wet?

The people I know from Oregon all had sea kayaks and dry suits. What do the paddlers in your area that you paddle with use?

I have an NRS hydro skin “tank top” and it’s super warm…so warm I rarely use it.

If you wear a wet suit, your skin under that suit will be wet even if you don’t enter the water. You just won’t notice it until you take off the wet suit. Have a towel handy.

Before I got my dry suit I paddled in cold weather (flat water) wearing a Farmer Jane full length wet suit. A warm 1/4 zip long sleeved shirt was worn over the wet suit, followed by a NRS HydroSkin jacket, buff to keep my face warm, and a warm hat. Hands are a lost cause as they always get cold in the winter months.

My body never got cold but I wasn’t paddling in air temps that would make the water freeze.

I really hated the clammy wet skin after taking off the wet suit, and of course feet that were always wet. That was my biggest motivation to bite the bullet and get a dry suit with booties.

Still have the wet suit and use it in the pool.

Just keep that wetsuit clean and dry after use. Sweat in Neoprene can quickly become an odiferous mess.

Most divers learn to pee in them.
Sounds disgusting at first but do it a few times and you quickly learn to enjoy the temporary warmth.

Just keep that wetsuit clean and dry after use. Sweat in Neoprene can quickly become an odiferous mess.

If you decide to go with a wetsuit, make sure you get one with sealed seams. If you should happen to go in the water, water will flow through unsealed seams and pretty much make your wetsuit ineffective.

I rarely paddle when it is very cold, but I sometimes wear a full wetsuit with synthetic under garments. It’s always kept me warm and I have no idea whether it would be effective if I were to get wet. It might happen some day, but not very likely, because I am very particular when and where I paddle when it’s cold.

I went out a few days ago in 45 degree weather. My only issue was my pants getting a little wet.

Get a wetsuit that is fleece-lined. They keep you warmer I think when not wet. Top of the line NRS are fleece-lined.

I understand a wetsuit is intended to let water in to be warmed by the body.

This is a common misconception. A properly fitted wetsuit will allow almost no water intrusion. A wetsuit is warmest when it’s dry, but will keep you warm despite being wet, provided it fits well. Any water that intrudes requires body heat to warm it and more to keep it warm. Loose fitting wetsuits that allow considerable water flushing are nearly worthless in an immersion situation, as you’re constantly having to heat cold water.

Have you looked into a semi dry suit?

We have the NRS 2 piece wet suits and they cost brand new around $100 for each top and bottom so ~$200 for a set out the door. Wife eventually didn’t want to use it any more because getting into the boat in the cold getting her feet and legs wet is just miserable. She begged me for a semi dry suit like mine. I just picked up a reconditioned semi-dry suit, on “season end sale” from a local proshop with the gaskets and zippers replaced for the wife a month ago for $390.

My semi dry suit was the “previous year’s unsold” (due to its very large size I am quite tall) and I got mine for not that much more than that. Brand new, just sitting there for a year.

About 80% of the benefits of a full dry suit and 20% of the cost, time, aggravation, maintenance and upkeep. But you still almost never ever get wet. If you take a dip that bad and get wet enough to make a difference you’re close enough to shore in flatwater it doesn’t really matter. But it doesn’t leak as much as you think over the neck.

spend the $ and get a semi or full drysuit, yes, there are sales and deals but most importantly you’ll be warmer (safer) than with a wet suit and may actually enjoy winter paddling not just survive it. I still have some neoprene for the shoulder seasons but for true winter paddling I go drysuit or to a semidrysuit. I’ve got a couple of each (semidry/drysuit) and like the full suits better than my separate pants and top that mate up. Perhaps the only real disadvantage (besides cost) is the fact that drysuits are more prone to failure- gaskets blow out and need to be replaced, zippers degrade or can fail, and over time the fabric/ laminate degrades.

Cold water immersion is no joke. Stay safe, I’m basically a cheap-skate but this is one of those times where you want to spend the dinero. It’s not just about comfort but also survivability.

I used to think that as long as the water wasn’t hard, I could swim my way back, no matter what. When I made that comment in front of my sister, (a hospitalist in the twin cities…) She pulled me aside, and asked me how I thought I would be able to swim, if I was knocked unconscious? How would I be able to swim, if I had a heart attack?

After our talk, I changed my thinking. 60 degrees F and warmer, I wear a wetsuit… (unless its warm enough to spend a lot of time swimming, then I’ll go without) Colder than 60 degrees F, I wear my drysuit, with a neck gasket that covers my neck. If its windy, choppy, or if I plan to do some rolling, I also now wear a hood, which doubles up the layers on my neck.

Cold shock can, and has happened, at 59 deg F. The worst case scenario for cold shock, is cardiac arrest, regardless of how fit you are. To me, being knocked unconscious, or triggering a gasp reflex, when your upside down in a kayak, is no different than cardiac arrest… is it?

Edit to add: I used to think it was absurd when people would say to “dress for the crash, not for the ride” when I used to race motocross. Dressing for the crash, limits your freedom of movement, and makes me slower. The older I get, the more I re-think my mortality.

The problem with wetsuits is they are too warm for anything but submersion and I live in them for surfing and diving. I see them recommended for kayaking all the time and don’t really get it unless you’re surfing your boat.? You can get good splash gear (pants and jacket) for $300 as opposed to a dry suit for $700/1,400. Having said that nothing replaces a dry suit for extreme weather to stay warm and dry. Try Level Six for the best price or Stohlquist, Kokatat or NRS for quality and longevity. BTW the Stohlquist AMP dry suit is only $700 and is a great value.20190910_084409|690x388

I searched for the drysuit mentioned above and came across this one. Any feedback on this brand?

Thanks for all the advice! 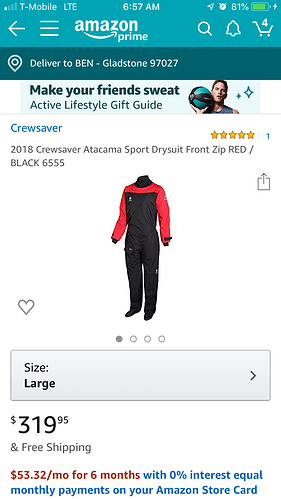