What Expedition Boat to Choose?

I’m curious and I have a question for kayakers who take long self-supported trips. I’m not talking about overnights, long weekends or even a week at a time. I’m talking about 2, 3, 4 weeks or longer. Let’s say that these are trips where you can’t go to the store to resupply. You can fish, though. For the sake of complicating things more let’s assume that this is a salt water trip and you can’t drink what you paddle in. Deck loading is not allowed though you can carry a spare paddle, chart case, float bag, pump and helmet. All drybags and kayak carts must be below deck. For the sake of this discussion deck bags are not allowed. 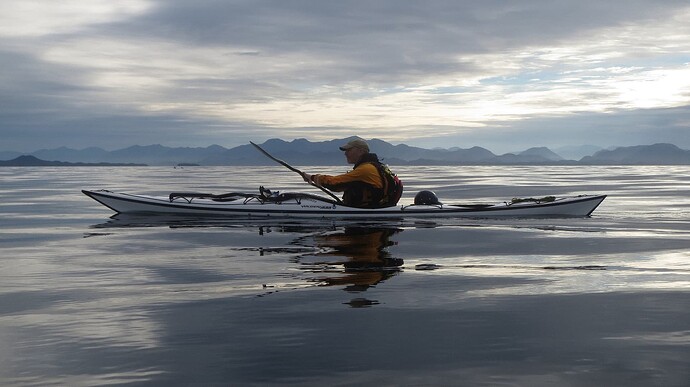 What I would like to know is what kayaks have you chosen for those trips and specifically why you did you choose them. What was really good about them and where did they suck. If your choice sucked and you could buy a different boat for the next trip what would it be?

This is not a discussion of rudders VS skegs, whether carts or drybags on decks are OK or can I substitute a bag for a helmet or “Why can’t I bring my deck bag”? For this discussion you just can’t, OK? No judgement. You just can’t.

I’ll go first:
I chose a Tempest 170 Pro 13 years ago because my Chatham 18 was unsuitable for my purposes and I could get a deal on the Tempest. I liked the way it paddled and it was an improvement over the C18. The secondary is broad and comfy. I can pack myself plus 130 pounds of gear below deck. I can go 3 kts all day long and it is very comfortable in sketchy water when loaded. It is a solidly built boat and takes a beating without breaking or getting cranky. The hatches are dry.

Compared to many other boats it feels kind of doggy to me, especially when loaded. It is a Heavy Mother. Don’t ask me to go much over 3 kts. I can do it but it hurts. The looseness in the bow that enhances turning disengages in following seas and can lead to a broach. Just something that I have to know about and stay ahead of. I wish that it tracked in following seas more like an Explorer but it doesn’t. IMO it turns more easily than an Explorer. A trade-off. It is a very good tool but I never choose to paddle it unless I’m going long

What about you? Please stick to the requirements in the first paragraph. Image attached for example of acceptable deck loading for this exercise.

I don’t do expeditions but I have the best boat to do a expedition in the CD Expedition.

Long, fast loaded, carries huge loads, large hatch openings to load, comfortable, rides dry, excellent in rough water especially with gear, and tracks excellent. Fast, oh wait I said that but it’s fast. It’s the fastest hull I have It’s 18’10" by 21.25" and 50 lb. in fiberglass they were available in kevlar also. 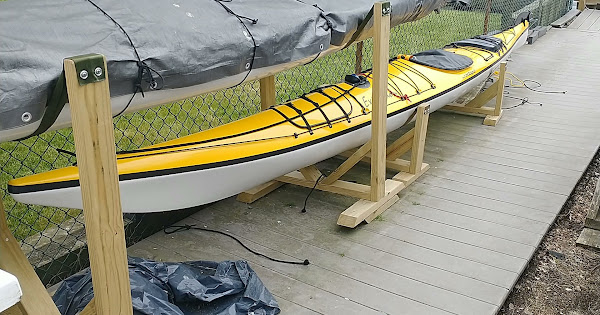 Paddled around Lake Superior 4 times (in consecutive years) - 1st in June '89 (cold), 2nd in July '90 (biting flys), 3rd in August '91 (nice), 4th in July '92 (plan was to finish in 21 days to make it in time for the symposium in Grand Marais. Just made it)
1st 2 times around in a Nordkapp HM (ocean cockpit, ‘fixed’ skeg - I used to joke that it took me the width of L Superior to turn the boat around). 2nd 2 year in the newer Nordapp with a large cockpit - large cockpit (for the 1st design) was AWFUL. No good bracing. Simple rolls ok, but would worry in a heavy storm.

After mastering my skill on the Great Lakes, I figured I could paddle ocean.
Having no experience in the ocean, I decided to paddle around Australia (I didn’t make it).

I went on 4 paddles up the east coast of Australia (Sydney to Cape York in '93,'06,'09; Syd-Mackay in '01).
The 1st time I had intended to paddle around Australia. I did the east coast and stopped at Cape York. On the 3 subsequent trips, the plan was just to paddle to the ‘top’ (Cape York).
1st time, I chose an ‘Arctic Raider’, a 'Nordkapp’ish kayak, designed (I was told at the time) by Paul Caffyn, since then have been told it was a Sisson design. Paddled well, bent the rudder several times (I carried a spare and would swap), scraped the shins a lot getting out of the ocean cockpit on surf landings. (What I didn’t learn on my Lake Superior ‘training’ was surf and tides - the coast out of Sydney up to where the Barrier Reef starts - many surf landings. Luckily I had a good roll. Did a lot of broaching.)
The 3 latter trips I used an NDK Explorer.

I chose the Explorer for ‘safety’. I know it is slower than many, but put me in any conditions (short of Hurricane (Cyclone)), and I’ll come out ok - from (lots of) experience.
I considered the skeg (taking up space in rear bulkhead) as a plus - it would force me to pack less, more efficiently (not overload kayak). I carried enough food to keep me going for a month. 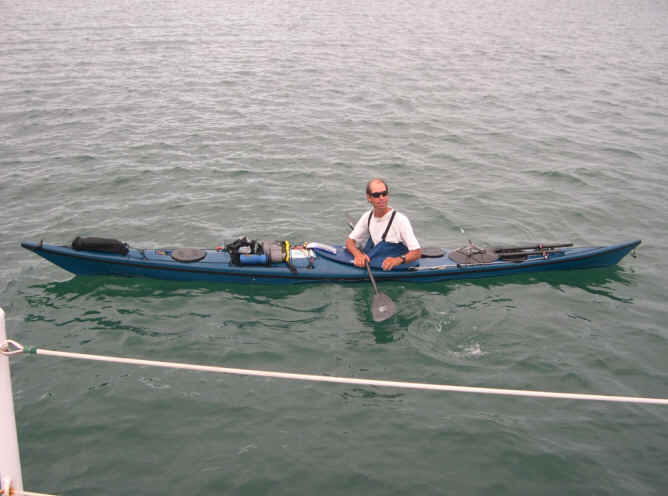 carried on deck:
bow: spare pump, shoes (in net bag)
forward of me: mesh net bag with misc items (yeah, pfd, so sue me). mesh deck bag would be emptied (stored in day hatch and pfd put on) prior to landing (surf). (got the idea of the mesh bag from Paul Caffyn)
rear deck: spare paddle

Last (long) trip was in '09. Shortly after returning, I was carrying something too heavy and my back went out (bad). Since then, I’ve added a short set of stretches every morning and a prescription of under 40lb kayaks (no more NDKs), and my back has been fine for years. I haven’t gone on any long trips since then, but paddle just about every day (as of now, 771 consecutive paddling days, last ‘off’ day was 9/4/19 - a day off for Hurricane Dorian to go by.

I have done 2 week solo in my Current Design Solstice GT HV (yellow boat in the picture, no pictures of the boat fully loaded, sorry). Lots of room for everything, although for a 2 week expedition you do need to be more minimalist.

The only things that would be on the deck are water bottle, chart, spare paddle, paddle float, and maybe a different jacket/layer depending on the weather.

Weighted down the boat is extremely stable and still very maneuverable but not fast. I wish I had the newer gas-pedal type of rudder controls. 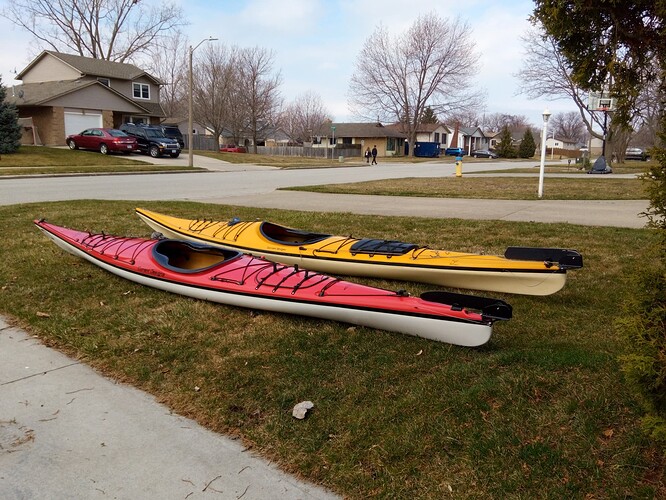 I’l have what Raisins is having. And, he can be my designated driver too.

Put the Sea-lect pedals in I’ve done it on 7 CD boats. 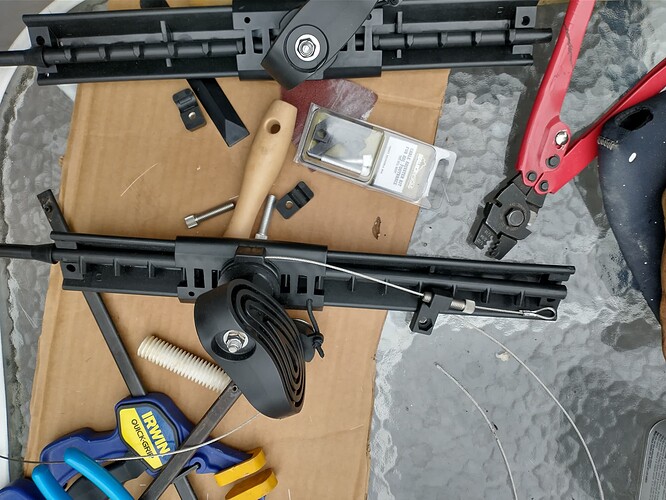 You can buy a whole kit from CD. I can walk you through the whole thing. Only special tool you need is swaging pliers in picture. Drop it off I’ll do it for free.

I’m not handy, but even I easily put Sea-Lect pedals into a Looksha IV.