What is the kayaking community's needs and issues currently

*Id like to see community storage racks where we can safely leave our kayaks all year and launch when weather permits!

I’d like to see community storage racks where we can safely store our kayaks all year, and be able to launch there when weather permits. We had this when I lived in NY at the Sebago Canoe Club. There were always members to paddle with and they even offered classes and practice sessions.

As a guy who never stopped working, I prefer you all to stay home also. It was about the best 6 months of commute ever.

And as another guy who never stopped working, the commutes were better in the height of the lockdown, but the tradeoff of the extra people outside isn’t worth it, to me.
There are some of my regular places that I never even went to this year due to all the people. My fear is that it could turn out just like when you have an easy back road to work, then construction forces everyone to go that way for a while and it’s discovered. Never the easy drive again. I’m hoping that people go back to spending time doing whatever it is that they used to do in town!!

Unfortunately, sandy beaches require maintenance as well, probably more than what a mechanical launch might. Depending on the location, they can quickly become a mess of driftwood and litter, and a storm can completely remove all the sand and replace it with 12" of muck.

If someone wants to build me the perfect kayak launch, just pour me a cement ramp and wrap astroturf around it.

When I was one of those younger people, we’d launch just about anywhere there was access. Steep banks, stairs, mud , cram the vehicle in the woods - no problem.
Maybe we’ve gotten soft, or something.

I’ve done some pretty interesting (hairy, scary, messy) launches as well. But I have to admit that, especially with folding boats, I’ll opt for a nice clean gentle slope into the water more often than not. I’m not partial to sand. I’d rather have small round stone. With sand half the beach ends up coming home with you regardless of your attempts to avoid it.

I’m fortunate to still be able to think of this as an ideal launch site: 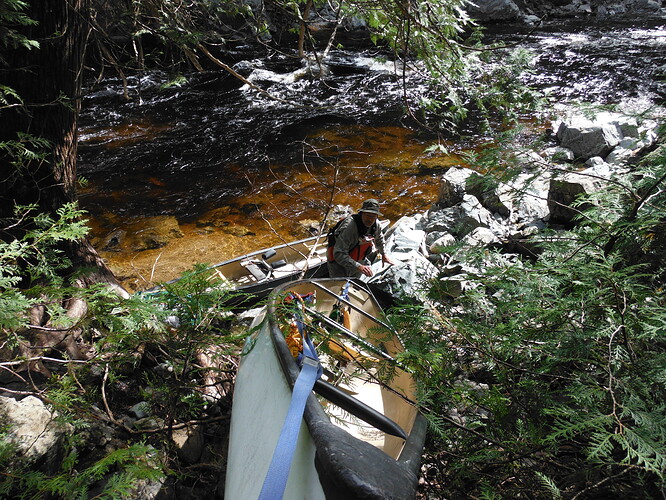 By the way, “First year college student”: you need a brush-up in grade-school English. The subject in your initial question is “needs and issues”, in other words, plural. So the correct grammar is “What ARE the kayaking community’s needs and issues?” You got it right in your second to last sentence, though.

First, river paddling: more river angels with chainsaws to clear a path thru fallen trees. This problem got a lot worse with emerald ash borer and for some reason hasn’t let up since.

Second, sea kayaking: the state of Michigan has safe harbors every 40 miles or so along the great lake shorelines for people with yachts. I would love to see something similar at least on Lake Superior for sea kayakers, a campground every 20 miles or so that people don’t have to stealth camp on private land.

woops, thanks willowleaf. I’ve never been too good at grammar. writing’s hard for me. especially MLA.

What we really need is education for the power boaters. Canoes, Kayaks ans SUPs have our rights on the water also. Most of them don’t even know the Coast Guard’s Inshore Rules. They act like we should get out of their way, while they are supposed to slow and yield right of way to all vessels of low power.

I need more kayaks and more time to use them

they are supposed to slow and yield right of way to all vessels of low power.

That’s a common nautical myth. A kayak, canoe, or other boat under oars is just considered another vessel according to the International Regulations for Preventing Collisions at Sea and the U.S. Inland Navigation Rules, their Annexes, and associated Federal regulations.

The only special treatment for boats under oars under a certain length involves required lights. While boats under sail are accorded special treatment in a number, but not all, circumstances, kayaks are not. In fact where a larger vessel is constrained by maneuverability, such as in a crowded marina, ability to change course or speed, or in a channel, the larger vessel takes precedence.

The overarching purpose of the navigation rules is to avoid collisions and all must do everything under their power to avoid this. The rules are long and very complex with many exceptions, but basically a kayak is treated the same as a motorized dinghy, cabin cruiser, or oil tanker.

The informal “Law of Tonnage” is a good thing to keep in mind. If you challenge a larger vessel, you may be right, but you may well not like the outcome. Bear in mind that in nautical accident investigations, it is rare that any one party is found to be wholly at fault. In most cases blame is apportioned among the involved parties.

Being a involved in kayak guiding and rentals. People wearing lifejackets wrong is a much bigger issue. They are counterproductive if they are not on tight. Its very common for first timers to simply buckle them up and think they are done.