What is this canoe's function?

Its a joke to make people laugh. It makes me uneasy to look at it.

(Patience, patience, Grasshopper. Your pure white Lady Bug will be on the way to you next week. And you will no longer be tempted by deformed purple goblins…) 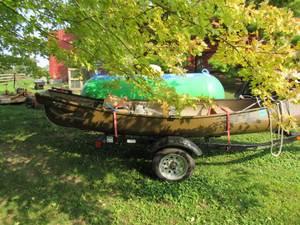 Don’t lie, you know you want one. You were just waiting on one in camo with a squared off stern!
Only $2,000.00 with motor and trailer included; a steal of a deal !!!
Ad states weight of boat is 65 lbs!
Only about 10 lbs less than my first canoe; an aluminum Grumman 17 footer.

I noticed that everyone pictured appeared to be in excellent condtion.
Think owners used theirs once or twice and decided that they should have test paddled them “before” they bought them???

P.S. I don’t think a whitewater paddler, or a freestyle paddler would need a canoe with a motor

I know that affliction all too well! And have the crowded basement to prove it.

I bought a horribly neglected 30 year old Aquaterra Chinook kayak for $75 many years ago. It had been stored in the yard of a cottage for ages, was so oilcanned it looked like Dumbo had used it for a footstool and had the worst UV damage I have ever seen – looked like if you breathed on it the shell would crack like a egg. But somebody had retrofitted it with what looked to be an expertly hand-crafted stainless steel rudder and pedal system in it that I planned to install in my then-new Easky (which had all the rudder and cable routing placements molded in). I hauled it to my boyfriend’s barn and it is probably still in the hayloft. Never did pull that rudder (decided the Easky did not need it anyway).

Actually, when I opined on here about the boat shortly after obtaining it, a gracious fellow p-commer sent me a Chinook bulkhead he had kicking around which we were able to install in the bow and brace up the worst of the oilcanning.

Far as I know the Chinook only was paddled once after I got it. The ex’s adult son has always had a big Memorial Day camp-out blow-out weekend for all his friends and old college buds in the lower field at his dad’s 40 acre country place directly along the Susquehanna River and the group of 20 to 30 always does a semi-sober flotilla downriver on one of the days. Though they reserve canoes and kayaks from a nearby outfitter to supplement the fleet that I and Dad could supply, they were short one year when a few latecomers showed up so we put one guy in the forlorn Chinook, which did manage the 6 hour trip without disintegrating. Since the river level was up (though still flat and shallow) it was more a float than a paddle.

Probably has raccoons or rat snakes living aboard now. I always said the ex’s pole barn was “the museum of past wives and girlfriend’s hobbies”. My immediate predecessor was into astronomy so there was a batch of high-end programmable telescopes (rarely used), the one before her was SCUBA, before that it was horses so there was a wall of tack, another was an antique hound so there were assorted half-restored relics like an Amish buggy. I didn’t ask about the motorcycles or cross country skis. My “contribution” was the canoes, kayaks and the little RV we co-owned and he kept. Add this to his personal hoard of a couple of dozen keyboard instruments ranging from upright pianos, a vintage (non working) spoon carved Victorian pedal organ and one whole pole barn extension stacked two deep with Hammond organs of assorted vintage (the B3’s and A100 live in his cluttered small “deer camp” house, along with a cluster of Leslie cabinets). At least he uses some of those – has been a professional musician on the side for 60 years. But he was an ER doc professionally and a second barn on the property is hoarded with all sorts of medical equipment, furniture and lighting that he snagged when a hospital where he had worked closed down and was demolished. Also a bunch of old tractors and farm gear that came with the property when he bought it 20 years ago. Since he had not shored up that sagging bank barn the last time I was there, it may have collapsed on the whole collection by now.

As I shared with his son one weekend “Gonna be a hell of an estate auction when the old coot kicks the bucket.” Junior just rolled his eyes.

I realize you are just trolling, so I choose to respond, for the benefit of all others who are not familiar with FS. With all due respect, you obviously know absolutely -0- about FS canoeing. It is about a skill set that can be applied to any canoe. FS is particularly useful to WW paddlers. There is no such thing as a FS canoe, although a FS paddler would never pick that boat out to paddle for any reason.

Perfect. Everything is good for something if we are creative enough.

I keep popping into this thread assuming that surely one of you knows something about this boat. Have there been mysteries like this in the past that were never answered?
For a second I thought carnival or amusement park ride, but no lap belts and there would be no reason for the drink holder. A lot of work went into fabricating it, but zero effort into the design (if it’s really meant to be paddled.) Maybe it’s a novelty display of some some sort? If it were a real boat, surely someone here would know something. 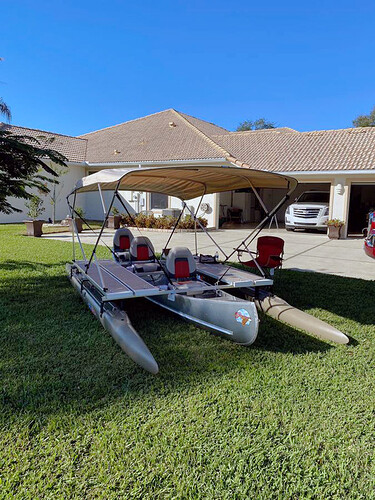 I think it is somebody’s homemade ww design. I think they were going for something like this: http://esquif.com/en/canoe/extasy/
admittedly the seat is a bit more centered-perhaps necessary for stability in a really short boat, imagine cutting off the decking on a taureau, http://www.eauxvives.org/img/uploads/petites-annonces/esquif_esquif-taureau.jpg and putting a bulge where the seam is. One thing I am sure of: the cup holder is for holding a can of pbr. I would have liked to have given it a go (knees and hips too shot to try now) I would want to see if I could drink a cold one and still keep the boat upright in current.

I’m a bit of a canoe snob but have also said, “Any boat is better than no boat.” Maybe I was wrong.

Another fruit-colored oddball canoe, this one a Wedco 12’ tandem, just offered for sale on my local CL for $100 (paddles included). Seems like it should have oversized Lego people with it. Per some vintage strings on the forums, Wedco is a Canadian maker known for making gasoline cans and these fine craft were sold at Walmart: 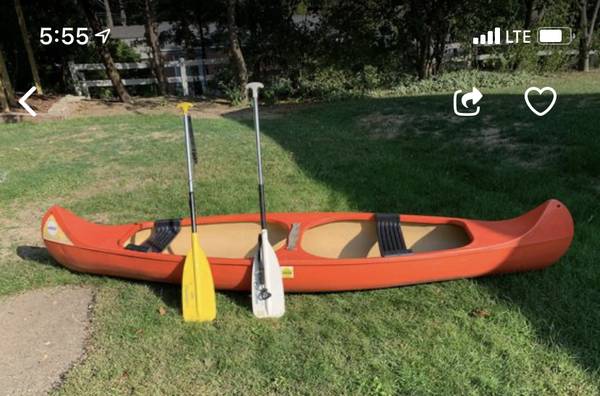 Perhaps more see the hole in the end. That appears to be a collision. The bulkhead up front appears to be not caulked/sealed to hull. The chine on the top picture has some discoloration.

White water…well it has run into things. Likely that…
Freestyle…wrong shape, wrong seat- it has one. Looks too short…
Novelty…there you go. Any way it is that.

It’s a strangely-appealing canoe as it appears to be in fine condition with a proper hull shape. Maybe a good boat for someone with a cottage on a pond (or their very own pond).

Seems to still be available if you’re interested. I admit I briefly considered getting it to use as a koi pond in the back yard. But, as with my long abandoned attempts at a vegetable garden, it would have just served as a buffet for raccoons.

Add a few turrets and you have a replica of the USS Maine.

I think you’d have to have a very vivid imagination to think that the addition of a couple of turrets would turn that pumpkin seek into a USS Maine replica.

I like weird things, I would at the least go look at it.

Bad news. The purple carnival canoe has sold. I did not buy it. Did one of you?