What is this deck line for? 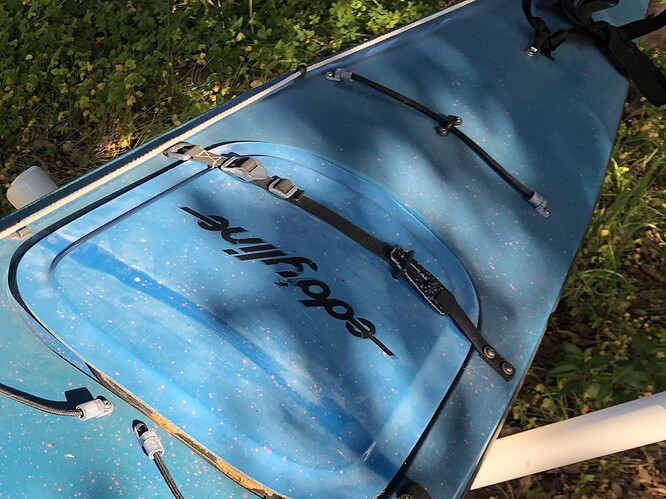 1996 Eddlyine Raven. Has a solo, short straight deck line on the rear deck. Curious, what is it for?

I would use it and the split line in front of that hatch to secure the two halves of my spare paddle.

You are missing a strap and anchor on the hatch. Given one lost the other might be needing replacement too due to condition.

I too think the single bungee is for spare paddle . “pipe” ends.

The second hatch strap and anchor are both there. You just can’t see them. thanks

Just for term clarification, deck lines are static (non-stretchy) lines, where the one you are asking about looks like it is a flexible bungee. We generally just cal those bungees.

Deck lines are used for people to hold on to the boat. Starting i the 90s or 00s, a perimeter deck line became standard on most kayaks. It is used as a safety measure - give you something to hold on to should you wet exit, and give rescuers something to use to help you drain and get back into your boat.

Bungees are used to hold things on to your kayak. They are made of a stretchy material, hence the name bungee. Spare paddles, pump, paddle float, drinks, etc. are all things which people use these to hold. The straight across one on your boat does look like it is made to hold a spare paddle.

You have one of the great sea kayaks every built. The Raven has a lot of rocker. It is not for everyone, but it is really easy to move around in rough seas.

Thanks, Peter. You are right, of course. I know the difference between the two, but used the wrong nomenclature. I stand humbly corrected.

Speaking of, I have been thinking about adding actual deck lines for safety purposes. But I can’t decide whether it is worth the effort.

You have one of the great sea kayaks every built. The Raven has a lot of rocker. It is not for everyone, but it is really easy to move around in rough seas.

I do like it quite a bit. It’s a beast to get through the narrow walkway out to my car. And almost as hard to get it on top of my car. But once on the water, it’s worth it. Hoping to use it to greatly increase my sea kayaking skills.