What is your engineering opinion of this guy's homemade boat-on-trailer rack?

A fellow on another forum group proudly posted his recent invention: attaching a pair of shop made
bars to a plastic cargo shell mounted on his small trailer. Maybe I am being a fussbudget but I have an uneasy feeling about the safety of this thing. Knowing that highway speed winds and collision forces have been known to rip entire racks off of metal vehicle roofs, I have a hard time believing that a rack attached to a plastic box this way is a viable hauling set up. Maybe somebody else is more familiar with the tensile strength of these clamshell suitcases and can reassure me that his “clever” invention is not going to land a kayak on somebody’s windshield, Maybe he has a 2 x 4 reinforcing the attachments inside the clamshell – he did not elaborate.

I confess I was similarly chagrinned when my brother built his own J-racks out of glued PVC pipe fittings and elbows attached to wooden slats and then held on his factory roof rack with u-bolts. Fortunately the car he was using that on died and he has a pickup truck now. 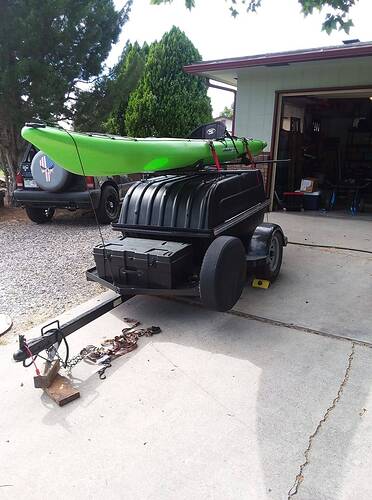 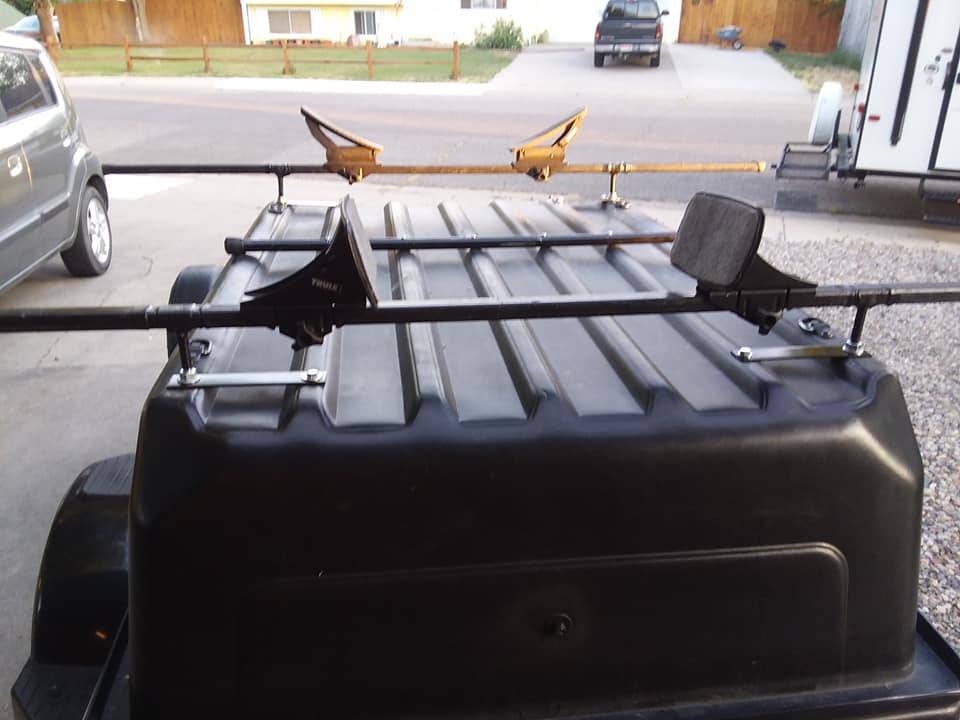 With the height of these bolts, inertial forces on the kayak will cause a considerable bending moment at the attachment points in the shell.

For inertial forces in the forward direction, there is absolutely nothing in that construction, which can take this moment. Unless he has a hidden longitudinal bar in each side below the shell. The pads on the kayak mount will stabilise a bit, but far from enough.

But even if he has a hidden bar, the bolts are in my opinion rather flimsy for this bending moment.

(“Flimsy” may not be an engineering term, but I am a mechanical engineer who have spent a lot of my earlier engineering life dimensioning parts, which were subject to bending moments. And I have learned the hard way how insane the stress from bending moments can be, compared to the stress from the rather innocent forces that caused those moments.)

I agree. Neither the lid, nor the box itself, was designed to withstand the forces that kayak will subject it to at speed.

It’s an accident waiting for a place to happen.

It looks like a nice neat job, but i wouldn’t comment with out seeing the under side attachments.
I did notice that he is not using double looped camlock buckle straps and his straps are just going to a ring bolted to the plastic top. if that ring just has a bolt attaching it to the plastic, I would never trust it, and I would want the proper straps
I used to carry two bikes on yakama towers and bars attached to the top of my pop-up campers’s aluminum cap but the landing pads were bolted through the support struts.
I went many thousands of miles at highway speeds

Seeing that he has the “punisher” logo in stars and stripes on his tow vehicle, I see no issue. As Jack mentions, I’d need to see what those bolts are thru-bolted through and whether that box has metal framework. The longitudinal integrity does look shaky as Allen mentions. The tow vehicle being rather high will create either a bit of a vacuum, downforce or buffeting at various speeds which is another unknown. I would possibly put the kayak upside down to help with the downforce, depending on airflow off the back of that suv.
I once forgot to strap my canoe down on my pickup truck racks, and drove home at up to 70 miles an hour without issue, about 15 miles. Downforce and the vacuum saved me that day.

I look at those little lateral metal bars bridging the ribs in the box, and I’m guessing he thought those would be adequate and that there are no other reinforcements under the lid. And there’s nothing connecting the front and rear support bars, let alone any kind of diagonal bracing. I’ll bet the box itself could be twisted quite a bit, too. One skinny bungee cord at each end.

I’m no M.E., but I agree with Allan; this is flimsy. I’ll say he’s flirting with disaster.

I am NOT an engineer.
But I do have a background in Advanced Swiftwater Rescue, Cave Rescue, and High Angle Rescue.
One thing I heard “repeatedly” when I was being trained was this; “any rescue system you rig is only as strong as the weakest link”.

I am of the opinion that the bungee cords attached to the bow and stern of the kayak are the weakest links in the system pictured. Some strong rope would certainly be a better alternative.
The plastic roof for the trailer is also a weak link. What would your guesstimate be on it’s thickness? Maybe 1/4 inch? Not good.
Having a metal or wooden beam running the full width of the trailer top, and underneath the trailer top, and having the anchors attached to both the top & the bottom beams would likely be much more secure.

Exposure to UV rays, over time, will degrade and weaken the roof on that trailer; if trailer is stored outdoors.
Plastic will likely become brittle over time.

Having cradles for bow & stern is good.
Having 2 NRS style tie down straps around the kayak is good.
But the cradles & the tie downs are attached to the racks, and again, their bomber security is suspect as they are attached to the roof,
I personally wouldn’t feel good about using that system; especially if strong winds/crosswinds were encountered

Just my NOT an engineer opinion,.

I think you’d have to look it over, see how stiff the lid is, and see if he added any reinforcements under the lid before deciding how safe it is. The plastic lid does not seem to be deforming at any of the fastener attachment points. I’d also wonder about the latch(es) on the side opposite the piano hinge.

Bungee cord and ratchet straps, the two things that should never be used to secure a kayak. A rack bolted to a plastic box.
JUST SAY NO!

Had not even noticed the straps and bungee. Ugh, even worse.

The rack builder is probably going to be pissed that i rained on his parade. He got all sorts of “attaboys” for building it when he posted on FB. I pointed out that he could be seriously liable for damages when (not if) this thing fails on the road.

I’m not an engineer, but work with them and often design and build things much better than them. I’m not trying to boast, this is simply the truth supported by plenty of evidence.

Plastic is way too … plastic (“bendy”) to use as the foundation for such a contraption. It fails quickly and catastrophically when subjected to loads beyond it’s tensile or shear strength. The cargo box idea in itself isn’t bad, but I’d be building some sort of steel, aluminum, or on a serious budget - wood frame to go inside or outside the plastic boxes. Your pictures didn’t show the inside, but it I saw very large metal reinforcing plates under each of the mounting points I’d be more comfortable with the design. At best, I can can guess that large “fender” washers may have been used, but I wouldn’t be confident in having only those on the inside.

I agree – If I had that trailer and box set up I would have built a channel strut frame enclosing and separate from the entire box, firmly attached to the trailer frame and well-braced. The I would install the boat cradles on that.

@willowleaf said:
I agree – If I had that trailer and box set up I would have built a channel strut frame enclosing and separate from the entire box, firmly attached to the trailer frame and well-braced. The I would install the boat cradles on that.

Me too. I would have built a frame from angle iron over the box and bolted it to the trailer frame.

This is the j-rack that my tinkering brother built for himself (to haul the 65 pound Necky Looksha 17 I gave him). Though the hardware design is clever, I had serious concerns about both the wooden component and the PVC. I was an industrial construction electrician and worked with a lot of PVC conduit. When we needed an oddball angle we would soften the pipe with a heat gun or simple hot box and it could be bent into shape like a wet noodle. I also know that PVC degrades in impact strength with UV exposure (I was the regional factory rep for Carlon PVC products for a couple of years and had to know all the specs.)

I was unhappy with my Bro’s contraption but I knew he would be upset if I dissed his creative efforts completely, so I just made some suggestions about being sure to attach the boat to the factory racks and use solid bow and stern lines. He did take the boat from Saratoga to Cape Cod at one point but usually he was only going about 35 miles on country roads. But I admit I was relieved when that car died and he now has pickup truck. I do have a spare Thule stacker that I will offer him if he ever has cause to think he needs those home made J-racks again. 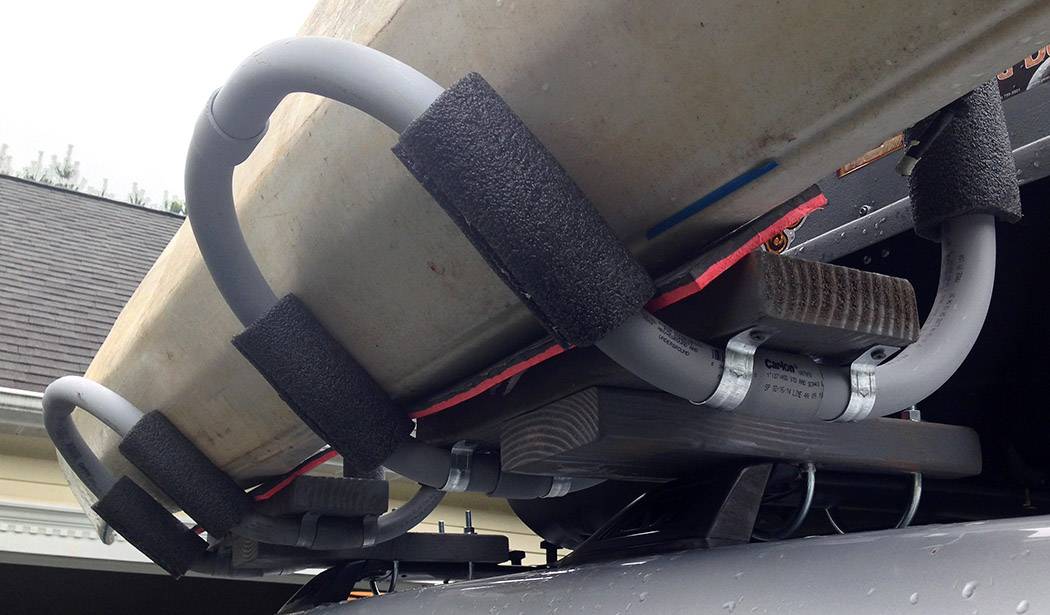