I currently have a 2015 F150 with a Leer Cap (love it!) and a Thule roof rack with aerobars. I am looking to get another canoe and will need to be able to carry 2 canoes. A new set of aerobars and I should be good to go.

Question I had is what is the suggested size of new bars? How wide to go? The widest load would be two canoes.

At least 8 inches wider than the 2 boats combined if possible.

A place to start is rackattack.com. I have 60" bars on my p/u and can carry a canoe and 2 kayaks. One is in J racks.
The first question is what is the combined width of the canoes at the widest point?

A little difficult as I don’t have the second canoe just yet! I currently have a Discovery 164 and something along the lines of a Discovery 169 or a Penobscot is likely. Spec says 37" wide so 74" of canoe to cover.

The bars don’t need to be wider than the canoes, just wider than where the canoes rest on them. Just something to keep in mind when measuring

I have 78" bars for hauling two boats, and roughly 50" bars (plus a set of whisbars that are narrower) when carrying one

You want extra room on each bar on each side for safe tie down and some shifting during travel and some gap between boats.

No arguement there. But canoes can narrow significantly where they sit on bars, so the width of the canoe (assuming we are talking about the rated width, which is at its widest point).

Wider won’t hurt, just saying it might not be necessary

I use two 2x6’s that are 7 feet long. I reinforced the ends with metal strips screwed into the sides of each end to prevent the wood from breaking from the pressure caused by the strap tie downs. For canoes with the widths you are talking about, 84 inches is needed to accommodate the canoes (without them rubbing together in the middle) and provide space to keep the tie downs on the ends of each extension.

No way is that necessary. It may work, but far from needed

84" cross bars are overkill for even really wide boats. You aren’t tying anything down at the widest part and even a really wide boat is generally under 40" at its widest

Quite right about the widest boats being 40 inches. I used the 84 inches as the widest you would ever need. But two 40 inch beams would be about 82 inches wide leaving space between the canoes in the middle. That puts the canoes one inch from each end. Since my straps are 1 inch wide, that means they would be sittng at the very edge of each board. That is not overkill for 40 inch boats. However, If you are hauling 36" or 35" wide boats, 76" is wide enough. Use the boat sizes you are hauling to make that judgment!

But it doesn’t put them one inch from the end. You don’t strap them down at their widest, usually. Their width at the widest only matters if that is where they rest on the crossbars

Get the widest road legal bars you can get, and you’ll have the flexibility to carry 2 canoes, and possibly more.

Am I the only one here who has found themselves in a situation where they needed to shuttle a third boat?

Right. Tuning to the exact width of your boats is not the best approach. Widest bars you can stand.

Most has been 4 canoes on a shuttle. That was on whitewater runs. No pictures of 4 up but here is three up on the Liberty: 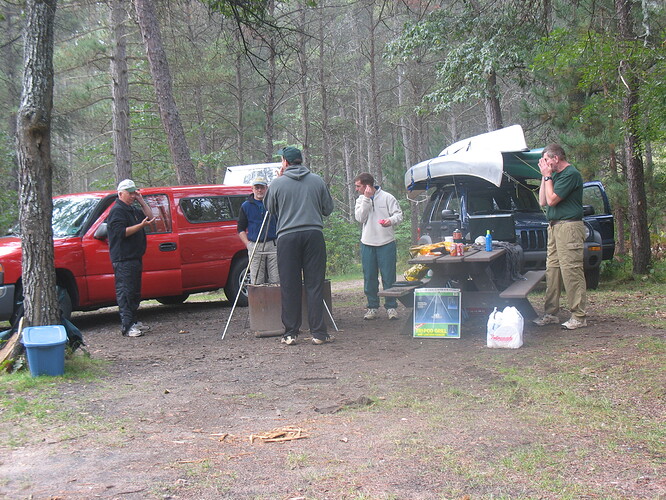