What stroke is this?

He appears to lean far back while executing it. Taken at The Gales 2017 on Lake Superior. 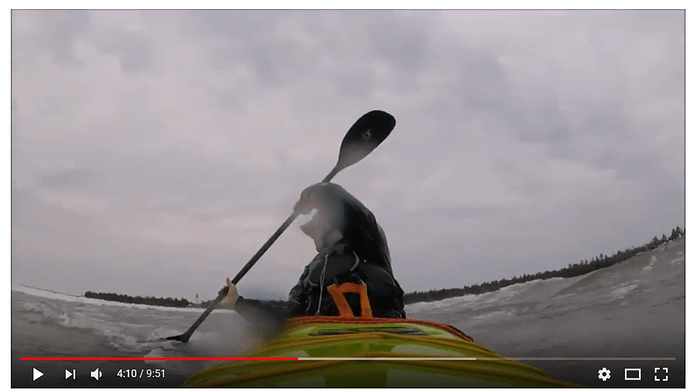 stern rudder stroke, also used in ww, I did notice the application is surfing, “facing the work”, shoulders square to the paddle side, leaning forward or back would help control the pearling of the bow- much prettier in the video than I can do in a ww kayak

Thanks. First time I’ve seen a stern rudder with the top hand so high.

@Rookie said:
Thanks. First time I’ve seen a stern rudder with the top hand so high.

Even worse: His elbow is high which is completely unnecessary. That is a direct invitation for a dislocated shoulder.

He could have his top hand in the same position with his elbow tucked at his belly or chest. That would protect his shoulder joint much more.

I have got the advice that you should never have elbow and hand in a high position at the same time. Having one of them high is fine, as long as you keep the other below shoulder height. So in a low brace you can have your elbows high, but you keep your hands down. And in a high brace, you can have your hand high, as long as you keep your elbow down (and quickly let go of the paddle if the wave has enough force to lift your elbow).

The low angle stern rudder shown in the film is more common.

If you watched the film to near end you saw a T-rescue quickly done. Note the use of the deck line. It is more difficult if the boat does not have that line.

To me, and I’m not an expert, looks like a low brace blended into a reverse sweep, or almost a pivot turn if such a thing exists in a sea kayak. You see him lean into the wave and low brace with the boat parallel to the wave, then he blends that low brace into a reverse sweep to spin the bow of the boat, using momentum to push the stern backwards to help turn the boat out. His blade is sweeping from back near his hips and finishes sweeping up to his knees, a short boxy powerful sweep to get a bit of lift off it, and the paddle is high to add power. He then takes a couple of hard sweeps on the opposite side to keep propelling the boat forward and back out of the surf zone, he’s already got it pointed straight out by the time the next wave breaks over his bow. He never looses momentum through the whole sequence, looks like an A paddler to me.

Ran the video at .50 and .25 speed and saw those sweeps mentioned above. Slow speed is interesting and revealing. Figures he’d be an “A” as that event is for the advanced paddler and hires only ACA L5 coaches.

@Rookie said:
Ran the video at .50 and .25 speed and saw those sweeps mentioned above. Slow speed is interesting and revealing. Figures he’d be an “A” as that event is for the advanced paddler and hires only ACA L5 coaches.

Watch enough “high end” paddlers do their thing when they think no one’s looking and there are plenty of bad habits to be noticed. It’s only when they’re demonstrating “the perfect way to do it” that they get it pretty close to what they’re professing.

The exception is probably racers, who by the nature of the sport need to keep up perfect form for the duration of the race. I’m betting even they drop into a more relaxing stroke when they’re paddling around for pleasure.

Guess there aren’t many WW slalom types on this thread. Duffek stroke, and a fairly conservative one compared to some of the crazy contortions racers wind themselves up into. 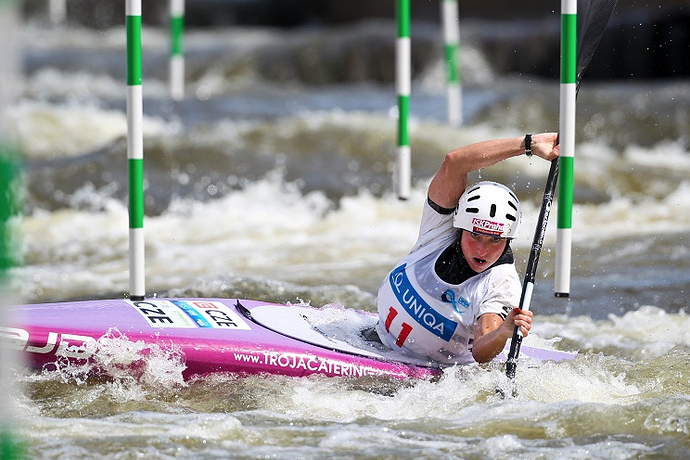 see I don’t think it’s a duffek because of application , unlike the slalom racer (in the last photo) the sea kayaker probably doesn’t have a low volume stern and probably isn’t initiating something as radical as a pivot turn in the rear of the boat, which would fit well with the duffek (in the last example) but I’m just not so sure about that in in a sea kayak… To me it just seemed to be someone caught in an awkward position ( hands higher than normal) executing a stern rudder. When I watched the video that kind of solidified my thinking when I saw all the stern ruddering… But if I really think about it even more then I wonder how different a duffek is from a stern rudder- both require a moving boat, torso rotation, are attempts to turn the boat or course correct.

I think its hard to know exactly what’s going on from a still image, video way more informative. I just hope whenever my own picture is taken that my paddle is in the water and not caught between strokes and heaven forbid if it shows me gunnel grabbing - those photos will never see the light of day.

I started paddling a number of years ago, before many of the ‘labels’ have been applied to paddle strokes (though, many more are quite old, eg: duffek).
I like, I think it is a 'Cliff Jacobson’ism: you paddle in the direction you want to go.
If you follow that, you may not have the most efficient stroke, but you will get there.
Watch the youtube’s or take lessons if you want to get the most efficient stroke (and you’ll learn a lot of paddle-stroke names).

Watching it several times in slow mo, looks like he’s just moving from a low brace into a compound turning stroke - start with a stern pry, slice forward, and rotate the blade to finish with a bow draw. Very common stroke in longer solo canoes, and it works decently with longer K boats, too. Short WW boats turn well without needing that sort of coaxing, but you’ll still see people do it in squirrelly stuff just to keep an active blade in the water while getting back into position to do a forward stroke.

Pivot turns are different - they use a reverse sweep combined with dropping the upstream edge to slice the stern under the incoming water. A Duffek is basically just a hanging bow rudder. The effect is a lot like grabbing a parking meter as you walk past it on a sidewalk. Can’t imagine it’s very useful with a sea kayak, since they turn very differently from a WW boat, but the stroke is legit and safe.

You can give yourself impingement from repeatedly doing Duffeks, especially the way a lot of racers do them (forearm/wrist of top hand actually behind the head!), but it’s not a dislocation risk the way a poor high brace is. Being overly aggressive with a stroke like that actually puts way more strain on the lower arm. Top hand is basically just controlling the blade angle - all of the turning force is tranmitted through the bottom hand.

Now that I think about the bio mechanics, it’s the lower arm/shoulder that is at risk with a bad high brace, too.