What to use to touch up scraped black seam tape on composite kayak?

OK, I’ve searched the archives and haven’t found a clear answer for this. I’m committed at this point to restoring this sparkly fade vintage composite Perception Avatar – Topkayaker (bless them!) actually had the few parts it needs including the neoprene inner hatch covers and the Immersion Research seat back ratchet clamps. I’ve perused multiple videos on doing the gel coat repairs on the two chipped areas. But I am coming up empty on what to use to touch up the black tape where it has been scuffed at a few points along the seam. I realize it is mostly aesthetic but I want it to look good.

Could I use black self adhesive ripstop repair tape? I recall we patched my friends’ gelcoat FG canoe’s keel some 40 years ago when a rock in Tionesta Creek took a chunk out it by using a wad of chewing gum to fill in the deep gouge and then sealing it with a 4" square of day-glo orange ripstop repair tape stretched over the area (we were on an overnight trip and used what we had.) That “temporary” repair stayed on that canoe for years, sticking out like a thumb on the deep green hull but enduring very well on multiple outings.

I actually really like the flexseal idea, but for an actual tape I personally would go to my local Ace hardware store and tell them what you are after and the type of use it will see.
Must be a million kinds of adhesive tape out there and Ace or a local hardware store is far more likely to have someone that actually knows what they are talking about than a box store.

Flex seal I have used and it is a really good sealant product but doesn’t have a lot of wear resistance. I like the idea of cleaning up any rough edges where the tape has been abraded and then the marine paint to make it look good.

It all depends on the extent of a showpiece you are going for. If the plan is to get it in the water and use it along with not looking beat up go for the cosmetics.

I know a guy that waxes the bottom of his show hotrod and if he is driving it to a car show and it happens to rain he turns around goes home and will spend 8-10 hours under the car cleaning and waxing. I think he is insane and would never treat anything like that but on the other hand I like things to look nice.

How about using black Tenacious Tape?

On most composite kayaks the black seam “tape” is actually gelcoat. Wouldn’t be too hard to tape off and re-gelcoat the whole seam. Be sure to use the gelcoat that will cure without being covered.

Add some graphite powder to epoxy and brush it on. Will yield a glossy black finish like this skid plate. 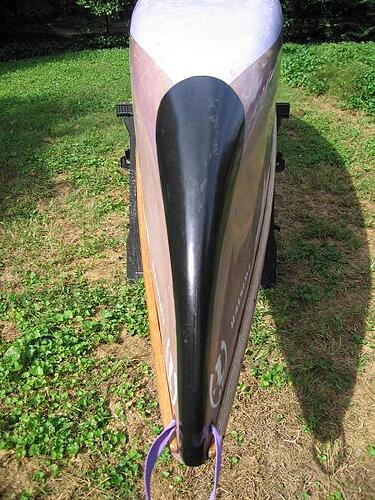 Gelcoat will look best. There are two other options that look OK, but not perfect.

Hmmm, many suggestions. This kayak clearly has some sort of tape, not gelcoat. Maybe fiberglass. Looking through the catalog archives, it seems like Perception trended away from making composite boats during the mid 2000’s so maybe they were not using the techniques then that are common currently.

I have progressed from simply wanting to salvage this boat for functional utility to restoring it, since it really is quite a pretty boat. And perhaps a collector’s item. (though as boats go I fear I may be gradually crossing the line from “collection” to “hoarding”). The cobalt blue and bright yellow “fade” deck has metal flake inclusions that sparkle, the skeg operates perfectly, it has a slick Immersion Research seat, tight bulkeads and nice little features like a welded in deck fitting for securing a cable lock. I will have to figure out how the Keepers footpegs adjust - that was not obvious when I futzed with them today.

I have heard reports that this was a fast and playful boat (from a few folks who had the RM version). though the factory weight for this composite version was listed as 50 pounds it felt a bit lighter to me when I took it off the roof rack and shouldered it. Got out the scale today and, sure enough, it is barely 45 pounds. Pretty freakin’ light for a fully outfitted 16’ hardshell sea kayak.

I wish I could find a handy Ace Hardware! The two not far from me I used to patronize most frequently succumbed to big box competition and rising rents in strip malls in the past few years. There are only 3 left in the entire county and all in very remote locations for me. Bums me out – not only were they better stocked and had more informed personnel than Big L and Big HD (and you could actually FIND someone to help you), but their prices on common supplies were better. I might try Tractor Supply – ironically, though I live near the urban core there is one of those nearer to me than the Ace franchises. They sometimes have a better selection of some hardware than one would expect for a farm supply franchise.

There could be a whole random string on the increasing rarity of good hardware stores and lumberyards. When I lived in Grand Rapids, Michigan, I was 3 short blocks from the best family indie hardware store I have ever known, and happy to see they are still in business. This place is one twentieth the size of a big box but never failed to have every thing that I needed. I gutted and renovated a 100 year old house during the years I lived there – never could have done it without these guys. If they did not have exactly what I needed (rare) they would find it for me. They managed to survive the invasion of the Big Boxes by opening two specialty departments, one with gas and electric fireplace inserts and a much larger one with home hardware like drawer and cabinet pulls and fancy door locks and bath fittings (they claim to be the largest such showroom in the Midwest and I believe them). They share a parking lot with the largest kitchen and bath remodeling contractor and showroom in the area which draws in those customers to select the bits and pieces for those projects.

Sad to see your local ACE hardware gobbled up by the big guys.
That’s why I always do my best to shop as local as possible.
Like you say, we could go on and on about the benefit of the local stores vs. the box stores or other huge chains, but that would be its own lengthy thread.
I shop ACE whenever I can. Sometimes they are competitive on prices, sometimes there is money to be saved at the box store but always in the big picture there is more value in supporting the locally owned business.

The tape over the seam on all of my sea kayaks is some form of actual tape. That is so for four boats of various manufacturers. Granted under it is other stuff.

It generally seems to be a somewhat rubberized material. On a quick look no luck at finding it though.

I may try the self-bonding stretchy black electrical sealant tape. I used to use it in the field to protect and weatherproof splices and it has worked wonderfully for patching rubber garden hoses. Cheap to try it and it has a low gloss finish, like the existing black stripe on this boat.

I just did a more careful exam of the seam and found a place near the deck scrape where the tape has lifted away about an inch and I was finally able to see the substrate: it’s a woven white fiberglass strip with a black painted-on coating. I’ll need to get some two part epoxy to re-adhere the loose bit over the seam joint. Think I may experiment with a little bit of black FlexSeal to touch up some scuffed bits and see how it looks (already have a can of the stuff anyway.)

That makes the most sense. The seam on my Vela is pretty stiff compared to the tape on the NDK boats. Differently made up fiberglass weaves would create that kind of variation.

Some of them are FG tape coated with gel coat.
When ordered new you could specify the color.
Think Valley…

I have a old kevlar kayak I plan on restoring. Same situation- the tape is in bad shape. This was what I was thinking of using. I haven’t bought any yet so can’t confirm it will work but it seems to be the best replacement.

It is probably fiberglass tape with vinyl ester or polyester resin, then after that is on it’s taped and coated with gel coat mixed with black dye and micro balloons …holds the deck to the hull

Post a picture it may be plastic H channel.