What Was Your First Kayak or Canoe?

I came across this photo showing the day I bought my first kayak in March of 1999. It’s the gray Old Town Loon 100 on my Escort station wagon. The shop is in Youngstown, Ohio and I also found the receipt for $364.95 plus tax (cheap paddle included). Amazingly, I still have the kayak but have been through 20+ additional kayaks since. The fleet now includes several touring kayaks up to 18 feet, carbon, Kevlar, fiberglass, stitch-and-glue and plastic. Like others, the addiction started innocently enough. Who knew what the little 10 foot Loon would eventually lead too?

Does anyone else remember what boat started it all for them? 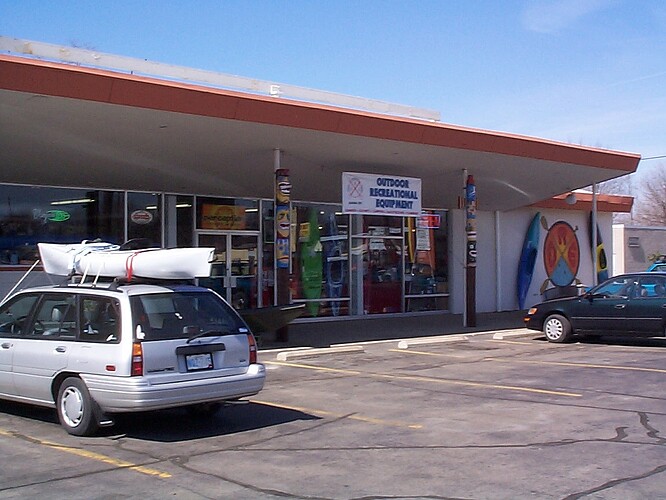 Then for some reason in 1989 the boat procurement took off. The Grumman was too slow and heavy for Quetico trips and we got a Sawyer 190 canoe.

The same year I went to the Newport Boat show… and came home with a Keowee… I was so happy I didn’t need anyone else to help me carry or transport it and I could go out whenever I wanted.

15’ Ocean Trident Prowler SOT bought a week after renting on or near 4th of July 2008 or 9. And then

Wilderness Systems Tsunami 145. Laughably too large for me but the bug bit me anyway!

In 1995 bought a used Necky Looksha 17’ with paddle & skirt. Learned to paddle that beast as it had neither a rudder nor skeg. The back combing seemed to come up to my shoulders, but somehow I learned to roll it (very poorly) while wearing a nylon sprayskirt and bouncing around inside the inverted cockpit. A tight fit from individualized outfitting was not part of our NE Florida repertoire in those days.

Edit: wish I still had that boat. Sold it 10 years later for the same price I bought it, $600, Though for some reason I kept the Aquabound Navigator 240 cm one piece paddle with 90 deg offset - I use that paddle once every couple years just for nostalgia.

The Grumman was too slow and heavy for Quetico trips and we got a Sawyer 190 canoe.

on getting to MN ('83), I thought I had to buy a canoe (you know, all those lakes), and did (Dolphin Princess, then a Wenonah Advantage, a year later)
in '86 got a Chinook (kayak) so I could (safely) explore Lake Superior.
Though, per your comment, I found that I could run many of the rocky (light) rapids in the BWCA/Quetico with the Chinook that I would have portaged in the Advantage (though, overall, the Advantage was a better BWCA boat)

Bought twin Wilderness System Cape Hatteras kayaks in 1999 for my wife and me. We had a great time in those boats and hauled them all over the place. Many boats have come and gone since then but they really were good starter boats for an ambitious couple who didn’t know anything.

For me, it was a 1962 or ‘63 Grumman 18’ canoe factory finished in red over a flat pea soup green salt water primer with battleship gray inside. I got it the late 80s as a hand-me down from my father who bought it new in Connecticut. It developed a unique “patina” (

) over the years as the red faded away. I sold it a few years ago to a gent from the Westport, NY area … just just too difficult to car-top, especially on a higher profile vehicle in any kind of breeze. Like others, I’ve had several kayaks since then (and have kept a few of them). Now, as if to complete the circle, I’ve acquired another canoe (Northstar Magic), but the Grumman will always be first.

Wenonah Jensen 18’ custom ordered through a TV shop in Ann Arbor in 1978. Talked a friend into going in with me. An excellent canoe for learning how to paddle positively on Michigan rivers.

My first was a Grumman 17 std in '67 for $180. I had the unfortunate experience of living in a city in the mid 70’s and it was stolen from under the porch of the place I then lived. Replaced it in '78 ($400). I still have that one and still use it occasionally. My first solo was a Blackhawk Starship in '94.

Feel free Aventura 125. I just started this year and really enjoy quiet waters (as can be found) in West Central Texas.

A bright yellow Sawyer tandem canoe. Bought in Hopewell Virginia and used to paddle the James River and the New.
Sold it in Houston and built a Folbot Super.

It was a Cape Horn 15 with a rudder. I vaguely remember selling it to a co-worker. It was a very good beginner boat.

First kayak was an early 1990 Perception 9.5 ft Swifty. Still own, but unused. Many boats before, but it was the most influential of all because it taught me the independence and potential of kayaking.

In 1980, I bought a Sawyer Cruiser for $25 at a sidewalk sale. It had been wrapped and both sides were torn out of it. I had built sailboats before, and decided to put it back together. It was very strong and a little heavier than when it was new. I painted the outside green and inside light grey with auto primer. I paddled the boat for years on all kinds of trips and sold it for $400 in about 2000. 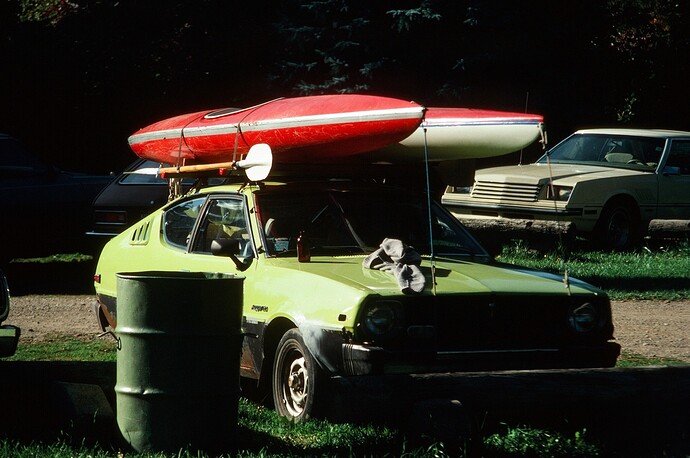 I briefly owned an Alumacraft 15’ double ender tandem around 1980. Took it for a couple of trips up into the Boundary Waters Canoe Area and Quetico Provincial Park, decided I wanted something better, and sold it back to its prior owner.

I tried taking the Traveler down some Class II technical whitewater streams in east Tennessee with mixed success. After pinning it on a technical Class II stream in Spring high water I decided this straight-keeled boat was not ideally suited for whitewater paddling. The first dedicated solo whitewater canoe I owned (actually I was half owner having invested $75 dollars for a 50% share in the boat) was an absolutely beat-to-hell Royalex Blue Hole Sunburst II, previously owned by Carrie Ashton who said it had “taken one too many trips down the Tiny Piney” in east Tennessee.

The first Royalex tandem canoe I owned that was suitable for whitewater use was a Dagger Legend 16 which I sold to a friend.

First kayak I owned was a plastic whitewater model, a Dagger Crossfire, which I bought at a canoe club auction. Paddled that boat for several years before I decided the cockpit was too small and the stern too low volume for my size.

Bet you don’t still have the Plymouth Arrow!

My first was an Oscoda 16’ canoe in 1987ish. My first kayak was an Aquaterra Sea Lion in 1990. My second canoe which I still have was built from cedar strips in 1993. My second kayak (which I also still have and use for teaching and guiding) is a 2000 NDK Romany.

First boat paddled would be an old beat to shit leaky aluminum canoe (going by internet pictures I think it might’ve been an Osagian). First owned was a Perception Carolina 14.5’ with a rudder that I got rid of after a season as I didn’t like it.
Since then (in order): Old Town Vapor 10, Necky Rip 12, Dagger Sojourn, Old Town Tripper, Necky Looska IV, Wilderness Systems Arctic Hawk. All still owned, but some will be getting culled come summer.

Still wishing I could’ve struck a deal on the early 2000’s Old Town Castine I went to look at and test paddled before buying the Carolina. I loved the way that boat felt leaning it off center. Something I could never say for the Carolina.