My new thought is when do you decide rolling for self rescue is your best option?

If you are floating a stream with lots of debris, roots, and somewhat shallow, is it a good idea to roll? Is there a chance your body will get caught on these obstacles when rolling? I know it’s meant to be a quick recovery when you capsize, but do most of you who roll frequently analyze if the stream you are in is meant for rolling?

Growing up in the Ozarks, most of the streams were shallow, swift, filled with trees, roots and rocks. The idea of rolling never seemed applicable to us because we could just stand after a capsize and pull our boat to shore. Now that I don’t live in the Ozarks, but in central Missouri, the Missouri River is my go to place to float. It’s quite a bit deeper than our Ozark streams, but I would guess it has 10x more debris in it. I have no clue what is just under the surface causing the bubbling, swirling and misdirection of the water on this river because the muddy water keeps that from view, but it’s not uncommon to see a few full sized trees lodged in the middle of the water way.

On a float such as this, is it best to roll your way out of a capsize with the danger of catching yourself on some debris, or should you float with your feet upstream drag your boat to shore? I’ve attached some examples from our trips below.

For all of you that have commented on my previous roll threads, thanks for your input and helping me understand the basics of the roll. 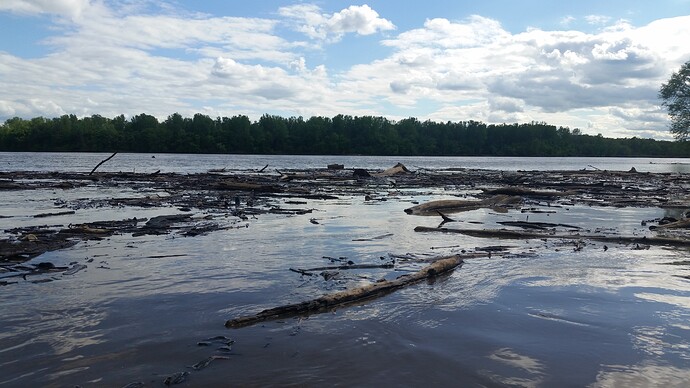 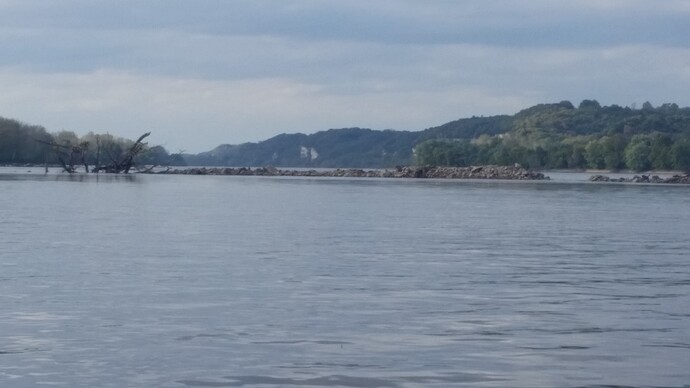 Well, at that point you’re already upside down, so if debris is going to snag you up you’re already screwed. Theory is less time in the water and out of your boat the better,

@RLL said:
Well, at that point you’re already upside down, so if debris is going to snag you up you’re already screwed. Theory is less time in the water and out of your boat the better,

True, but I would think falling out the side at the surface of the water would be much different than completely upside down while rolling. I’m probably over thinking this, but when I capsize currently (without skirt) I just fall out the side close to the surface and float with the boat back to safety.

I never even thought how much space below you that is needed for paddle sweep as well when rolling, or if debris would effect that?

If the water is moving fast enough to knock you over I think rolling up quickly is the smartest thing to do. I agree that the longer you’re swimming the odds go up that you snag on something and get held under. My whitewater paddling neighbor saw this happen some years back. He had to help pull the body out of the water. A paddler in his group blew several roll attempts, swam, then snagged on a root ball and drowned.

Typically I roll after a brace attempts have failed. From the post, it appears to me the question is posed as “should I turn to avoid an obstacle or roll”. If the case, I would suggest work to avoid being placed in situation to roll. Learn to stay loose and upright. However by all means, learn to roll on both sides under a variety of circumstances. I found once I got a reliable roll, I was far less concerned about “what if?” and tended to stay upright with greater confidence.

Once you learn how to roll you will have the answer to your own question. A roll is just a different kind of brace that brings you back upright. The best rolling methods are those that are part of a bracing motion. If you are rolling properly your body will be compressed against the boat to be as shallow in the water as possible to avoid hitting your face, head or back on objects on the bottom and to decrease the rotational inertia for a roll. A roll becomes muscle memory…when you tip over you use rotational momentum to bring yourself back up, just by moving the paddle to brace, a little hip and torso rotation. After you have some experience in moving water, the set up, sweep, recovery steps become one fluid motion like executing a turn on skis. You are always much, much safer inside your kayak than you are outside of your kayak. The only exception is in a pin, and you won’t be rolling in that case.

I can’t think of any time when I would not want to roll up if I am able. Wet exit always takes longer and brings new/different dangers into it.

There are times when you may want to delay a roll to wait for something to pass. But those would be times where you hang upside down until you can roll up.

it is good your thinking about this. Your safer upright and not flipping over at all. There are a few times I’ve “abandoned ship” when the boat was upright but that’s pretty unusual- pins, sieves, climbing up on a strainer etc. As somebody who regularly paddles shallow and rocky places with fast current, staying upright is very important and the key to not getting hurt. If I do have to roll I want it to do it quickly. As important as rolling is you want to really kiss the front deck and protect the head.

I suffered a shoulder dislocation after flipping in the base of a small falls when I impacted a rock while being upside down. I’ve flipped in that same drop since then and elected to bail out and swim rather than attempt to hang out and or trying to roll up while still in the base of the drop. Generally though your better off rolling rather than swimming.

If you can roll, then roll. The gators won’t get you when you’re not in the water.

@Overstreet said:
If you can roll, then roll. The gators won’t get you when you’re not in the water.

Haha, I don’t have those here thank goodness.

Thanks for the input everyone, this helped me see that the roll is pretty much instinct once you capsize and the quickest way to recovery. I’ll be taking a class in the spring for sure.

More importantly is that you apply what you learned during practice to prevent you from needing to roll. The hip snap (ie. moving the boat under your butt so that you have a more stable platform) isn’t only used in the roll, but whenever the boat nears the tipping point (such as when broached on a wave). I paddle in the ocean and worry little about submerged objects, but in moving water, I can imagine that the presence of a snag, rocks, and depth of water could impact the decision of whether to roll.

I doubt it is possible to choose roll/wet exit as the “right” option when, say, approaching a snag since much of what puts you at risk is below the surface of turbulent water and difficult to see. Other situations may present much clearer options.