Where can I find more information on our canoe?

This Canoe has been in our family for a long time, some good canoeing camping trips and memories were made. But it’s time for it to move on to new adventures. I’m having difficulty pricing this canoe. It’s a 16’ Blue Hole. We have always stored it in a garage/shed/covered area. The ?tabs? are from Arizona in 1990 so it’s at least that old. Any where I can get more details on this canoe? Or do you have a suggested asking price for something like this? 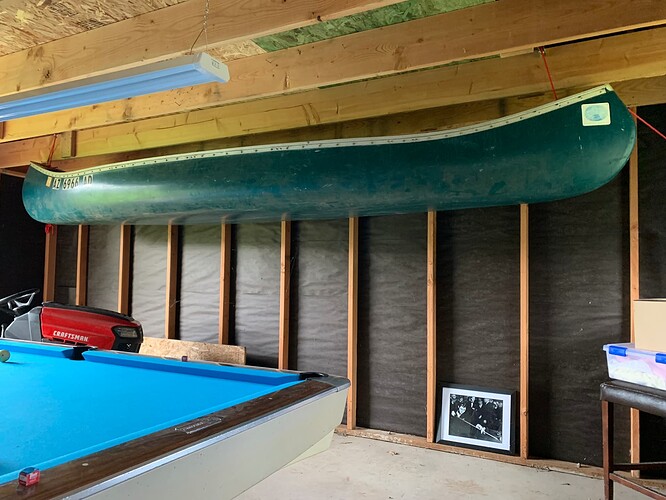 Ok, I’ll take a stab at it and say that it is worth around 500 bucks assuming there are no major issues with it. I have bought and sold several similar canoes for around that price over the years. But, it is a very thin market and you may wait a while for a buyer to show up.

Thank you! There are no issues with it other then needing a good wipe down. Its a good canoe, unfortunately I just don’t see us using it.

It looks like the 15’ 9" Blue Hole OCA model which was Blue Hole’s first in-house design. It was one of the very earliest tandem Royalex whitewater canoes. Still a capable whitewater tandem and whitewater river tripping boat.

It is heavy and built like a tank. I agree with Peter that it should be worth at least $500 to somebody in today’s market, possibly more. But you might need to wait some time to find a buyer as many people are just not prepared to deal with canoes that heavy these days.

Maybe a silly question… how do you properly measure a canoe? We just measured it on the outside as it hung there. It was 16’ with that measurement.

Properly measured, length overall (LOA) is from on extreme end of the canoe to the other, in other words, the length of the shortest box that the boat would fit into and sit flat. For a boat with recurved stems like that one, a measurement taken from the tip of one deck plate to the tip of the other would be significantly shorter than LOA.

Before Blue Hole introduced the OCA in 1975 they sold around 175 Royalex tandem canoes built on the generic “Warsaw Rocket” hulls which were purchased directly from Uniroyal Corporation. Other manufacturers including Perception, Mad River, and Shenandoah also bought and finished these same hulls. I don’t know the exact LOA of the Warsaw Rocket hulls but they are said to be 16 footers. The OCA is also frequently referred to as a 16 foot tandem even though it is actually a few inches shorter in LOA. It is conceivable that your boat is one of the early Blue Hole Warsaw Rocket boats but I don’t think so.

Blue Hole produced other Royalex tandems but they were all longer than 16’ I believe. The Starburst, which that boat definitely is not, was 16’ 6" and there was the 17’ 6" MGA and MGB.

If you measured correctly and the boat is definitely longer than 16 feet it could be a comparatively rare OCA-17 which looked very similar in profile to the OCA but had 18" added to the middle and was a bit longer than 17’ in LOA. It may be the perspective at which that photo was taken but the canoe does have an elongated appearance compared to an OCA.

Blue Hole usually etched the model number and their proprietary serial number on a brass plate riveted to the bow deck plate. Check and see if there is one and whether it reads “OCA-17” or possibly “17-A”.

Thank you! I found the brass plate! Didn’t even know it was there 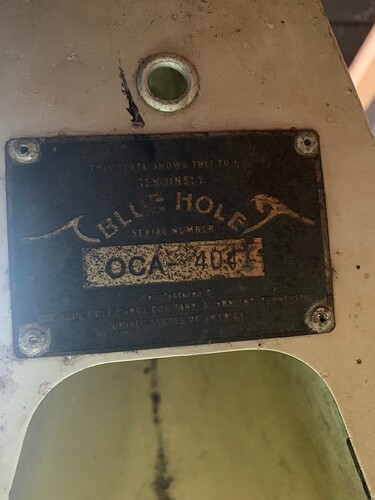 OK, then it is an OCA model, the first model designed by Blue Hole Canoe Company and far and away their most popular tandem model.

Okay great! So this is a 16ft OCA Royalex whitewater canoe? From what I’m understanding? I looked for a HIN number but I could not see one with it hanging. And it’s too hard for me to lower by myself at 7mo pregnant…

I looked for the model number online and came up with nothing. Like it doesn’t even exist. Here are more photos… I assume the blue padding on the bottom is for whitewater canoeing so you can kneel down and not kill your knees? 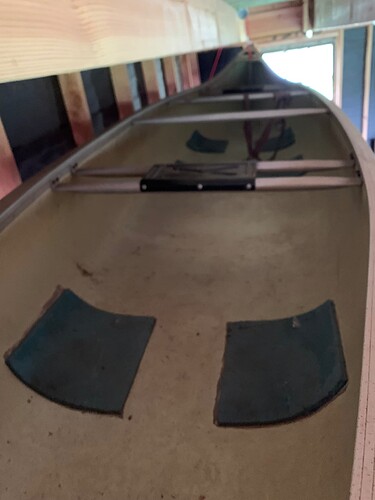 The numbers on the brass plate have absolutely nothing to do with the HIN and since Blue Hole no longer exists and has not for years, nobody is going to be able to give you any further information about them.

The HIN should be located on the starboard side of the hull at the stern. Sometimes it is on an aluminum plate riveted to the hull, sometimes embossed into the Royalex. If you don’t find anything on the hull exterior, look inside the hull below the stern deck plate. Sometimes an HIN will be written there with an indelible marker.

The model is an OCA. The only additional information you will get from the HIN is the month and year of build and certification with the US Coast Guard. Yes, the foam pads are there to make kneeling more comfortable.

I really, really appreciate you sharing your knowledge! I guess I have what I need, hopefully I can find the HIN # when we get it down.

I did find the HIN number and it’s from 1979. Sad to see her go as I have many good memories with it. We have a buyer coming any minute now. Thanks again pblanc!