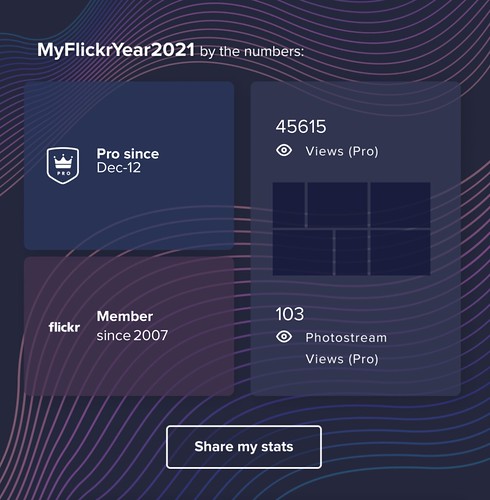 It got me remembering the old days on P-net when the picture sharing site Webshots would rank their top 100 members. There were a bunch of P-net member that were high up in the rankings, and a competition to be at the top of the list. I seem to remember falling somewhere in the middle. I went back to the archive and looked for the posts, but couldn’t them.

Looks like I moved to Flickr in the middle of 2012 when Webshots shut down. I still have a couple of zip files with all my Webshots pictures. Unfortunately they are no longer in the original folders, but someday maybe I’ll go back and try to organize them - maybe.

Facebook and iCloud have pretty much put the picture sharing sites out of business. Hopefully Flickr will stick around. I do like having all my pictures in one place.

I remember them very well, especially how they screwed over all their users by suddenly deciding to eliminate photo albums entirely. Fortunately, I managed to save both the images and text from mine (many of them were tutorials), though I haven’t re-posted most of them anywhere. The few that I have re-posted are on my personal website, where I have control over them. Lesson learned, no more commercial photo sites for me.

Yup… Lost all of my photos. Was a mistake to not keep copies.

I always have copies of my pics stored elsewhere, so I didn’t lose any. The biggest issue for me was losing all of the work I’d put into creating 34 tutorials and annotated albums over several years, many of which were heavily viewed. I can recreate them all, but it’s a lot of work and I just haven’t done it.

Yes I lost a lot of work I had put into uploading the pictures and making trip reports and albums etc for my kids and friends. I have copies on an old hard drive but my wife lost the power cord and cables that fit the drive, and they don’t seem to be common types. Of the pictures I have, the resolution is very low from early digital cameras and scanning for the internet. Here are two old videos I uploaded to youtube a long time ago. They greatly compress the older files so now the sound and digital image quality is even worse than when they were taken.

I really loved watch (and envying) your west coast surf paddling sessions! Now, while I still enjoy watching, I mostly envy that you all get more waves than we do in New England.

It’s been a pretty good winter for surf in California. I tend to go on the smaller days since I don’t want to need a trip to the ER. I have pretty much given up on taking surf videos and photographs. Too much trouble fooling with the Gopro or camera. I’d rather just enjoy the moment. And with gopro I always end up with a water drip over the lens, just for the best shots.

Check out surfing videos for Blacks Beach in San Diego and Ocean Beach in SF, and Rincon on youtube. There have been some pretty decent waves this year. Somewhere I saw a poster on Pnet complaining that the Pacific has just been flat for two years. I am wondering if he is on the same planet.

Right… The surf up by the Bay Area was crazy to watch. I love watching the folks surfing that crazy wave just inside the Bay, on the edge of the Presidio and in the afternoon shadow of the SF Bridge. Of course, y’all got that 2’ tsunamic wave… LOL!

I did read and wondered about that post lamenting Pacific “flatness.” Maybe, it was a BIG WAVE surfer…?!? Speaking of, some videos of folks at Hawaiian Pipeline were showing major carnage. The caption was “Would you paddle out?” A resounding, NO!!!, for me.

I remember them very well, especially how they screwed over all their users by suddenly deciding to eliminate photo albums entirely. Fortunately, I managed to save both the images and text from mine (many of them were tutorials), though I haven’t re-posted most of them anywhere. The few that I have re-posted are on my personal website, where I have control over them. Lesson learned, no more commercial photo sites for me.

I have three huge zip files with all the pictures - they did let you save them, but there are no folders and the pictures aren’t in any particular order. Still glad I have them because my old computer crashed and I lost a lot of those pictures.

I have all the pictures on my computer, and back them up now on an external drive, but it is just an unmanageable number. Nice to have all the best edited pictures online in one place.

Why did Webshots shut down - I don’t remember.

I had some backups in my old tower computer. But, the computer died.

As much as it is a pain to shoot and edit video, at least what’s loaded on YouTube continues to be available.

Webshots, oh yeah, I had lots of photos on webshots. When they shut down I downloaded all of them. Still have them on a separate hard drive. Had over 750k views.

With all my travels, and an Android phone, I have photos posted on Google maps and have had 3.7 million views.

Webshots didn’t actually shut down; they just switched to providing desktop wallpaper and screen savers, and ditched the personal albums.

FWIW, I’ve been backing up my computers using Carbonite for a long time. It’s worth it to never have to worry about losing important files.