I keep seeing posts about folks who want or need lighter boats. I made the comment that boat makers need to address this and cater to this niche. Someone replied that I could build my own very light kayak for not much money. Hold it! If an individual in their garage can do this why can’t a smooth running factory do it? Are these light weight kayaks too fragile? Why doesn’t a manufacturer sell a skin-on-frame or something in that weight range? Or does one and I’m not aware of it? Inquiring minds…

Lightweight boats like my Perception Carolina and my German Pionier fol-boat are easy to carry because they are so light, BUT, the Carolina is light because the plastic is so thin that it oilcans easily. The Pionier is light because it is canvas over a wood frame and dropping it shattered two struts and a frame brace.
I can drop my old Coleman Canoe, my older OT Dirago or my CD Whistler all day and they will survive.

There are light and tough boats. Expect to drop several grand… Savage River makes a kayak at six grand and some 34 lbs ( I paddled it but don’t remember the exact weight) Its the Falcon. Retails for six big ones.
Kayaks have to have decks which adds weight
There are pack canoes ( essentially deckless kayaks) that come in from 12-23 lbs. The 23 lb ones are not fragile… Cant speak for the 12 lber.

I think you can build your own lightweight kayak cheaply because you value your labour at a much lower rate than a manufacturer would have to pay its workers.

And they have to make a profit to stay in business.

I suspect some of it is marketing. Yes it is great to list the low weight on the brochure, and picking one up is sweet. Dealing with dissatisfied customers who don’t realize the constructions limitations is not so enjoyable. I am on my 4th composite boat. For the first time I felt like they might make me sign a liability waver… You can have 2 of the 3-strong, light, and economical.

First boat was crushed in shipping. I repaired the glass and it has been a very strong 40lb boat, but it is smaller and has no bulkheads. Boat #2 was a super strong surf ski, it weighed way too much. I rarely paddled it due to its weight. #3 was a 21lb competition boat (strong, but not river and rock strong, plus -0- cargo room due to foam bracing. Boat 4 is 32lb, but being a canoe feels weakest of all. I fully expect I am going to eventually bust the hell out of this boat, but that is the cost of needing a light, rigid boat for a rough race.

I don’t agree with the third sentence at all… Makers of lightweight strong craft build for the customer. They are custom boats. Small builders who will build to meet your expectations. Most have NO dealer network… Talk to Joe Moore before you speak further. He is the principal at Placid Boat works. PBW also builds shells for Olympic sleds.

A common engineering trick is to design in some holes to reduce weight where they won’t weaken the structure.

@Sparky961 said:
A common engineering trick is to design in some holes to reduce weight where they won’t weaken the structure.

“Lighting holes” is how they show up on the documents.

As long as you have the $$$, you can have as light a boat as you want. I know that I couldn’t build those beauties in my garage.

That’s a fact. I have built 2 kayaks from kits, 2 canoes and one SOF from plans and though very functional, the aesthetics weren’t there.
The nicest kayak I have seen from a kit was strip built. The guy who did it is a designing jeweler. It was as close to perfection as a home built can get.
Most of us don’t have molds and vacuum bag equipment.

You might like to look at www.cnckayaks.com and https://www.facebook.com/CNCKayaks for Shrike (S&G) and Vember (strip). Four thousand copies of the free plans have been downloaded in the past three years.The website has a Gallery of many of the completed kayaks. You can vary the dimensions, cockpit, deck height etc, to suit your needs.
Nick, of CNC kayaks.

Here ya go: It’s cheap and it’s light. And if you can’t lift or afford it, get out of the sport!;-
https://www.youtube.com/watch?v=20qVV7Nqb6w

Lightening holes. Sounds like nomex honeycomb core. Great for weight, not so good for bouncing off rocks. Really bad for repairing after bouncing off rocks. I think my 32lb 17’ canoe is mostly single skin, but has cored (not sure of material) reinforcing strips. Looking at a new sea kayak from a surf ski company, they use it on hulls, but warn not to be used on rivers. Also read about soric, and was aware of some other cores from the past.

Light, strong and reasonably priced is already available: skin on frame kayaks. I have an 18’ x 21" West Greenland replica very similar to this Shaman Designs model with the same 8 ounce ballistic nylon with 2-part urethane coating (green boat in the middle of the photo, taken at Qajaq Training Camp last month). It weighs 31 pounds (you can see how easily the guy in the video hoists his with one hand.) Mine cost the original owner $1200 to have custom made 10 years ago – I bought it used for $800 and have heavily used it for 8 years. It has scraped across gravel bars, bounced off underwater rebar and fallen off my car in the parking lot, still unscathed. I think they are beautiful and fun to paddle. There are people who make them for around $2000 or, for about $1500 you can take a week long class and build your own OR for under $500, just build one solo in your basement or garage using common tools. Takes 40 to 60 hours depending on your competence with hand tools and level of obsessive pickiness. Put it this way: every other Saturday through the Winter. 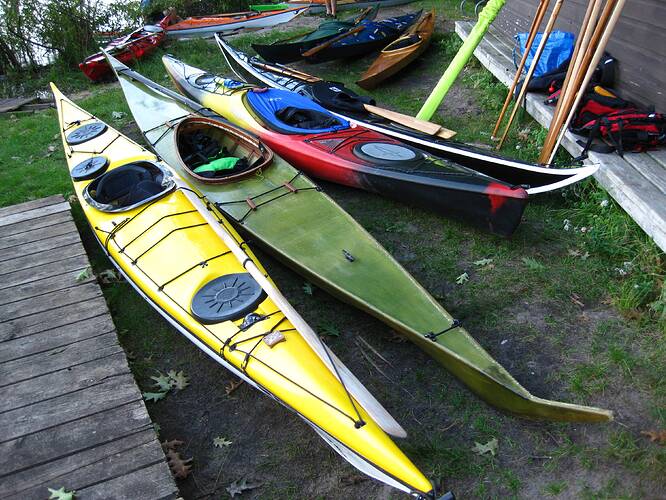 As to “why are these not commercially manufactured”? They are, by small builders. Like most handcrafted items, they would not translate well to mass production assembly line (though the contest teams at QTC build 3 rough frame 12’ versions during the 90 minute competition which were marginally seaworthy when Saran-wrapped.) And to an extent they are available in the form of folding kayaks, though the demise of Feathercraft and Folbot last year considerably shrank the market options. 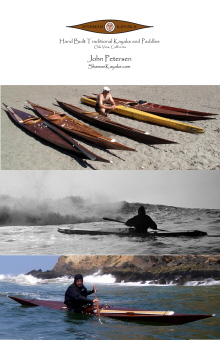 Hey Willowleaf: Thanks for the great information. I’m clicking and searching and it looks like Shaman Kayaks doesn’t exist in the internets anymore. Some questions if you don’t mind… I notice there’s no skeg on the SOF design. How does the boat behave in the wind? There are no hatch covers so I assume there are no bulkheads and inflatable flotation is needed front and back, right?

Actually, my SOF has a skeg “bump” built into the keel and it tracks like an arrow. It was designed by the original Greenlander to be a hunting kayak, so it needed to continue to glide straight towards the seal or other prey after the hunter drops his paddle and picks up his rifle or harpoon. Because the boat is so low profile (the stern deck especially is barely above water) it is not much affected by wind. Here is the Harvey Golden dimensional survey drawing of the boat that mine was based on. You can see that skeg bump on the far right, under the stern, and how low the rear deck is.

There are other builders around the country that still make SOF’s to order. The best source for information on SOF’s is builder and designer Brian Schulz’s old and new websites. This is the old one, jam-packed with information and link to his new blog and site:

Unfortunately, due to some serious health problems in the past few years, Brian is no longer able to build boats to order like he used to but he still schedules some building classes around the country and has links to others who build and teach. here are some other makers and information sites:

And Tom Yost’s design site with free plans for skin on frame, folding and inflatable kayaks:

Most SOF’s have no bulkheads so you do need to pack the stern and bow cavities with inflatable float bags or packed drybags – you can also use a sea sock (which I describe as a lower body condom) that minimizes water getting into the hull through the cockpit. But sea socks are hot in warm weather and make getting in and out a hassle. Float bags are simple and you just get in the habit of stuffing them in and blowing them up. Since my first sea kayak 15 years ago was a skin on frame folder, I have always had them as part of the routine of kayaking and it doesn’t bother me.