Winch or quick pulley options for bridges around difficult places.

There a river fork near me that has sooo many good runs. Unfortunately, most of the put in and take out points are difficult at best, dangerous at worse. There is a bridge at each point though and I was thinking about getting a winch and/or pulley system where we could pull the yaks straight up to the bridge(and drop down from the bridge). I was thinking something similar to the WARN 885005 that you could hook to the bridge guard rail, but I would have to figure out something to deal with the length. Included length for this particular winch is 15’. I might possibly find something similar with enough room to spool up 50’ of a thinner gauge wire or rope since the weight would be much less than it’s normal usage, if you know of something let me know…

So hopefully someone can help me out with some idea of how to pull these yaks up to the bridge…? I thought about a truck mounted lift, but I don’t think it would be safe, or legal, on some of these country roads to park my truck on the bridge. Possibly a truck mounted solution where I’m parked off the side of the bridge, not on it, then use a loop that would be attached to a bridge point , then pull the yaks up to the bridge…

If someone has anyone has had to deal with this type of thing before, or has any suggestions, I would be grateful for them.

What happens when you get to the end and find out something isn’t working? Dead battery, forgotten/misplaced hardware, jammed/kinked line, vandalism. The list gets pretty long if you want to be creative, and I didn’t yet include the most likely: general mechanical failure.

I have to admit I’ve considered this idea for some difficult spots too. But I always end up setting it aside in favour of more practical and safer options. I believe everyone should make a considerable effort to avoid needing to be rescued; especially as a result of something silly.

My first thought is that you are over-thinking this. I assume that you are able to get to the edge of the river on foot, so you can climb into your boat at the water’s edge. That being the case, would it be out of the question to slide the boat down that same path and lower it into the water by hand at the place where you would step into it? Two people could do the boat-hauling if there’s an especially difficult path or if it’s at a place where for some reason dragging is too hard on the boat (I don’t see many people with plastic kayaks who are opposed to dragging, and on a steep incline, friction and wear from dragging are much less than on level ground).

Spending a couple-hundred bucks on a winch that can handle 1,000 pounds, just to lift a boat that weighs 60 or 70 pounds (probably less if these are whitewater boats) seems like the wrong approach. Even with the winch, you’ll still have to get the boat over the bridge rail and the first several feet down (to be below the winch) by hand. You could buy a single pulley at any hardware store for a few bucks, attach that to your boat, and pulling a rope by hand, effectively cut your lifting force in half. You’d need a bit more than twice as much rope as the height of the lift, and again, that will cost just a few bucks.

I have to think that there will be places where lowering the boat from the bridge will not put it where it needs to be (where you yourself can access the water) so that it remains out of reach, but taking it with you down the embankment will always get it there.

Interesting take on it, @Guideboatguy . I was making the assumption they’d be lowering/raising both people and boats but upon second reading that isn’t made clear. Hopefully the OP can answer this question.

Winching a boat up or down from a bridge is not a good idea, there’s just too many things to go wrong, as GBG and Sparky point out. If you can get to the water’s edge, I would look into getting a boat that’s light/small enough to carry in.

@Sparky961 said:
Interesting take on it, @Guideboatguy . I was making the assumption they’d be lowering/raising both people and boats but upon second reading that isn’t made clear. Hopefully the OP can answer this question.

Sparky, your comment reminds me of the brave souls who discovered Devil’s Well in southern Missouri. Talk about poor access and danger!

There ya go. Just have to rig the kayak like a bosun’s chair.

Seriously - a good climbing rope with block and tackle would be more practical than a truck mounted winch.

@Sparky961, @Guideboatguy is correct, not people just the boats. You are probably correct that there will be some places that putting it down from the bridge won’t get where I need to be, I hadn’t thought about that. I do know in some of the places it would be just right though. The problem we have with taking them down is that there usually isn’t a direct path. In some places we’re dealing with thick brush. In one spot in particular, the incline is so steep, that you have to walk with your hands and feet up the hill holing a rope attached to the yak. Then every so often pull the yak up to you and get it pinned in a spot where won’t slide back down as you make the next part of the walk/crawl. It’s a fantastic fishing run, but getting the boats to the truck is horribly exhausting. At another point, you have to walk up or down a pretty steep ~50ft cliff side. The ledge you walk up on is perfectly safe for walking, but again, with the boats it’s tedious. I agree with you on the cost, especially if leaving the winch with the trucks, I think a pulley is probably the better route for points where you can drop it to where it needs to go. My concern there is the rope slipping, but I know rock climbers have something that let’s them lock in their rope as they scale upwards. I’ll
look into something to handle that concern.

@carldelo, My current boat is a heritage featherlite and weighs in at about 38lbs. Not sure how much my gear adds…

Thanks for the great thoughts!!

Bet the state DOT would vote “no”.

@Guideboatguy said:
Sparky, your comment reminds me of the brave souls who discovered Devil’s Well in southern Missouri. Talk about poor access and danger!

Yeesh… Cleithrophobia keeps me out of places like that!

I can just imagine the first exploration: “Hey Billy, there’s a gall-darn bigass hole here, dangit. Let’s you and me fetch some rope and see what kind of treasure we can rastle up”.

…and they probably found some, but didn’t tell anyone.

you need a short ww beater boat and beater paddle. For the put in you can tie a throw rope to the boat and let it go. It will stop when it gets tangled up in brush, hits a tree, or topples over. Just make sure no one is below when you let the boat go. If you’re lucky it will go all the way to the bottom before crashing into a tree. Use the beater paddle to help you scramble down and start stuffing the throwbag as you make your way down the bank. For the take out it helps if you have someone who is younger and more nimble than you go first. They can toss down a throw rope for the boat and you can guide it up. What you do on your own is scramble up a bit with the beater paddle and throw rope in hand (with one end tied to boat), then sit down and pull the boat to that spot and keep repeating until you reach the top where you vow to never take out there again. Holes from briars in drysuits, ripped booties, dented boats, that’s just part of it. Be sure however to avoid any deer carcass or dirty diaper . That will ruin your day.

A friend and I we’re paddling a creek where we had to go under a small bridge. A very dead deer was trapped in a strainer that was blocking the creek. No way around.
You are correct. It was not pleasant.

Soemtimes a couple of straps or a rope work: 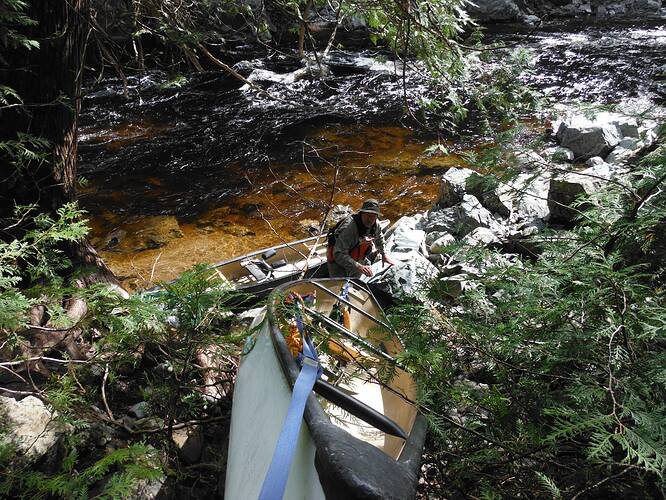