Hi there,
not too long ago on a paddle where our journey was from A to B. The wind was from the indicated direction and was picking up, F3/ F4. we chose the red route which was calm & wind free.

At point X, the wind was such that we could barely make progress.

My question is , if we had taken the blue route , and kept away from the tip of the cape, would the wind have been less ‘concentrated’ and easier to paddle in? thanks 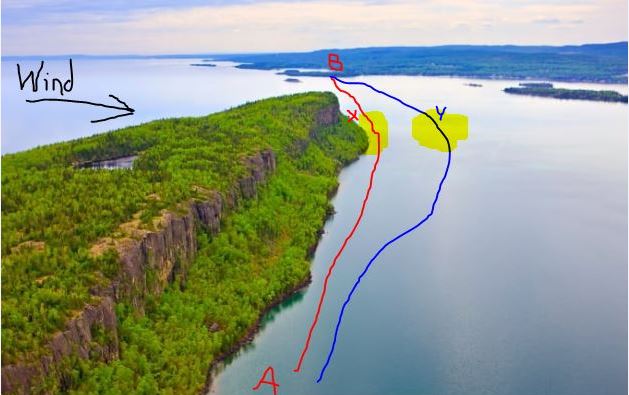 Winds probably would have been less at point Y than point X, but you would have had stronger beam winds and waves at other points on the blue track the further you moved out from the wind shadow of the land mass. At point X the wind is likely curling around the point and becoming more concentrated.

My guess is the main influence of those palisades would be from the wind going over the top and maybe reversing back toward the shore a little along the surface. There would be some funneling around the tip but not much. I’d be more concerned with wave height over any shallows at the tip as a reason to choose route Y.

Yes, it’s a bit risky to generalize since complex airflows sometimes do strange things but I think that in principle Point X could be in a low pressure zone created by the wind blowing over the ridge next to it and a low pressure zone could “pull” the air around the point and accelerate the airflow.

Personally I cannot see the wind shadow line based upon the information given. It likely is in-between the two courses, but it changes with hill tops irregularities. You’d be looking for a change in the texture of the surface of the water. I would have expected the wind to be stronger at the point where it gets bunched up then rounds the corner.

I would have paddled just inside the shadow similar to red then paddled on through the corner to align up on the waves with the wind on the port bow. Falling off at ‘x’ a little towards ‘y’ might help at the “rounding” but you don’t want to be too far downwind of your course to point B.

My boat does not beam winds well.

My forecast would be for course Y.
Here’s my reasoning.
First off, staying close to shore until reaching point is likely a better path, but unknown from the image is the height of the cliffs. At some point the wind speed will have a katabatic influence and the wind speed would pick up as it fell down the cliff due to gravity. But that usually requires a significant amount of elevation difference (thousands of feet) before that would happen, and thus more likely is a vertical wind eddy with gusty conditions coming back to shore.

The major influence would occur at the point. The wind going over the top of the island would slow down due to friction with the land, and when that happens it will change directions and point more towards the wind generating low (backing wind). This is assuming that the prevailing wind coming towards the island has been coming over some distance of open water - the low will likely be in the direction of B (look up Buys Ballot Law).
And that means the prevailing wind over the water at the point will combine with the backed wind coming off the point of the island, a potentially nasty converging wind situation. It would lessen the farther one is from the island.

Point Y might also have more sea chop depending on currents as the wind has a longer catch on the water. Need to pick your poison. Does wind or sea impact your boat more? Easy to make a theory from just a picture.