I am thinking about winter paddling in a canoe this winter and wondered what other canoe folks use for clothing. I specify canoe because I would think being in a yak might be cooler since you’re in the water. I have looked at the hydro skin at nrs and actually have a short wetsuit, but that gets hot. Wondering if I just wore wool would that be adequate if I took an inadvertent flip?

Here is what I do in mid-Michigan … others may have different opinions.

I paddle streams that I am familiar with and are well below my skill set. The odds of having an unplanned OOBE are low (but not zero). Lately I’ll use a paddling suit (dry suit except for a neoprene neck that will leak when my head is under water). I haven’t been using that though on our February overnight on the Ausable though … don’t really want to put it on in the morning. On that trip & previous to buying the paddling suit it is and was “Wool & Plastic” always with a full change of clothing in a dry bag. So far my canoes have been kind enough to keep me in them so I haven’t yet needed to test the dry bag.

Back in the day we would paddle whitewater in a farmer john wet suit plus a fleece or wool sweater & a wind break. Wring out the sweater after a swim. That would be for air temps in the upper 30s - 40s. Not so much these days. I do have hydroskin & use it but it doesn’t breathe.

My plan is flat rivers, but there is always a chance of a swim. I am in Maryland so I was thinking maybe good wool and a dry bag with fire making material would be sufficient and more comfortable than wetsuit or hydroskin. The short wetsuit leaves you soaked I. Sweat after a paddle

Whether you are in a kayak or canoe, the rules for cold water are exactly the same. Always dress for immersion. Air temperature is irrelevant once you are in the water. A vast amount of information can be found at the National Center for Cold Water Safety and many other sites. Without protection from cold water shock, you can be essentially dead before you get your head above water. Swim failure, losing the ability to the muscles in your hands, arm and leg muscles can occur in as little as 5-10 minutes in 40°F water. Cold water shock and swim failure are usually the cause of death, not hypothermia as many think. Hypothermia takes a fair amount of time.

Failure to wear a PFD and cold water, often combined, are the overwhelming cause of death for canoeists and kayakers.

As far as canoe vs kayak, if you are wearing a spray skirt, an essential part of a sea kayak and not an optional accessory, you are likely to be warmer than in a canoe, unless decked. In an open canoe your lower body is not protected from the wind.

Pay attention to rstevens15. This is as serious a question as can be asked on a board like this. We’ve lost two posters from this board in cold water. Cold water is deadly serious.
A dry suit with a base layer, expedition fleece, and wool pants & shirt beneath is wise. Then add a dry bag containing a change of clothes and a firestarter log, tinder, and a lighter or two in a peanut butter jar. A neoprene hood isn’t a bad idea either. IMHO that’s the best, and safest, way to paddle a canoe in the cold.

That said, when I was younger I cheated on all that and survived (as did several fur traders, trappers, timber cruisers, & Native Americans), but luck is neither a survival strategy or a plan.

I once had an adjustable seat fall out of its rails on a cold (mid 30s-low 40s) day in near freezing (35deg?) water. I was looking up a green lake water before I knew what happened. I was wearing synthetic layers, including expedition weight polypro with wool on top. I was maybe fifty or sixty feet from shore but at the base of a cliff so I had to swim a bit farther than I would have liked under the conditions. (BTW, It would have been a lot quicker if I’d had a nice long painter so I could swim to shore and pull the boat in rather than side stroking and hauling it to shore.) I stripped, wrung then shook out the clothes standing in snow and put everything back on. And then the boat needed to be drained and the seat reinserted in its rails, by which time my fingers had been soaked for some time and were getting pretty darned clumsy. Then it was maybe a mile or mile and a half paddle back to the car. I was seriously shivering for sure by the time I got there. Tying knots to get the boat secured to the car was difficult - and I am no stranger to working in cold - I was a night shift snow maker at a ski hill for four years. Dress for immersion, sure, but the show isn’t over when you get your feet on dry land, You still have to get back and that can take a while and be uncomfortable. That’s when serious hypothermia could become an issue.
I bought a wet suit before the week was out. After all, you see these films of folks surfing L. Michigan in winter with only wet suits and apparently enjoying it. At least they don’t quit doing it… crazy_face:

For the next few years I paddled with the wet suit instead of the long johns and changed to polypro/wool on shore if we were camping. But a wet suit gets awfully clammy if you don’t dump. I’d sweat when paddling then get cold & wet when I slowed down. A thin nylon base layer under the wet suit helped, but wasn’t really ideal. Its also likely to get sand inside when you change in a tent or on a sandbar. Wearing that isn’t comfortable either. Those days looked like this: 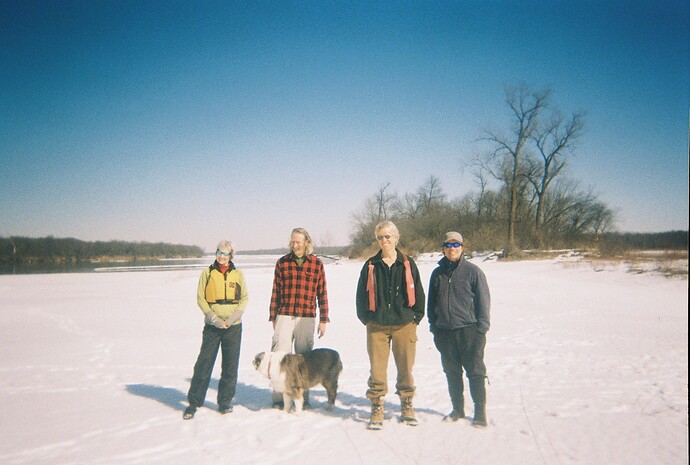 Finally I sprung for a dry suit. Found one on Ebay for $120. It was military surplus and made for folks who did water rescues from helicopters. (It even came with the rescue team patch.) It was very heavy duty and had the zipper running across the front from shoulder to shoulder. That zipper compressed like a leaf spring with every paddle stroke, then popped back on the stroke recovery, and compressed again on the next stroke. It was exhausting. It would have been fine for survival swimming or floating until rescued, but it was a pain to paddle in. Nevertheless I did paddle in it for a couple years until I found another $120 military surplus dry suit with a zipper across the back. Its a pain to get in and out of and isn’t breathable but, by gum, I think it works well enough. So that’s what I’m still using, though I haven’t paddled in the winter for two years now.

I really envy folks who can afford a really good breathable dry suit and get to wring their money’s worth out of them running snow melt white water or kayaking in cold seas - but I wouldn’t get enough use to justify the cost. And they are costly. The suit I have is safe, and that’s enough for me.

And canoes are colder than kayaks. There have been more than a few days when I’ve thought that even getting the lower half of my body out of the wind would be a real comfortable idea.

Best to wear a dry suit or wet suit. You can wear poly under neath for comfort. Quality dry tops and dry pants with good gaskets are acceptable. In cold weather they are not that uncomfortable at all. If you get too warm, stop and stand in the water for awhile.

I have worn a long farmer john in the summer on Puget Sound because the crossings are long and the water never gets above 55 degrees. Even then it was not bad with a garment between me and the neoprene.

People used to wear wool in the old days. That is because they had no other choice. That first capsize in the off season is always a shock. It kills people. Dress for immersion and wear a freakin PFD and paddle with peace of mind. ,

Thanks So Much! I was thinking about the hypothermia aspect once I got to shore, and missing he BIG PICTURE of the initial cold water splash and shock. The wetsuit option isn’t looking so bad now! Thanks for advice and for stressing the dangers. Easy for me to miss that part since I haven’t had the- flip, but I totally agree, you have to plan for it to happen.

To Follow up, I followed the link to the National Center for Cold Water Safety. It was incredibly eye opening for me, and I had heard a few of the myths " air and water temperature… etc misinformation." thank you again for taking time to answer the post with solid information.
Dan

With a wetsuit, as the water gets colder, you need a heavier wetsuit to provide sufficient protection in the case of cold water immersion, as opposed to just using a better base layer for a drysuit. At some point the wet suit becomes too heavy and stiff to be comfortable to paddle in. For me this was around 50°F water temperature for a 5mm wetsuit, but it varies from person to person. I have a 7mm wet suit I used to use for salvage and oyster diving in January in the Chesapeake Bay, but it was totally unsuitable for kayaking. Most cold water divers now wear dry suits made for diving.

Modern wetsuits have come a long way in the last few years and others can give you advice on them. I stopped wearing wetsuits when I got a drysuit. Be aware that wetsuits when out of the water do not do that good of a job in keeping you warm when you are not actively paddling, especially when taking a beach break. You should carry something to put on over a wetsuit for these occasions.