Has anyone purchased any wooden kayak kits from Waters Dancing Boat Kit Company?

I have helped build both a CLC and Pygmy sea kayak. These boats look very much like the other guys.
Nice looking boats, but what are your real questions?

Thank you for the reply. I was wondering if they were as good as the quality that CLC and Pygmy offers.
I really like the look of the Waters Dancing boats.

Go to www.kayakforum,com for a better chance of getting info from someone who built a Dancing Waters. They have a separate section devoted to Building.

Thank you very much for the info, it is greatly appreciated.

Personally I’ve never heard of them before. But that really don’t mean anything. The ad copy sounds a lot like everybody else. The boats in the pictures are all pretty. The staining, inlays, fit and finish are also techniques shown in the others. Here are a couple of links I found for the company. Not real big which might account for the lack of Google hits. The second link is a blogger building one of their boats.

Getting in and out I’d find that ridged high seat back a problem. These all look like high volume touring designs. If you had any banana boat/Greenland boat desires these might not be right.

Frankly, they look very bland and derivative of each other. There’s little difference in the designs other than size.

“Bland” they are stick and glue. Plywood likes straight lines. If you want flowing lines look at strip built.

Some of the newer stitch & glue kayaks are pretty nice. But yes, a skilled craftsman can create art with skinny strips.

Exactly my point. There is a wide variety of “stitch and glue” plywood designs on the market, so there’s little excuse for uninteresting designs, regardless of the construction method. Pretty much any skin-on-frame design can be reproduced in plywood and the “Shrike” shown above is a good example of an SOF-inspired design.

Rival51, that scene with the S&G kayak looks awfully familiar. Looks like Whidbey Island’s banks in the background. Was it taken from Port Townsend?

@pikabike said:
Rival51, that scene with the S&G kayak looks awfully familiar. Looks like Whidbey Island’s banks in the background. Was it taken from Port Townsend?

That’s where Pygmy Kayaks is located.

Nick, you beat me to it. I was going to snag one of these as well. I guess that I’ll settle for a naster view:

@pikabike said:
Rival51, that scene with the S&G kayak looks awfully familiar. Looks like Whidbey Island’s banks in the background. Was it taken from Port Townsend?

That’s where Pygmy Kayaks is located.

Taken from Pygmy’s website but I never saw that pic before. However, I used to live in PT and paddled where that photo is countless times.

Rival51, as I expect you know, the principle of the Shrike is that one can design according to one’s preferences. The black painted version is full-length (32 pounds), with a high clearance (12.5 inches) at the front of the cockpit for those like me whose legs and back are more comfortable when sitting with well bent knees. The clear-finished Shrike (23 pounds) in the top photo is for those like my son who want an ultimate rolling version, so the topsides are reduced in height by 60 mm (his choice) and the cockpit opening is reduced to the dimensions similar to those of the traditional Inuit kayaks.

The overall length and beam are varied according to the total planned weight of paddler and equipment, as shown in a graph in our FAQs: http://cnckayaks.com/shrike/faq/
So, you can choose the length of the kayak, the height of the topsides, the size and shape of the cockpit, the knee clearance at the front of the cockpit, the position of the bulkheads, and whether or not to have hatches, and whether or not to have a skeg. These options are all explained in the Build Manual that comes with the free plans download. This flexibility is enabled by the fact that we give you the source files of the design in digital format, enabling one to print out the plans at different scales.
For example, one of my granddaughters chose to build a 90% scale Shrike (28 pounds) with a slightly lengthened cockpit:

I explain this at some length as paddlers are accustomed to being offered a range of different models of kayaks, and not a flexible range of options. We have photos of the first one hundred Shrikes built in the past three years, and you can see the range of options chosen by these builders in the photos at: http://cnckayaks.com/shrike/build-gallery/
For example, you will see the beautiful example recently built by Magiliaq Padilla, the nine-times Greenland rolling champion.
For me, kayaks just have to be beautiful, and Inuit designs are a fine basis for combining beauty with good function.

Spotted a black Shrike at the Michigan Greenland Training Camp in August – it really is a beautiful boat. 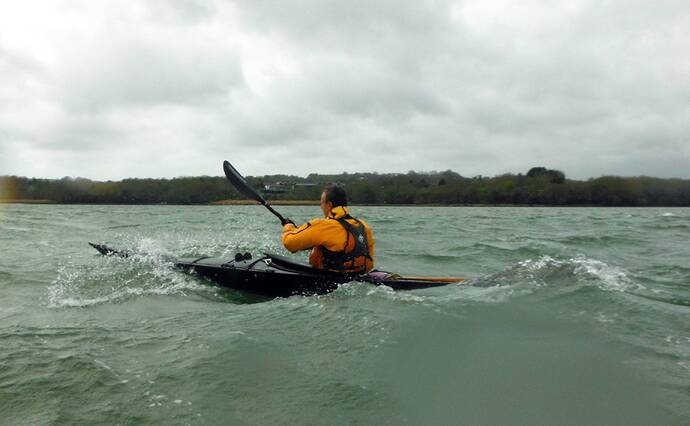 … and she loves choppy water.I had to paint the prototype as I’d made so many alterations, and scribbled felt-tipped comments all over her, but now I’m glad I did. While building her I often used to wake at 4 a.m with an idea, creep quietly out to my shed and make some changes. All the effort is worth it when someone like Willowleaf admires her.
Nick.