I picked up a yankee rebel used for cheap. There are 2 minor leaks which I should have no problem repairing. The hull makes a crackling sound whenever its moved or gotten into. So here is my question. Would applying a new layer of fiberglass through the inside solve that problem, so long as I store the canoe properly?

First
make sure the crackling sound is not something as simple as loose seats, thwarts or gunwhales by tightening all screws. I’ll leave repair advice to those more qualified, but this is a common occurrence.

Do you have an idea of how much work
is involved with fiberglassing the inside, and how much weight it will add?

Does the hull hold form when paddled? If so, ignore the crackling or learn to love it.

or find where the soft spots are and
confine your fiddling with glass and epoxy to that. You have a Sawyer “volkscanoe”

I agree with the other replys. Yankee rebels were rather cheap boats that Sawyer made to sell in Kmart, some blame them partially for the eventual death of Sawyer.

Nothing wrong with picking up a cheap canoe to use as a beater, use it for that and enjoy it for what it is. Old Yankees aren't worth sinking a lot of sweat or money into.

Patch the leaks, use it as is and enjoy not having to worry to much about damaging it.


disavow that name. Yankee Rebel is just too much an oxymoron.

Good advice except the Yankee Rebel is a more than a “cheap boat”, its a great canoe. Fast.

Also, a canoe introduced in 1976 being blamed for Sawyers closing twenty year later seems unlikely.
I would like to read the story if anyone knows it.

What canoes are you comparing it to when you say fast?

The Yankee Rebel was described as a cheap, mass market boat and a contributing factor in the closing of Sawyer. It may have been those things but kneeling at center, with an adjustable paddle, the boat is fast. Standing at the bow, I paddled two relaxing passengers upstream against strong winds, steady and responsive.

My last canoe was a Guide 147, grew up with two Grummans, a 76’ Coleman, tried a MadRiver and a vintage Old Town, and everything Kittatinny Canoes rents.

Honestly, it may be my lack of experience with fiberglass and the hull shape leaving me overly impressed. That and the fact that it was produced for nearly twenty years.

It really doesn’t matter what we think but there is just a little history we presented. What matters is YOUR experience. You don’t paddle for our enjoyment

But… I have to ask… Did anyone take a picture of you standing at the bow paddling upstream? The image I get in my mind is Huh? This may have well been done in Adirondack guideboat days but to me it is new!

It’s not my best side but this is what standing looks like. It may be unorthodox but it keeps passengers dry. 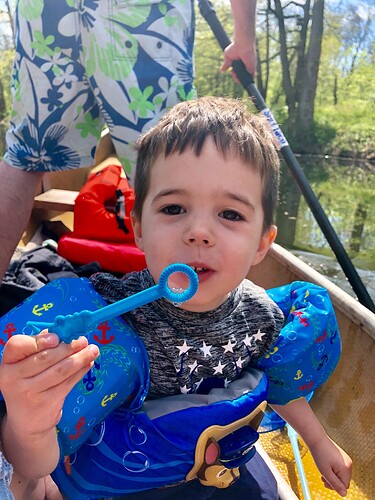