Tuesday - Feb 27
You win a few and you lose a few, and today we won on game plan B !
The wind was fairly light so we planned on paddling on the Florida Bay side, into Lake Surprise and look for some crocodiles, but when we got to the put in, the water was much choppier than we expected, so Nanci suggested game plan B which was in the Atlantic launching at Garden Cove and it turned out without a doubt to be our best undersea viewing day so far this season.
After launching we crossed the boat channel and headed to Rattlesnake Key where we paddled up the North side paralleling the shoreline until we came to Turtle Creek, (so named by us since last year we paddled with two turtles there). Shortly after entering the beautiful mangrove shrouded sandy bottom creek we started seeing Tarpon all around us. Some coming beside us and others coming toward us and after reaching the turnaround point and returning we counted 30 coming toward us. We have seen them many times before, but never this many.
After exiting the creek we were searching the gin clear water for sharks, and Nanci saw the first of the year "Cushion Sea Star”. It was an absolute beauty about nine inches across and bright yellow. It was so bright that you could see it from twenty feet away on top of the green sea grass bottom. She took a bunch of pictures of it, and then by leaning on my paddle so I wouldn’t tip over, I was able to grab one leg and pull it up where we took more pictures of it before placing it back on the bottom. Just before we left Nanci took a GPS way point and we figured we would see if we could find it on our return.
Continuing we saw lots of sharks, and Rays, (way too many to count). We crossed the very large cut between Rattlesnake Key and El Radabob Key and then continued to our goal which was Shark Creek.
Just before Shark Creek, there is another one that we normally can’t see too much on the bottom since the tide runs very fast and boat control is tricky, but today it was dead low, with very little tide and at only a foot or two deep it was like floating over a mini reef. There were Snappers, Jacks and Grunts everywhere we looked, along with various other fish including a Sargent Major and many that we couldn’t identify and since we were just drifting they would swim up to and alongside our kayaks checking us out. I saw an emerald green one that was about a foot long and Nanci saw a multicolor (red, black and yellow) weirdly elongated one (possibly a blenny). We could have spent a long time there, but headed back out and to Shark Creek. When we got to its mouth, the tide, which was a minus one, was so low that we had to either forget about entering it and go back or push over the muddy grass. We opted to go in and did “kayak push-ups” to get there. it was well worth it since once in, the conditions were just like the previous creek, except this time we saw a bunch of Snook and some of the largest Snappers and grunts that we have seen and much to Nanci’s delight a lobster that eyeballed her as she eyeballed it. After enjoying the creek, we rafted up for lunch as we were watched by a beautiful all blue, blue crab and then headed back. Crossing the big cut we chased a good sized Spotted Eagle Ray. Just seeing one is always a thrill and then we saw a second smaller one. On the way back Nanci did a "Go to “on her GPS to the yellow Cushion Sea Star and when we got to the point it wasn’t there, so we searched around a bit and just when we were ready to give up she spotted it. We estimated that it had traveled thirty feet in the five hours since we first saw it.
After admiring it we left and hadn’t gone more than a quarter mile when I spotted another one.
This was a bright orange beauty, but was too deep to pick up from the kayak, so while she watched it, I paddled into the mangroves, got out of my boat and waded out through the squishy bottom and picked it up for more pictures. It was about an inch longer. I estimated the first one to weigh at least a pound, and this one a bit more.
After getting back to the take out we agreed that this was the best and most diversified undersea viewing day so far his year. 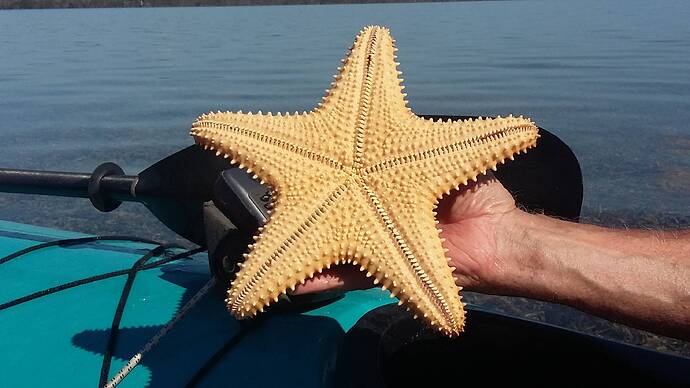 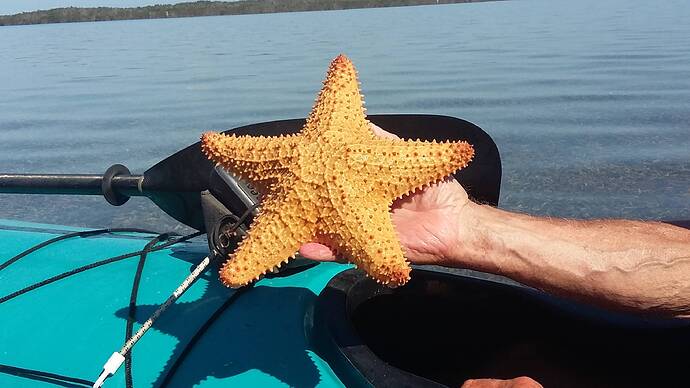 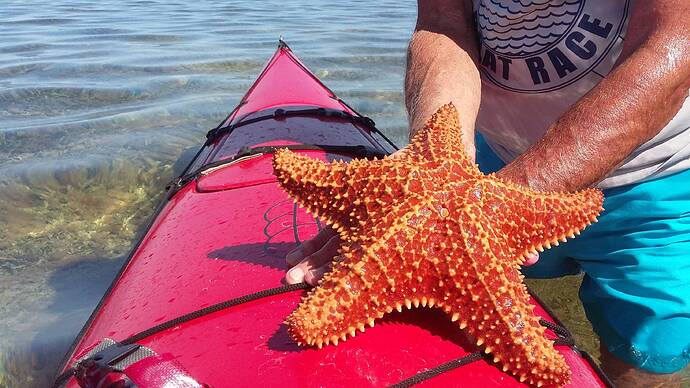 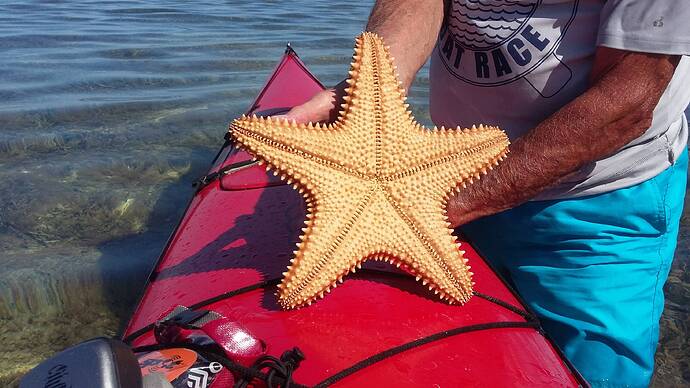 So many magical creatures in your water. And it doesn’t freeze…

Nice trip report! I had a dried out one of the orange colored Cushion Stars a neighbor gave me as a kid. When in high school and college I use to collect marine tropical fish to sell. It was good money back then for a kid making several hundred dollars in just a few days each trip doing something that didn’t feel like work!

Sure beats what we got up here Jack - great to hear from you.