Yet another cold water hazard

Not paddling related unless you’re trying to get into the Great Lakes. They say he was only 10 feet offshore. 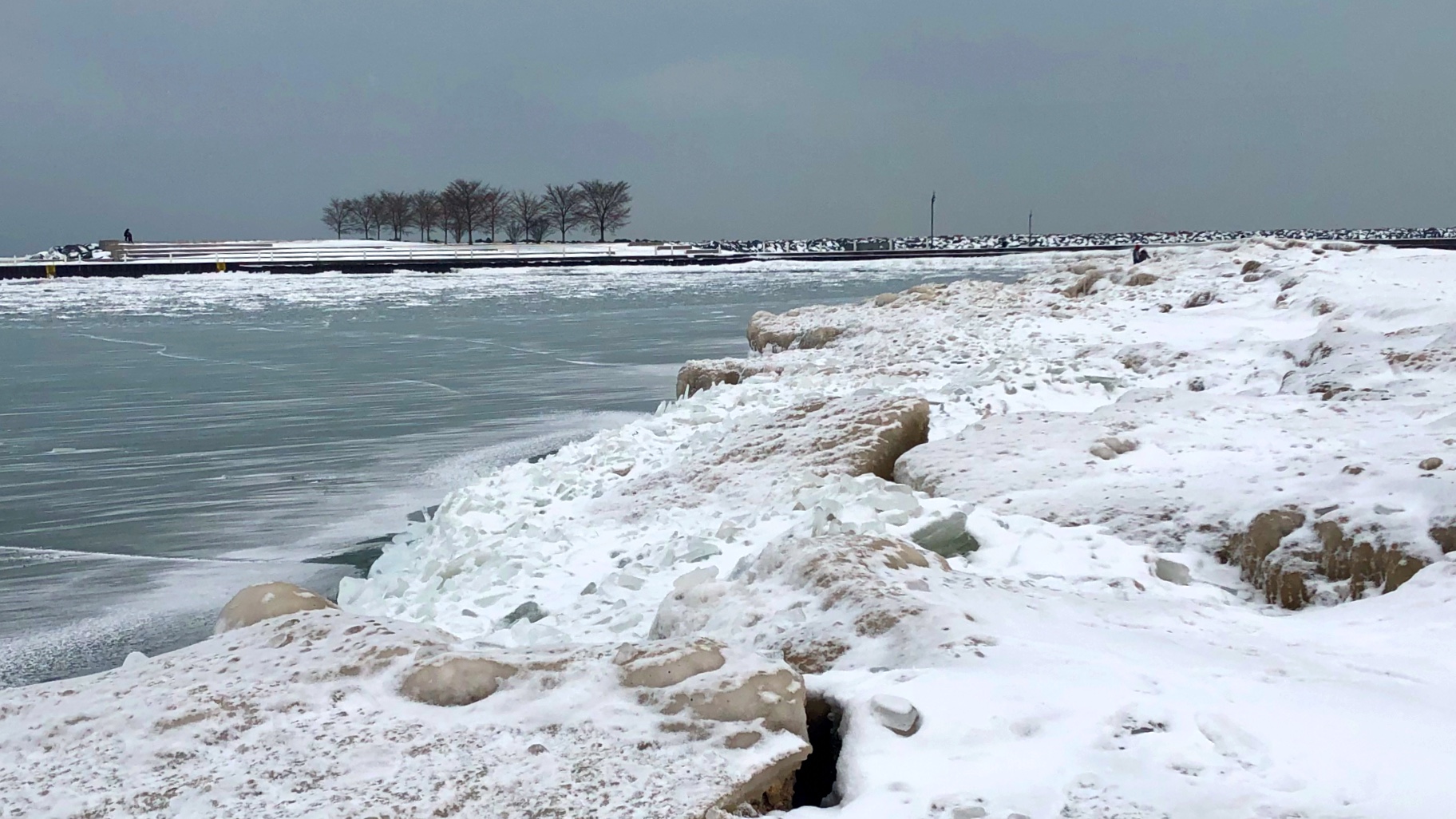 As enchanting as Lake Michigan's ice may appear, it’s unmistakably dangerous, as evidenced this week by the presumed drowning of an Indianapolis man who fell into the water off shelf ice at Indiana Dunes National Park on Monday.

On the local news they mentioned that even the larger ice mountains that build up on shore can have hollow pockets due to being undercut by waves so one could fall through and be in a very bad situation. I took this pic at Tiscornia Beach a few days ago (around 40-50 miles from Indiana Dunes) and I think it’s spooky how you just can’t tell where the beach ends. 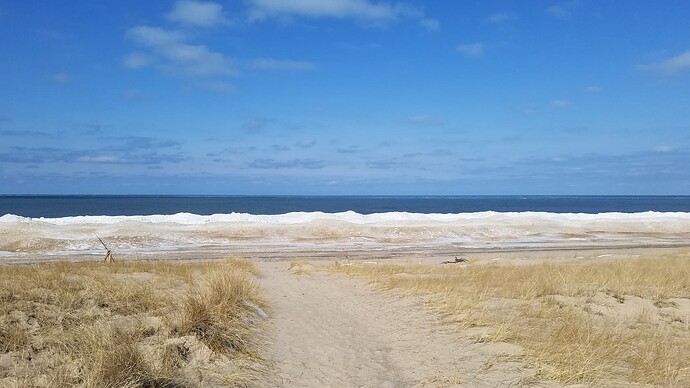 I’ve seen photos of the phenomena before but had a difficult time understanding how people could not know they were walking on ice. The last photos in the link above and the cross section drawing make it clearer to me now. If one is walking on snow covered dunes I can see that happening.

I have many times seen them on Lake Erie and they are nothing to mess around on. We used to have PSAs on TV warning about ice dunes but I haven’t seen them in years.

I have seen them where there is the cavern like the cross section shows and then the ice at the bottom has refroze and people fall down in one with no way to climb the smooth sides. If alone you are trapped. 25 years ago my black lab got into trouble on the ice and I had a heck of a time getting her back in. as soon as I did she was ready to play again.

I posted some photos a couple weeks ago that showed some forming on our beach.

Ice shelves also develop on rivers, and can be very dangerous if the current pushes you under.

Being terrestrial creatures and seeing ice melt on land every spring of our lives makes us think ice melts from the top down. It ain’t necessarily so. There’s almost always water under ice and the only reason its water is because its warmer than ice. The ice melts from the bottom up and you can’t count on seeing it from above if its under a layer of snow. Seems like every spring I hear about snowmobiles hitting such spots. Sometimes it isn’t fatal.

Back in the days when ice was harvested and stored to keep food cold through the summer, folks spent a lot more time messing around in iffy situations where such spots might be encountered. There was a tool for walking on ice like that. It was a heavy iron point with a hook on the side. It was attached to a heavy walking stick. Thin ice could be detected by the sound of the thump it made as the user walked along. If it punctured, back off fast. The hook was supposed to be used to bite on the ice and allow a person to pull themselves out if the ice broke - maybe.

I’m reminded of a particular trip I once took. It was early spring and there was open water all the way but shelf ice along almost all the banks and around islands. The river was falling so there was space between the shoreline shelf ice and the water. There were flocks of returning geese, must have been in the thousands, over the nine or so miles of that section. Most were on the water and swam away as the canoe approached, too lazy to fly, I guess. When there was no where else to go they’d hop up on the shelf ice. Eventually enough geese hopped on the shelf that their combined weight was sufficient to break the ledge off with an almighty crack and splash. Then they flew, honking loudly. That happened three times on that little trip. Never have seen it again.
Memorable.

Warm weather in Feb and Mar has people out paddling.
Dress for immersion or don’t go out there.

Ice shelves are pretty common around here - especially in the deadwater behind old mill dams (and we have a lot of those). One of our traditional spring trips is on a river that often still has ice when we paddle it in March: 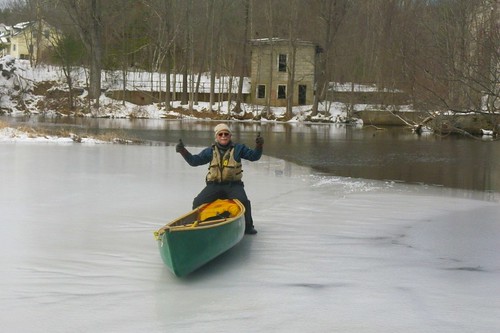 To be honest that looks a lot worse than it is - the water there is only a couple of feet deep, so even if you broke through it would be pretty easy to get out. If we didn’t know the river we wouldn’t go out on it in those conditions.

I went looking for a picture of a more dangerous ice shelf in moving water, but I couldn’t find one. Ice shelves in moving water usually don’t last long due to changes in water level. As level moves up the warmer water covers and melts the ice. As the level drops the ice tends to break off under its own weight and float away. You can see in this picture that there was clearly an ice shelf in this eddy at some point, but it was gone by the time we paddled. 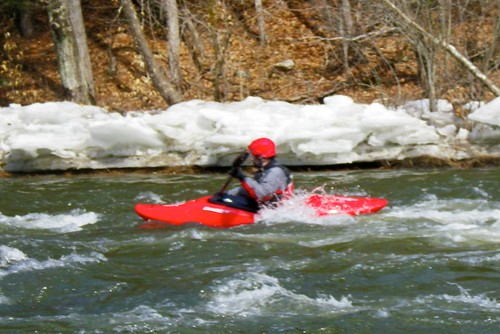 I did find this which is a pretty good example of an ice shelf extending out over the river. 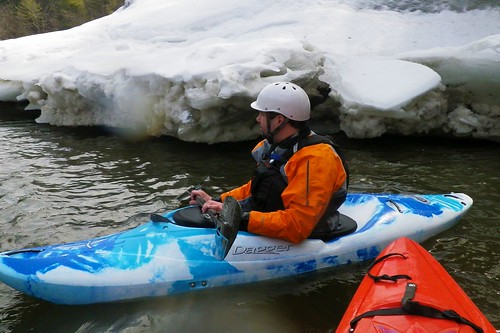 This one wasn’t particularly dangerous since it is on the downstream side of rock a very large eddy. Still, you can see how hard it would be to get out from under that overhang if the current was pushing you in.

We don’t get the mountains of ice described in the OP around here, but no matter where you are ice is nothing to fool around with.

To be honest that looks a lot worse than it is - the water there is only a couple of feet deep, so even if you broke through it would be pretty easy to get out. If we didn’t know the river we wouldn’t go out on it in those conditions.

I agree. Knowing the river very well is key. Large shallow areas with ice shelves are not so worrisome. Unlike where you are, the river I live closest to is all sand. There are channels that can be deep and swift, they change a bit over time, and they can ice over so it can be hard to tell exactly where drop offs and channels begin and end under the ice…, but they are always in about the same areas - channels between groups of islands, for example. That’s where its wise to wait. If I absolutely had to go through there in those conditions, its pretty easy to pull a canoe overland on snow and ice. During ice out there are ice dams that form and, of course, they’re dangerous to paddle near in current or walk on. That might be similar to what the OP is talking about.

Its been three years since I’ve done any ice paddling (following leg surgeries) but on a good day its really beautiful if you’re careful and wearing (at the very least) a wet suit under warmer clothes. I remember one year where the ice shelves had occasional areas, maybe 30 or 40 feet across where the texture of the ice changed abruptly from glazed snow to these little vertically oriented ice crystals about an inch or two high. They seemed to form geometrical patches. I wish I had a drone to get a high enough view to see them clearly. (Hexagonal like snow flakes?) All I can think of is that there was a freeze/thaw condition that occurred as the river rose and fell that might cause such a thing. Beautiful and mysterious - at least to me. 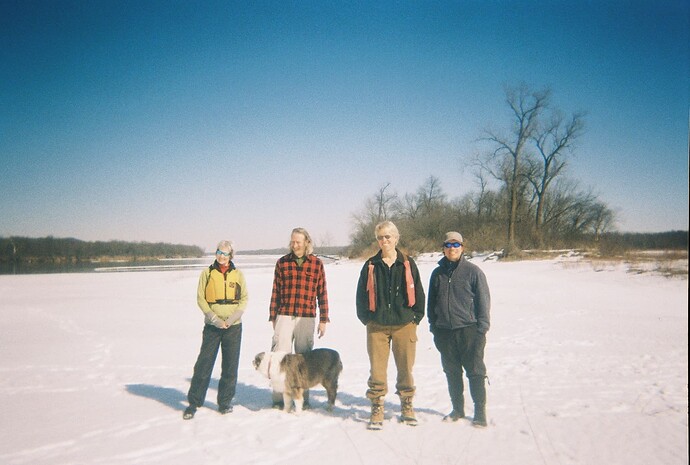 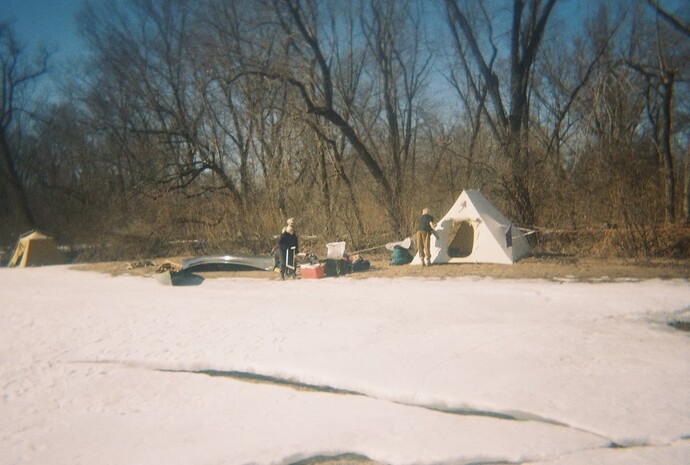 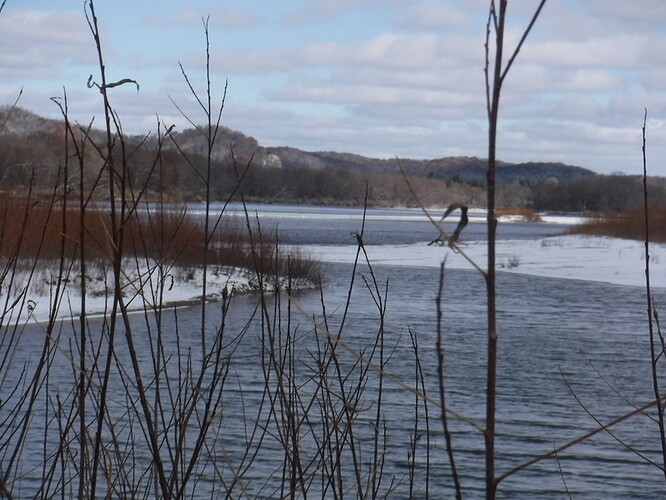 And another one Homer, AK 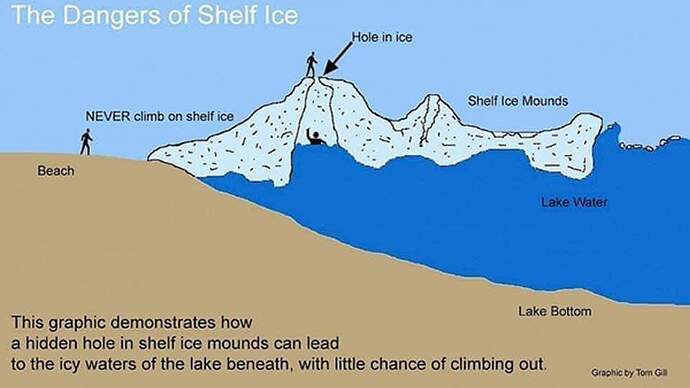 Last week we had ice damming on the river and flooding backed up across the street from my house. The water came up 4-6’ and stayed long enough to refreeze about 3-4” thick in the woods. Then the water went down leaving the ice supported off the tree trunks with 3-4’ of air below it. If anyone would have walked out on that it would have been bad. Picture being out in the middle of 20 acres of woods and falling 4’ down thru ice into cold water and mud.

A few days later when it started to fall it sounded like a 1000 elephants coming thru the woods.

In the spring, the Inuit are known to climb under the pack ice in salt water with step ladders. They are tired of eating winter staples and long for shellfish. They are careful to harvest clams under the pack ice, with careful knowledge of how long they can stay down there before the tide rises.

Yeah, we canceled a trip last weekend. The river has some quick current around the takeout and the takeout eddy was fully covered by an ice shelf. Alternate takeout is river left on the outside of the bend and a steep climb. No good staging points on that side either. Oh, there were quite a bit of good sized ice chunks in the main flow. Probably could have pulled it off at the cost of wet feet but … We went x-country skiing instead.

Paw Paw river a week ago with conventional ice shelves if there is such a thing. No way I’d get on the river in those conditions. 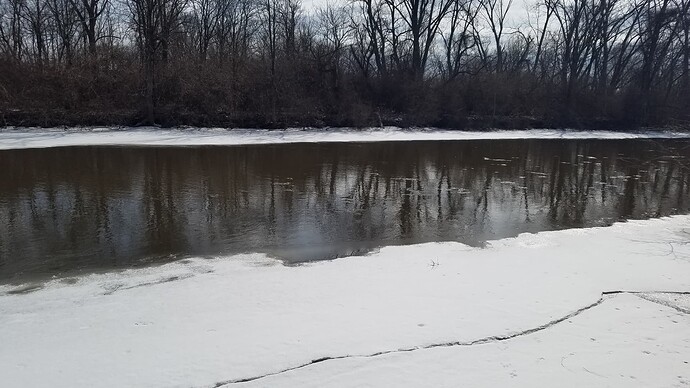 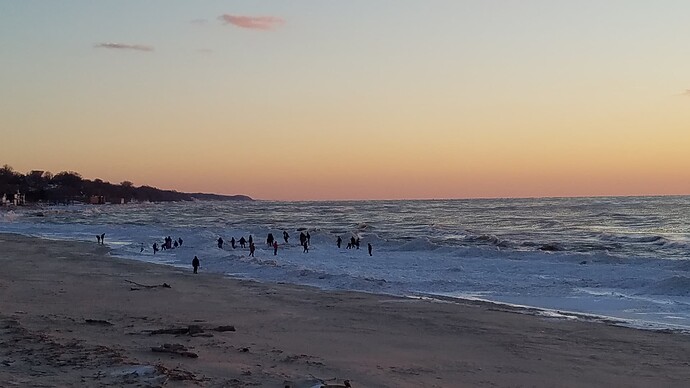 Depends on the current.

That is a terrifying picture!

I think so too!