Maybe it is better to roll without the aid, although an instructor taught me rolling with a float bag on the end of the paddle. So it’s all about the hip snap, is there a way to get good at rolling fast, and not take years and years I don’t even plan to do class iv soon I just want to be able to do the stuff at the river park in Oklahoma and get good there I might use the hi n dry and then work up to being able to roll without it. It didn’t take me very long to ride a bike without training wheels, I guess it’s about determination, but can you practice rolling by your self.

Most of us who gotten a roll regularly practice by ourselves. But if you can’t do it without a flotation aid you haven’t “gotten” it yet. Trying without good guidance for most people just drills in lousy habits that can take a very long time to get by.

I have been in rolling classes with people who got it in two sessions. That is unusually fast, but years is way more than usual. If it is taking that long the cause is in the paddler’s head or a poor instructor match.

@Celia said:
Most of us who gotten a roll regularly practice by ourselves. But if you can’t do it without a flotation aid you haven’t “gotten” it yet. Trying without good guidance for most people just drills in lousy habits that can take a very long time to get by.

I have been in rolling classes with people who got it in two sessions. That is unusually fast, but years is way more than usual. If it is taking that long the cause is in the paddler’s head or a poor instructor match.

What about the river park in oklahoma they provide rolling lessons there it’s a white water park you take kayak up a conveyor and kayak down man made rapids. It might even be more fun than a real river. I guess the hi n dry and learning to roll for real is like karate some places make you work for black belt where you feel like you actually accomplished something or you can go to a karate school where they just hand anyone the belts and years later you don’t feel like you really got a black belt. I guess the best way to practice kayaking is a white water rafting park. I think it’s called riversports okc that’s the rafting park. I heard Kansas was talking about one too.

For me… someone to guide the paddle as it sweeps and switching to a Greenland paddle. Then… breaking through the discomfort of rolling alone. Remember that you can always pull the loop and swim. You aren’t going to drown.

Winter pool sessions are great. Helpful people all around.

One problem I don’t have a kayak. Is there a way to practice rolling without a kayak.

Your reply is indecipherable and a quick check on my profile would tell you I am unlikely to know anything about a water park in Oklahoma.

You have already gotten the advice you need. If you want to do WW for real get lessons.

Some people learn to roll in a single session. Some require years to obtain a reliable roll. I rolled a kayak the first time I attempted to do so without any instruction other than verbal, and the verbal instruction was “sweep the paddle out and hip snap”. I sort of knew what sweeping the paddle out meant, since I had seen plenty of others do it, but I was pretty much guessing on the “hip snap” part.

So I came up on my first attempt. But I had practiced rolling an open boat (on my own) for quite a few months prior to that so I probably had some of the core body movements ingrained by that point. What is more, that first roll stunk. I was applying way too much muscle to the paddle to try to “pull” myself up.

After that first roll, I benefited from some high quality instruction from some of the old timers at NOC including Joe Holt, Tommy DeCuir, and others, as well as Ken and Juliet Kastorff at Endless River Adventures. Good instruction definitely helps.

Since then I have been involved in teaching others the kayak roll with a fair degree of success. Part of the problem with learning to roll is an observer only sees what is happening with the paddle and none of the key trunkal movements that are going on under water, some of which are further invisible beneath the spray skirt. In my experience, women often learn to roll sooner than men do and master it more quickly. Part of this derives from often greater flexibility and a generally lower center of gravity. But it is largely also due to the fact that women are less inclined to try to “muscle their way up”.

The roadblock to rolling that I see most commonly is a failure to get the head and upper body up near the surface of the water, and a failure to keep the paddle blade at or near the surface of the water during the sweep. Part of this is because people naturally tense up when they capsize in an enclosed kayak and it requires a fair degree of relaxation on one entire side of the body to achieve this position. If the head, upper body (with PFD), arms, and paddle can all be gotten near the water surface and kept there, they will provide flotation and support for the lower body to initiate the rotation that starts the boat rolling up. The second most common problem is trying to lift the head and body out of the water prematurely after the boat has started to roll up, which kills the roll and drags it back down. Trying to lift the head and body from the water requires contraction of muscles on precisely the wrong side of the body, which will tend to stop and reverse the upward rotation of the boat.

There are a number of different types of kayak rolls that are used in whitewater, the two most common of which by far being the C-to-C roll and the sweep roll. There are some good books and videos covering both, but for most people, these sources will not be enough to allow mastery of a roll without some one-on-one instruction. The best place by far to learn a roll is in protected warm water like a swimming pool, that is shallow enough to allow an assistant or instructor to stand beside your boat. It helps some people to wear a diving mask or swim goggles so as to be able to see their paddle blade clearly, and nose plugs will increase your comfort level.

Unfortunately,. a successful roll generally requires a series of maneuvers, some of which require multiple different muscle group contractions to occur simultaneously, and if any of these are botched too badly the roll probably won’t be successful. When done properly, these movements occur pretty quickly and most people simply can’t concentrate on perfecting more than one aspect of the roll at a time. A good instructor can break down the movements, assess what is working and what isn’t, and focus your attention on mastery of one component of the roll at a time.

Lessons and practice. Not much you can do to short cut it. This is how all the people who roll well have done it.

Take a lesson or two (or four) until you have a basic roll. Then every time you go out, practice a few rolls. As you feel better, go back for a tune up lesson to make sure you aren’t learning bad habits, and to work on other types of rolls. But even the people with “bomb proof” rolls keep practicing. And even they will swim from time to time.

Having a boat of your own will help (at the least in that you can more easily go for a paddle and practice whenever you want, not just when the livery place is open). And practice time can be much easier - can be done in ponds, pools, etc. When you buy a boat, you can get a boat that rolls easier or harder. But what makes a boat roll easier may also make it not perform well in other areas - everything is a trade off.

There is really no substitute for hands-on instruction. Here are a couple of examples from a kayak skills weekend I attended last summer – with the instructor standing beside your kayak in the water they can guide you and also help you concentrate on form without panicking because they are right there to flip you back up and to assist with completing the roll until you get the body memory locked in as to how it works. Learning to balance brace, as the shot from the indoor class shows, helps you get the feel for how to come out of the water with your head down, using how buoyant your own body and the paddle are so you can learn to trust them to get back to the surface.

It would really be best to get your own boat if you want to master this skill. Each rental boat is going to be slightly different and even if you get instruction you will not have a boat to practice with on your own time. 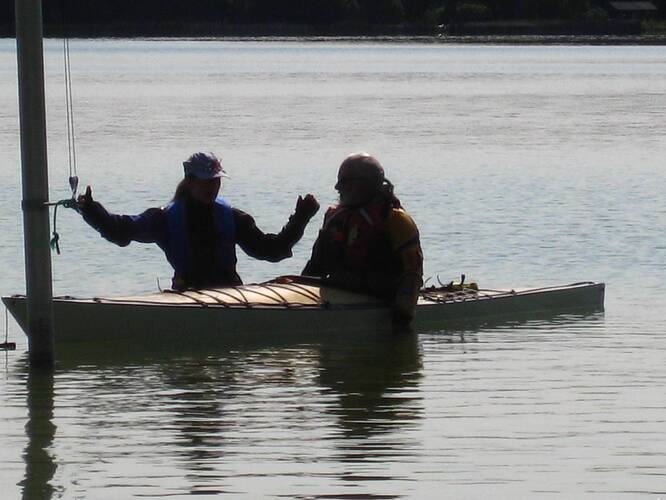 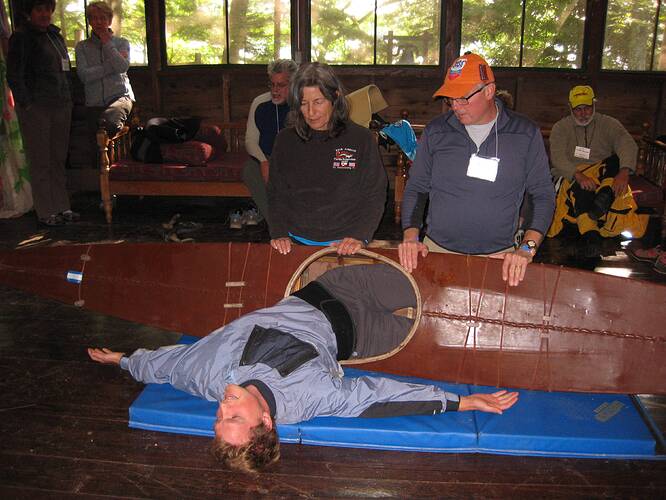 @Gamer202 said:
One problem I don’t have a kayak. Is there a way to practice rolling without a kayak.

There’s a good video called “This is the Roll” by Cheri Perry and Turner Wilson that contains some helpful exercises done without a kayak. https://paddling.com/store/this-is-the-roll/

Most Greenland style rolls, which is what appears to be covered in “This is the Roll” are quite different from the rolls commonly used in whitewater kayaking.

“Grace Under Pressure: Learning the Kayak Roll”: Kathy Bolyn, Tom DeCuir. This appears to be out of print. The VHS version of the video is available on Amazon. Used copies of the DVD can probably be found. This focuses on the C-to-C style roll.

“The Kayaker’s Toolbox”: Joe Holt (Producer). This, like “Grace Under Pressure” is also from the guys and gals at NOC but covers many aspects of whitewater kayaking besides rolling including boat control, water reading, river running, and safety, The C-to-C and sweep rolls are covered, but in less detail than the other videos. This one may also be out of print, but used DVD copies appear to still be available.

“E.J.'s Rolling and Bracing”: Eric Jackson. E.J. uses a bit different rolling style which is more or less a C-to-C hip snap with no or a very abbreviated set up and an emphasis on a lean backward toward the rear deck as he comes up. This is basically a roll with the emphasis on speed. It has erroneously been referred to as a “back deck roll”. The real back deck roll or “Rodeo Roll” is something very different.

Although I questioned whether it could ever happen, Pammy has apparently been able to reproduce. This is a truly sad day for mankind… :’(

@Gamer202 said:
… an instructor taught me rolling with a float bag on the end of the paddle…

Rolling is not usually a “one lesson” thing for most people. There are stages building up to rolling independently, then to rolling proficiently, then to rolling subconsciously. If you did, in fact, take some lessons, that’s good. But don’t stop there. Keep at it and don’t try to take short cuts with something that could save your life or end it.

And then, once “mastered”, never rely on your roll as the only thing that will save your life. Use good judgement and have a backup plan.

Pammy was silly, but harmless.