I wonder if a canoe on the roof while pulling a trailer helps with aerodynamics? With fuel prices anything that helps is welcome. 38 gallons @ over 6 dollars a gallon …

Its still like driving a barndoor down the road. 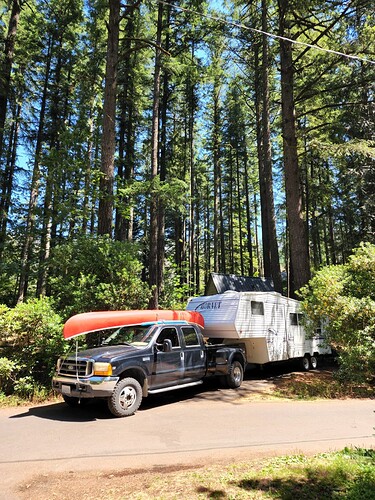 Too bad it doesn’t fit in the camper.

Of course it helps, so it only makes sense to always take your boats camping with you.

More stuff you can carry at once less trips you two have to make. So there must be some economy in that

Since canoes are designed to be hydro dynamic they should be able to slip through air with ease. Add 3 more canoes and you’ll be getting to your destination at 70 mpg.

But he will drive the truck above the canoe hull speed…

It does for us. Two canoes and a 26 foot TT. The canoes allow a more gradual increase in the upward deflection of air and and our TT has about two feet over the canoes. Not the usual five feet. Yes its still a box but we are dragging a shorter in height box. Seems to increase the mpg by one on the interstates. However most of our hauling with TT is on logging roads ( five hours today) so the impact of canoes on helping gas mileage at an average speed of 14 mph is nil.

It makes no difference in mileage in my old Tundra.

Luckily no free surface while driving in air, so no hull speed to consider, although breaking the sound barrier would be a problem. Just keep the Mach number below 0.30 to avoid compressibility effects and it’s all good.

It probably helps with drag somewhat because the semi drivers put fairings on their trucks for this reason.
The definition of fairing: 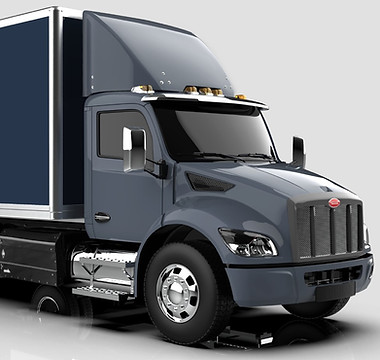 Staring at the bow of my Tripper for 400 miles got a guy thinking about the aerodynamics of watercraft on top of a vehicle; things like lift, drag, wind deflection etc.

Both ways, I lost approximately 2-2.5mpg in my Mazda 3. Normally I average around 30mpg. With the boats I was floating around 27.5-28. So definitely some loss but less than 10% on my small car. And I was driving 70-85mph the whole time, so overall I was impressed with the gas mileage.

A canoe has significantly more frontal area and is less aerodynamic than a ski, so I would expect slightly higher losses with an open canoe.

Considering the majority of drag is from the negative pressure bubble “pulling” your car backwards with force from behind, I would expect very little difference if you’re towing a trailer as your gross frontal area gross rear profile remains the same, plus the small difference a canoe makes compared to a 15k lb trailer. So bring them everywhere!

My standard traveling rig is a Chev 2500 with 6.6l diesel with two kayaks on top towing a 10,000 # travel trailer. Sometimes it gets 12mpg sometimes 14mpg. The boats are less of a factor than speed, grade, traffic, and stops/starts. Without the boats there is similar mpg performance.

Now on my Subaru Outback with it’s little opposed engine the 27mpg goes down with any roof loads to 23-25 mpg.

All this talk about what affects efficiency on the road has got me going back over my logbook. The truck is a 1904 6 cylinder four wheel drive Ford Ranger with factory installed towing package (larger tires and heavier springs than the normal Ranger with a 2" receiver installed, rated to pull 5000 lbs) that I bought in 2008 with 17,000 miles on it. With no load on a trip from Virginia to Florida and back it got about 23 mpg running at 55mph. Speed limit was 65 mph back then so we were a little less “in the way”. Shorter local trips including those little runs to town (about 5 miles) it usually gets around 20 mpg. Pulling an aluminum horse trailer with horse, total weight 3675 lbs, it gets about 17 and a half. A twenty mph headwind for half the last 100 mile round trip to the veterinarian cut it down to 16.4 mpg so stop and go, wind and weight seem to be the biggest factors affecting efficiency.

I added a rack for the 15’ 60 lb canoe and went from the Virginia Beach area to Roanoke on SR 460, four lane but not interstate. Going out at 55 mph it got 20 mph including going over the Blue Ridge mountains, a 2000 foot climb. Coming back I got in a hurry and ran at 65 dropping to 18 mpg. So add speed as a contributing factor but the canoe didn’t make much difference. The truck has over 100,000 miles on it now and all that it has required besides normal maintenance and tires is a new thermostat and muffler. Maybe driving a little slower has had other benefits. The Mustang I drive at what ever the speed limit is, mostly, and it doesn’t a have any effect on mpg but I haven’t tried to carry the canoe on it.

A 1904 truck is getting pretty old but with those miles per gallon it’s a keeper.

IMO sometimes they go in the wrong direction with new products.