I’m sure most kayakers will figure this out, but from non-kayakers I have: 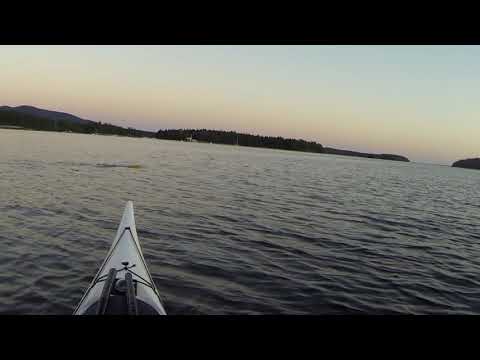 (Guess based on bulk, fur color, speed and that smooth trailing wake that suggests beaver. I’ve spotted them swimming across our big local empoundment, Lake Arthur, where the critters like to dam some of the feeder streams, though they are usually hauling leafy branches.)

I followed a bunch of heads once. When they emerged on shore I realized I was too close… Ursus americana and offspring.

I consider them (not the otters) an invasive species, even though they are known to have very low fertility.

In the North Woods there are no jellyfish, fast turtles or sharks.
Context is everything. Chances are willowleaf is right. There are only a couple of other possibilities.

I think most guesses here are following the stream.

In our area we have big squirrels that swim and leave that sort of wake
We have beaver too but never seen two like that.
They are a pest We are in violation of shoreline code and can be fined for clearing trees within 100 feet of shoreline
Yet the beaver fails to adhere to that though they have gone in back of my property and dragged trees several hundred feet to water!

And they have a perfectly round, smooth, shiny, yellow back?

I am pretty sure that kayakhank and I have given the correct answer.

It is a matter of perspective - what is moving in the video?

The lack of movement by the object is the tell-tail. The paddler keeps changing relative position making it appear that the object is moving.

castor can be ruled out for sure
no tail slap
no otter shape. But i got vertigo watching!

Wish i could watch it well enough to se if it looks like a submerged buoy in current!

Wish i could watch it well enough to se if it looks like a submerged buoy in current!

Using my iPad so I can zoom very close up, agree. One that broke loose or was set so far out?

One that broke loose

I am pretty sure it is anchored. Otherwise you would not be able to see the current in the water generating a wave around it.

Was thinking maybe it dragged from its original location as it seems far enough from shore to be a navigational hazard. But that could be an illusion as well.

This is just north of Bartlett’s Landing off the west side of Mount Desert Island Maine. The whole video takes place while the tide is rushing in.

Further up north are several large bays. Around this bouy the two channels surrounding Bartlet Island constrict, and the tide gets very fast.

I was fooled until I got close…the thing was getting some attention from the birds so I assumed it was wildlife…I had lost my glasses and didn’t want to take the backup pair out on the water.

As I wrote in one of the very first replies in this thread:
Pila Sustineo