Or am I the only potential doper?
My PT recommended it for a chronic muscle spasm in my hip.

I did pharmaceutical research on cannabinoids for a few years in the early 2000’s. Certain cannabinoids can reduce pain and interfere with neurogenic pain signalling; but I don’t think you will see any effect unless it’s a placebo effect. This is mostly because you don’t know what substances or the dose you are actually using in the oil extract. It does not hurt to try except that the sources of hemp oil are not well regulated and you may end up getting something that is not really hemp oil, does not have known concentrations of the relevant cannabinoids and very often is contaminated with harmful chemical impurities. My wife’s aunt tried for leg spasms and muscle pain and neurogenic pain in her legs and back; she did not have any improvement. You will find many many people who swear by it, you will also find people that swear by wearing copper bracelets and eating aloe vera plants. More research and testing needs to be done with well defined components of the extracts, and the extracts need to be well defined and manufactured under good laboratory practices. A lot of hemp oil sold in the US is chinese plant extracts that have been doped with small amounts of compounds that give the aroma of the real extract, there is a company near my family farm in Idaho that sells counterfit oil.

I suspected that but it’s worth a try since I already have it.

Hmmm. Sounds like SeaDart is the expert. I really like my Badger hemp oil because it’s non-toxic so I like to use it on my wooden paddle shafts. I think the little can was around $12 but I’ve had it more than 5 years. For pain you might try some CBD products if they are available to you. My understanding and my personal experience is that the CBD stuff is not psychoactive so if you’re hoping to get doped up you’ll be disappointed. I do a little weight lifting and paddle quite often and for muscle pain I like the CBD products. 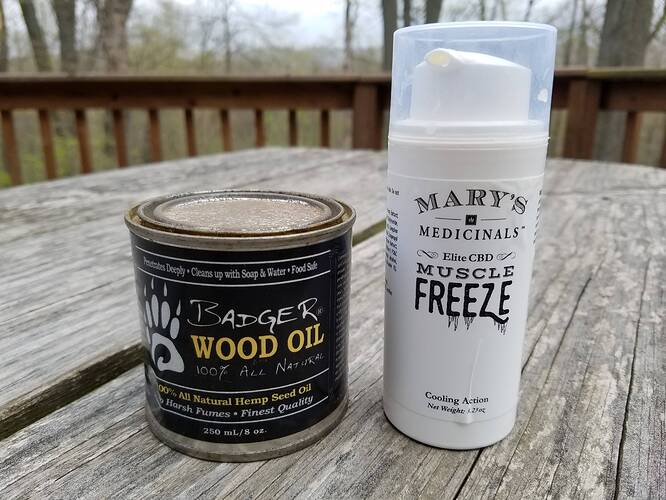 I am crazy enough without chemical help. Muscle only.

Wow. I came to this thread, thinking it was about choice of oil for finishing a greenland paddle…

Edit: TomL beat me to it.

I use Spar urethane on the blades and tung oil on the loom.

I’ve tried hemp oil. I didn’t notice any pain relief. As was stated , it is not regulated,what is in it/dosing? I have found good
results using CBD oil derived from cannabis purchased from a medical dispensory(Canada). CBD oil from cannabis has other compounds that work in concert with CBD that are not found from hemp.

My brother and sister-in-law swear by CBD oil, claiming it reduces a number of problems for them including insomnia, anxiety, gout and muscle aches. They take an oral spray or two per day. They gave me a bottle of it about 18 months ago but I have not yet tried it – no particular reason and maybe I will check it out since I have been having trouble with knee pain. But I am somewhat suspicious that their “benefits” are mostly placebo effect (the sis-in-law is very “New Age” and believes in astrology and crystal healing and thinks she “channels” ancient Inca spirits. Maybe “jaguar spirit” is helping the insomnia…)
Update: checked the CBD bottle in my medicine cabinet and it supposedly “expired” about a year ago.

On the other hand, I have found hemp oil based moisturizers are great for the skin.

Funny “weed” story: back during World War II the US Navy lost their usual sources of hemp fiber for rigging ropes due to the conflicts in the Pacific interrupting the Asian supply. So the US government paid farmers in the Midwest to grown cannabis, including both hemp and marijuana (depending on which variety did best in local soil and conditions). One of my dad’s cousins in Michigan (who we called “Uncle Dick”) was paid to grow it. He admitted that he used to rip a few flower “tops” off whenever he was running the cultivator through the lines and tuck them in the dash of the tractor. When they dried out he would add them to his loose tobacco in self-rolled cigarettes or a pipe, saying smoking a bit made the boring field tasks a little more “relaxing”.

When the war ended and the subsidies for cannabis evaporated he plowed the stuff under and replanted corn and wheat. But he said it took years to get the remnant weed to stop popping up in the fields and it persisted in the drainage gullies along the road and in the livestock pastures (the cows loved it.) During the mid 60’s to mid 70’s the students from nearby colleges (University of Michigan and Michigan State) would sneak into the edges of the farm and collect the remaining plants. He said he would sit out on the porch on summer evenings and watch with amusement as groups of them ran “stealth” raids on the ditch weed. He had a “help yourself” attitude but figured it was more fun for them (and him) if he let them think they were getting away with something.

Another (off topic) great story about Uncle Dick: after the Soviet Union collapsed there were thousands of new privately owned farms in the former Republics – since the large state-run farm operations had been run by “cooperative” committees, individuals and families lacked the broad range of skills to successfully farm on their own. There were several outreach programs that US farmers organized to train Russian farmers in the skills they needed. Uncle Dick hosted some on his traditional family farm and also visited the former USSR with a group of American farmers to inspect Russian farms. While in Russia he and the other Yank farmers were extremely impressed with the simple but incredibly rugged Soviet-designed tractors. He and several others arranged to buy and import them and he used one for years – claimed he could “plow granite” with it and that, compared with the fussy electronics and complexities on US tractors, you could fix anything on the “Russki brute” with bailing wire and a large hammer.

Even if it is a placebo effect; that would be a positive!

One of my nieces uses a CBD oil patch from a local dispensary for her fibromialgia pain and, from what my sister told me, it gives her some relief.

@willowleaf said:
“During the mid 60’s to mid 70’s the students from nearby colleges (University of Michigan and Michigan State) would sneak into the edges of the farm and collect the remaining plants. He said he would sit out on the porch on summer evenings and watch with amusement as groups of them ran “stealth” raids on the ditch weed.”

I was a graduate student in Chemistry at Ann Arbor in the early 80s and I can verify that there were still strains of hemp plants that had quality THC concentrations growing in ditches and hedge rows outside of town. I had two friends who were into bicycling and once in a while we would do an 80 mile loop on early saturday mornings, Scio Church Road, Pleasant Lake out to Chelsea, Dexter, then north then “Joy Road” (wink wink) back to Ann Arbor heading east. On our first trip it was really hot and we pulled off into some woods and the botanist who was graduate from BYU and not into medicinal herbs showed us an enormous patch of weed, the physicist called us up later to confirm that it was good stuff. I don’t partake either but soon we seemed to recruit several friends for our Saturday Morning rides. 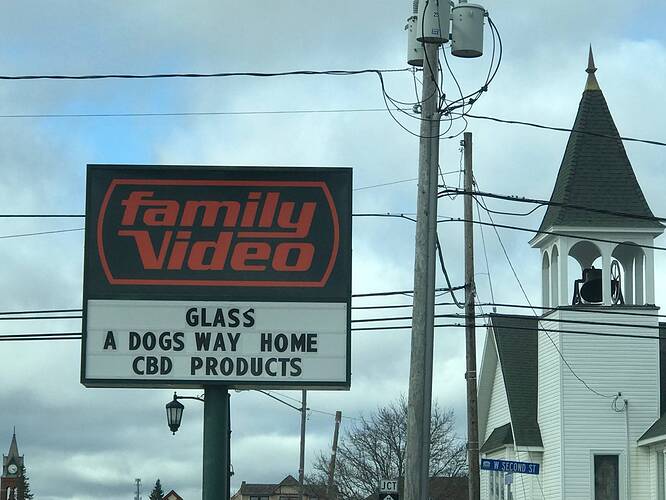 I saw the warnings about Chinese made stuff so I went to a reputable store. The stuff lists the supposedly active ingredient in mg.
Yesterday it seemed to help. Today , not so much. Maybe it was the 4 Roses yesterday.

You need to move to Colorado, Washington or California. Skip the hemp oil and go for the potent cannabinoid 2 receptor agonist brownies. You’ll still have spasms, you just won’t care as much.

Down past West Second Street,
inspired by Methodist steeple,
you’ll find there’s signs of life,
for all the smiling people,

And through one’s looking Glass,
there dogs a wagged behind,
smoke signaled happy home.
Don’t forget to rewind.

SeaDart: Uncle Dick’s farm is near Williamston, quite a bit farther from campus than Chelsea. It’s a Michigan Sesquicentennial Farm (complete with bronze “hysterical” marker) at 1498 Meech Road. Nice bicycling area, gently rolling country roads. You can spot it on StreetView on GoogleMaps.

Our 4 times great-grandfather and his brother walked and hitched rides on wagons and canal boats from New York City to Detroit in 1831-32 to the Federal land office in Detroit to buy farmland there. They were offered some 160 acre parcels that they declined (did not feel the tracts had enough timber or water.) The land they turned down is now the U of M campus (my Dad, who was born in the front parlor of that Meech Road farmhouse in 1924, taught at U of M and got his Masters and PhD there).

After the son of the ancestor who founded the farm served in the Civil War, and saw how many farmsteads were burned to the ground, he came back to Williamston and built the concrete house that still stands on the site, using pea gravel from a glacial deposit on the land. The thing has 15" thick walls and could probably withstand a nuclear blast, but my kin who still live and farm there say it is like an oven in the Summer and colder than a witch’s tit in Winter.

The family archives are still there which we get to look at during family reunions. They include hand-written deeds and records of ancestral military service going back to the Revolutionary War.

I may ask next time I am there if they might consider going back to cannabis (hemp or pot) farming if the state of Michigan legalizes the stuff. The stuff certainly likes that soil and weather.

@SeaDart said:
You need to move to Colorado, Washington or California. Skip the hemp oil and go for the potent cannabinoid 2 receptor agonist brownies. You’ll still have spasms, you just won’t care as much.

Bourbon does the same.

Hip very unhappy this am. Rubbed it with Straight Hemp(brand name). Spasm left and hasn’t returned . 2 for 3.