Are Pelicans as bad as I think they are?

Pelicans are the best $200 kayaks available.

I started in a pelican and after a year bought a wilderness systems. I found the pelican to be durable (it launched on my roof twice at high speed) and it got me into kayaking. With that being said after I bought a new pungo I was like damn I am comfortabe and this thing is much faster (both yaks are the same length)

If you launched a kayak twice you better stay off the roads.
The person you kill might be me.

Our neighbors bought matching Pelicans. I took them paddling and thought we’d never get off the lake.The woman was a decent paddler and sort of kept up. I was literally only half paddling and I was in a rec boat.

You lost your boat off the roof of your car twice? This belongs in this thread

I am currently car-topping a pair of kayaks, 12’ and 14’, on a roof rack equipped with Malone Seawings. We are planning on selling this car and buying a pickup truck, this fall/winter. We are considering carrying the kayaks inside the bed of the truck, using a truck-bed hitch-extension. Obviously we will need to pad and secure the kayaks well and use a flag at the back. The truck bed is just over 5’, the tailgate adds about 18" and an extension adds a few more feet, but we would still be stic…

Kinda like Budweiser. Hard to even call it beer but the brewmasters are none the less amazing. It is actually fairly difficult to make an exact same beer over and over with no detectable differences, especially when it’s pale and lacking strong flavors.

I feel like it is the popular/herd mentality to knock the Budweiser’s of the industry—especially because of the target audience that these mass produced pilsners appeal to (not typically of the most refined, discerning tastes, lol).

That said, pilsners are actually one of, if not THE most difficult types of beer to pull off. The amount of refinement & attention to detail from begging to end presents quite the challenge to beer masters.

Being born & raised in St. Louis, I was a loyal AB consumer up until the InBev merger/buyout. After that shakeup, my loyalty was no more. Soon thereafter, STL experienced rapid growth in local craft breweries as loyalties city-wide, likewise dwindled.
Since then it’s been all craft breweries for me, & I’ll drink anything that’s not an IPA—sours are presently my jam.

When I’m hanging out w/ my less … sophisticated/woke beer brethren, I’ll only have a Bud when it’s a last resort.

One Budweiser gives me a headache and it has all my life. AB’s other products, Michelob or Busch, that is not the case until approaching huge quantities consumed (in a former drinking life but would probably occur today too).

Pelican sit-ins seem to always cause a headache (just like Bud) as they seem to join or want to join a paddle event for which they are not designed or safe for the group.

I carried 2 14’ kayaks in my PU bed yesterday , like I do every week. I use an extender and strap them firmly. And have for years
After a couple of beers, who can tell the difference?

Not a popular to do thing. Simply wondering how something so lacking in flavor or distinction could be so popular!
However, as a homebrewer I do know the number of variables involved and know that producing billions of gallons of identical beer requires skill!
I have never made a pilsner or scotch ale yet because as you said, there are special differences. The yeast is much more temperature sensitive than your typical ale yeast.

Sounds like you need to learn how to secure a boat. Hoping I never end up behind you

No. I really like pelicans especially the big white ones. They are the best indicator of forage fish nearby. The brown pelicans on the Coast are a little more aggressive.

I have 3 Pelican Argo 100s (the 10’ model sold through Academy). I’ve been in expensive boats and in these. You can tell they’re inexpensively made, but I wouldn’t call them “cheap”. They’re tough and I have had no oilcanning issues whatsoever. Durability is not one of their problems. The original poster here called them “heavy”. That certainly is not true. They are really light. You can carry one with one arm easily.

They are great for a day out. That said, they do have their flaws. They’re slow. It feels like they produce a lot of drag. You can make them go, but it takes a lot of energy. Tracking isn’t great. You will see the more expensive kayaks disappear into the distance, certainly.

Overall, I don’t think they’re bad boats. You won’t win a race, but they’re really easy to use and really easy to cartop because of their super light weight.

My son bought me a 10’ Pelican new for $169. This was before I got into sea kayaking. I had years of canoeing under my belt already. I thoroughly enjoyed it, was lighter than my fiberglass canoe. I even played in the surf with it. I did add floatation. When I hooked a big Blue Cat it took me for a ride before landing it. I don’t paddle it these days. I like my Kevlar solo and Royalite solo canoes better, and my sea kayaks better too, but have nothing against the less expensive rec kayaks. Took the little pelican down spring runs in FL, and rivers, marsh, and ocean here in SC. There isn’t anything performance about it, but it is a versatile small watercraft which was lots of fun. Sure got our monies wroth out of it.

I just bought a Mustang 100X because I wanted something relatively light weight and because it’s virtually impossible to buy kayaks right now due to covid frenzy. I’ve read all the posts and think I’ll be able to use it in a limited way until I can find another. I took it out on the Hudson by Kingston and it was fine. However, right after I got out a huge vessel created large wake. Since it seems that I can’t get a sprayskirt for this model, would pointing into wake be sufficient to prevent swamping the boat?

Hi, welcome to the forum! It’s a font of great info, and I hope you’ll enjoy it.

So, not to be a bummer but the Hudson is still very cold now (upper 40s or so) and it’s dangerous to go out in an open cockpit boat without a sprayskirt and proper immersion clothing. I have a sea kayak with a spray skirt and have had lessons (I’m no expert for sure but let’s say I’m an advanced beginner), and I am not going out until the water warms up quite a bit more, since I don’t have a dry suit.

It’s a smart idea to read about cold water safety, especially for kayaking in a big body of water with waves, currents, tides, and wakes from larger boats, before venturing out. I’d even say you shouldn’t go out on the main body of the Hudson in a recreational boat like that, which is intended for still, calm water, though of course many people do.

Hope you will be at the start of a long fun trip into the hobby.

Yes, point the bow directly into the wake. And learn how to brace.

As noted, yes, if you can, point into the wake. It is also good to learn how to let the kayak rock underneath you while you keep your upper body vertical. A bit harder to do in a craft that has a high initial stability and doesn’t have good contact with you but it can be done. Remember “Loose Hips Float Ships”. 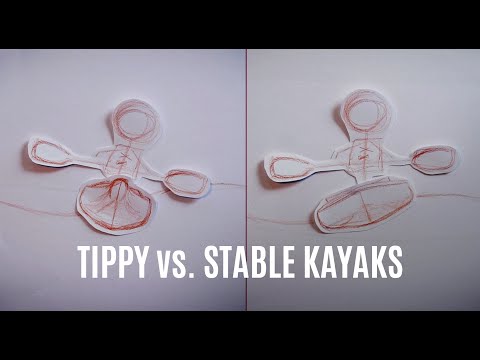 No, but those low-end, entry-level boats also serve a purpose. They help introduce new people to the sport at a very affordable price point. They are not the best and they are not the safest, so I see it as our job to educate people on what the trade-offs are for the attractive price point. It sounds like you are doing just that. Depending on what somebody wants to do in a boat, these boats can be just fine and provide a lot of fun and exercise.

Pointing into the wave is always the best choice, but it will not guaranty that the boat will not swamp. I pointed into a large wake thrown up by a fast moving tug on the Patapsco River in Baltimore and the breaking wake hit me in the chest washing completely over the boat from bow to stern. Fortunately I always wear a spray skirt, so it was no big deal.

Taking large waves or wakes anywhere other than on the bow or stern risks capsizing if you do not have a good brace and balance.

Pelican describes this kayak as designed for fishing and as others have pointed out it is not really suitable for big open water. It will be fine on protected waters though and will be good for fishing, photography, and general exploring.

Always wear a PFD and dress for immersion. If a spray skirt can be found to fit, it would be a good idea. Skirts on boats with large cockpits will generally not withstand dumping waves, but will usually keep out water from smaller waves and wakes. It only takes a few inches of water sloshing about in a kayak to make the boat dramatically less stable. Do not wear a skirt unless you have learned how to do a wet exit and are practiced and completely comfortable with it.