Are whistles as loud as 12v boat horns?

i came across this review , where several whistles, disposable marine horns, and 12v boat horns, with /without trumpets were tested, 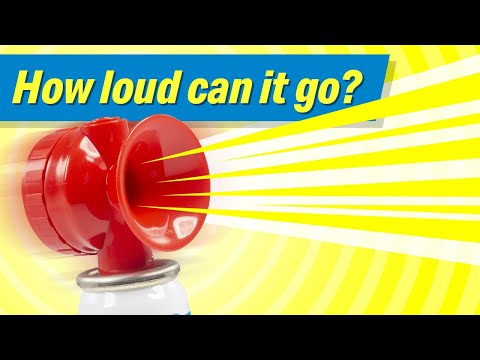 they all gave output in the range of 110-120db, the whistles came out the loudest
i was surprised by the 12v results.

going by this, would it be correct to conclude there would be no need to carry both a horn and a whistle on a kayak?
thx

Whatever blows your skirt up.

Your only need one signaling device. Whistles don’t fail or run out of air. You can keep small air horn with you. Keep whistle hanging on you PDF so you can grab it in a second.

I both sail (35’ keel boat) and kayak. On the sailboats we use air horns (like this), and they are most definitely louder than the whistle I carry on my PFD for kayaking.

Storm whistle is the loudest whistle in world. Used for safety in survival, camping, military and personal protection. The Storm Whistle is the best sports, rescue, referee and emergency safety signal available. Being totally waterproof, the...

While the decibel scale is useful for comparing loudness at any given pitch, it is less useful when comparing higher frequency and lower frequency sounds, especially at a distance.

I’d like to see them (whistle vs horn) tested in real conditions, eg outside surf line trying to alert someone on shore.
Wonder if the high pitch whistle, or the horn would be more noticeable.
I would guess the horn.
I was in a situation once, trying to alert coast guard several hundred yards away (they were sitting at mouth of jetty entering the sea, very noisy (surf) conditions).
Granted, it was a cheap whistle (the ones that come with pfd), but as much as I tried, couldn’t get their attention. Waving the paddle did get their attention.
(the coast guard was coming to rescue a wind-surfer who was being pulled out to sea (current). I was in the process of paddling him back in when the coast guard arrived.)

There are a couple of things about the tests that could be misleading. One is that the human ear is most sensitive at middle frequencies with the sensitivity gradually dropping off at higher and lower frequencies. Decibel readings can be adjusted for this using a weighting function. For the human ear’s response, “A” weighting is used. That’s why you often see sound measurements reported as dbA. The tester’s meter may or may not have been set on the dbA scale.

The other factor is the way the sound propagates. A horn with a trumpet shape focusses the sound in one direction. Thus, the sound pressure at the source results in greater sound power at a distance. Kind of like the difference between an ocean wave traveling in one direction versus the rings you get when a stone is dropped into a pond.

So the whistle has two disadvantages. It’s higher frequency is in a range where the human ear is less sensitive. And the sound propagation is less directional.

Whistles don’t need an air supply, can be on your vest for instant use, are more dependable than can of gas.

I have smaller and larger air horns for boat and kayak. Boaters may pay more attention to an air horn. They’ll think a boat is bearing down on them. They hear a whistle some are so dumb they’ll think a game is starting.

Pbailey and Wolf nailed it. The YouTube video talks about loudness but his equipment cannot measure loudness. And with no standardized test procedure the numbers he generates are meaningless and cannot be compared to claims made by other manufacturers using unknown test procedures.

The air horns are really loud. Perfect for marine use. They come in all sizes.

I have scared wildlife away from the house like large packs of coyotes.
I saved our group from a direct collision with a ski boat once with a loud blast from an air horn.

West Marine sold a breath-powered miniature airhorn that I bought years ago. It was loud, though I don’t have any measurement of how loud.

It sounded just like the little airhorns made for use by cyclists to deter mean dogs.

Who’s strapping an air horn to their pfd for immediate use? 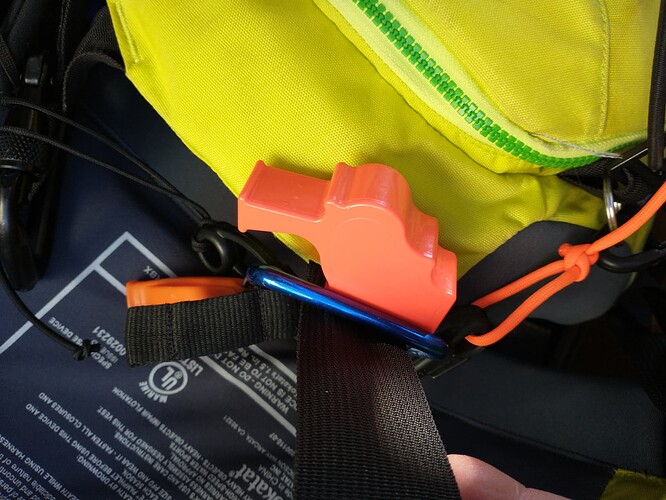 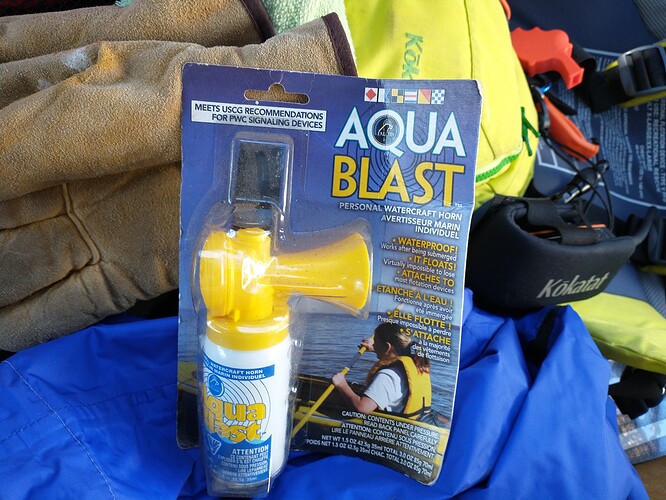 Small horn for yaking take both if need be but take a good whistle all the time.

If a power boater isn’t paying attention, neither is enough of a pick axe to wake them up.

Work hard enough on you paddling technique so you can get out of their way, they always think they have the right of way.

I actually use a plunger-type party horn. It looks like a silly toy, but my companions say they can hear it from further than a whistle. No gas can to lose pressure. I also have the usual whistle on my PFD. 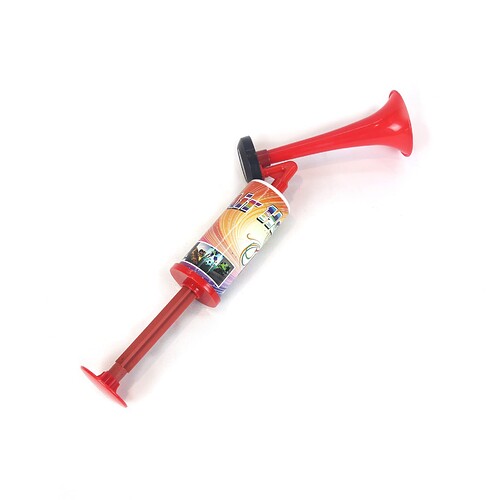 They hear a horn or a whistle. Boat doing 80 will take some skills to avoid if they’re coming at you.

At comparable loudness, low frequency sounds carry further and high frequency sounds reflect better, so an air horn is probably more effective out in open water. However, the best signaling device is the one that’s always at your fingertips. For me, that’s an orange plastic whistle clipped to my pfd.

A few years back did get a ticket from a Game Warden on Oklahoma for not having a whistle, even though I did have my little canned air horn. I would check the laws in your state to be sure what is acceptable. My whistle now stays clipped to my PFD on a lanyard, so I don’t lose it. Why take chances?

At the charity event Swim for Life on the Chester River off of the Chesapeake one year they gave all of the support kayakers those miniature compressed air horns. They’re pretty loud and fit in a pocket. I’ve had mixed results with whistles, even when trying to get the attention of a swimmer right next to me. I can’t imaging using a whistle to get the attention of a power boat bearing down on me. Still always carry a whistle to comply with USCG regulations. A compressed air horn should meet the regulations as well.